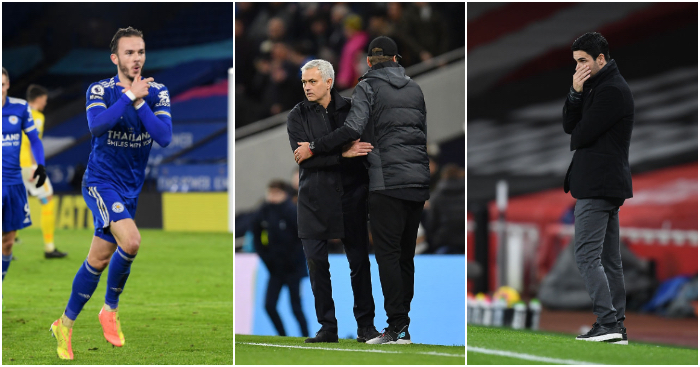 Game to watch – Liverpool v Tottenham
Weirdly, good results for Spurs against the Big Six are not necessarily the greatest determiner of their title credentials. Had Chelsea spanked Man Utd, beaten Arsenal and Man City, and drawn with Spurs they would be considered a far better bet to win the Premier League than Jose Mourinho’s side are right now. It’s the games when Spurs do have the ball, like the 1-1 draw with Palace, that could prove to be their undoing.

That said, even Jose Mourinho will have to admit – to himself at least – that his pony is very much a horse should Spurs beat Liverpool at Anfield on Wednesday. It would mean his side will have dropped just two points from their five fixtures against the Big Six, with three of those five away from home.

Fulham caused Klopp’s side all sorts of problems on the break in a first half on Sunday in which the Liverpool boss admitted his side failed “to get going”. Klopp said they “could have lost the game in the first half an hour” against Fulham. It was a sluggish start that Harry Kane et al will not allow to go unpunished should the same lack of intensity occur midweek.

Less arm-flapping frustration and more calming, palms-to-the-floor gestures will be needed from Klopp on Wednesday. Patience will be the name of the game for Liverpool, with Spurs set to prey on forced, frenzied football that opens up space for Kane to drop and Son Heung-min to run in behind what will again be an inexperienced, makeshift defence.

Player to watch – James Maddison
“I think we saw from his interview he’s probably struggling with a bit of confidence,” Jermaine Jenas sarcastically quipped on Match of the Day 2 after James Maddison said “I’m just as comfortable on my left as I am on my right” when describing his second goal in Leicester’s 3-0 win over Brighton.

Arrogance is deemed a positive or a negative by the eye of the beholder. ‘He’s got that arrogance about him’ or similar phraseology is among the highest praise a footballer can hope to garner from a pundit, while claims of Paul Pogba’s hubris – which would previously have seen him in that highly heralded club – is currently cause for his expulsion from Manchester United.

Maybe it’s the floppy hair, the penchant for going to ground, or the sheer cheek of being English and good on the ball, but Maddison – along with Jack Grealish – is criticised as much as he’s praised for that arrogance.

I enjoy it: the bits of flair; the flashy touches; the no-look passes. But whether you do or not, it’s impossible to suggest he’s anything but bloody good at football.

His second against Brighton was testament to his quality –  the stepovers to diddle Dan Burn, the fake with the right, before cutting back to his left and curling a shot into the far corner. There really are very few footballers in the Premier League who could have manoevred the space with such grace and executed the shot with such accuracy.

Maddison will have to be on his mettle against Everton on Wednesday. The midfield will be frantic and the Foxes playmaker will need a calm head on those talented shoulders in a game between two evenly matched teams, likely to be decided by fine margins and distinct moments of real quality.

Manager to watch – Mikel Arteta
He has the support of the Arsenal CEO (or he did before defeat to Burnley) thanks to his “extraordinary experience” and the relationship he’s formed with Edu and the technical staff.

But the bond with those actually playing the football is also historically pretty important and he’s barely clinging to a majority in the dressing room. Mikel Arteta really, really needs to beat Southampton on Wednesday.

One point from seven games is terrible; one goal in those seven games is embarrassing. Dan Storey pointed out a raft of Arsenal problems that can’t be pinned on Arteta in Premier League winners and losers, but many can.

Why did he push for Willian and why does he continue to persist with him? Why did he put the most trust in the most untrustworthy? Why has he not used those performing well in the Europa League in the Premier League? Why did it take him so long to put his only goalscorer in a position to score goals? And why, having moved that goalscorer into a position to score goals, does he instruct his team to swing crosses on to his head, with which he’s scored just three of his 74 Arsenal goals?

The crossing “pure maths” is pure nonsense. His unwavering belief in the tactic is akin to him using a knife to open a tin of beans and simply sharpening said knife when it doesn’t work with now bloodied fingers. Use a f***ing tin-opener, Mikel.

Southampton are likely to represent a continuation of the nightmare. Admittedly against a pitiful Sheffield United, Ralph Hasenhuttl’s side were very impressive on Sunday. Their confidence is as high as Arsenal’s is low and a fast start could easily see the Gunners crumble under the weight of Saints’ intensity.

Team to watch – Chelsea
“I keep reading how we have the strongest squad in the league. I don’t understand as the squads around us have won titles in the last three or four years and have players littered through their squad who are wingers scoring 30 goals a year, people who have won the league and Champions League.”

Frank Lampard can only be referring to Sadio Mane, Mo Salah and Raheem Sterling. Which suggests he’s absolutely not understanding what he’s reading.

Lampard is making a case against an argument no-one is making. No-one is saying Chelsea have the best team in the league. Liverpool and Manchester City have quite clearly superior first XIs, in terms of goals, experience and titles. But in terms of squad depth, Chelsea certainly have better options than Liverpool and probably Man City too.

A big squad doesn’t equal success. It will likely prove to be significant in this season more than most, but ultimately – and please excuse this foray into philosophical deep-thought – he can only play 11 players at a time.

To sign such a significant number of inexperienced players – talented and expensive though they are – and immediately win the title would clearly be an extraordinary achievement.

Which makes what is a clear tactic from Lampard to rein in expectations a bit unnecessary. Perhaps it’s a ploy to curb his, the players’ and the club’s expectations, rather than ours. Anyway, who cares if people say Chelsea – or any team for that matter – can win the title or not? They’ll be taking it ‘game by game’ anyway.

And next up for Chelsea is the Football Club Formerly Known as Wolves, who are suffering from a loss of identity amid a bid to take two steps forward after a step back.

With what are sure to be two hellish games against Atletico Madrid to come in the Champions League last 16 in the new year, Chelsea could do with a run of wins to give Lampard a chance to rest the best of his very good (best) bunch.

Football League game to watch – Reading v Norwich
Norwich will look to build on three 2-1 wins on the trot and solidify their position on top of the Championship as they travel to fifth-placed Reading on Wednesday.

Victory for Reading would see them move to within a point of Norwich and could see the top five in the Championship separated by a single point, should Watford, Swansea and Bournemouth all win.

European game to watch – Inter Milan v Napoli
Second-placed Inter Milan host third-placed Napoli in Serie A on Wednesday with the clubs separated by a point.

The feared duo of Romelu Lukaku and Lautaro Martinez scored two apiece across the two league fixtures Inter won last season, but Napoli got the better of Antonio Conte’s side in the Coppa Italia semi-final on their way to lift the trophy.