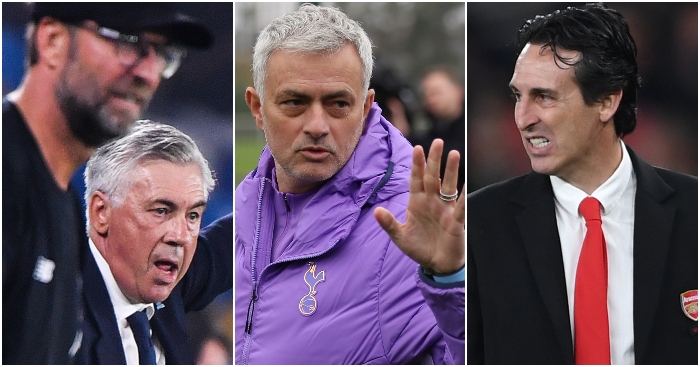 Game to watch – Liverpool v Napoli
Jurgen Klopp’s mentality monsters come up against the only side to have inflicted defeat upon them this season. In fact, in the four times Liverpool and Napoli have faced each other since last October, the Italians have won by an aggregate score of 6-1, having triumphed in two Champions League clashes and a pre-season meeting while only suffering a narrow defeat almost a year ago when all that stood between the European champions and group-stage elimination was a fabulous late Alisson save to deny Arkadiusz Milik.

The stakes for this Anfield meeting are not quite as high as Napoli’s last visit to Merseyside with top spot rather than qualification up for grabs. Liverpool will progress with a draw; a win would seal first place in group E, which would allow for some rotation in their final Champions League match of the year at RB Salzburg.

That may spell trouble for Napoli. Carlo Ancelotti’s side could go into the final match-day with Salzburg breathing down their necks while the Austrians play host to Liverpool’s Carabao Cup side. A win against opposition they appear to enjoy playing against would certainly ease those nerves.

Does Ancelotti indeed have the formula for stopping Liverpool? The Italian boss outsmarted Jurgen Klopp in the first of their recent meetings but in the two Champions League clashes since – one at each venue – Liverpool have displayed a wastefulness in front of goal which Napoli punished last time out. Had they done so at Anfield last year, the Reds would still be looking for their sixth European Cup.

Liverpool have injury boosts on two fronts. Mo Salah will be back after further problems with his ankle, while Napoli will be missing Lorenzo Insigne, who has an elbow injury. Resist the temptation to switch the channel as late drama has been a theme in this fixture, with Napoli’s three goals in Champions League clashes coming inside the last 10 minutes, while Alisson’s heroics were also reserved for added time.

Team to watch – Tottenham
Jose Mourinho‘s opening home match in charge of Tottenham should be more straightforward than his first assignment at the weekend, even allowing for West Ham’s wretchedness. All Spurs need to secure qualification for the last 16 is to beat Group B’s bottom side, in the process making their trip to Bayern Munich in a fortnight a dead rubber.

The result is what really matters – of course, this is Jose – but while the hosts look to put on a show for their new manager, the rest of us will continue to look for early clues as to what Mourinho’s Spurs will eventually look like.

Even after three days’ training during which Mourinho told his players to ‘feel their way into it’ rather than go looking to impress, we saw some hints as to what the Portuguese is planning. So far, no real surprises. Square pegs in square-shaped holes…

Mourinho fielded two defensive midfield players, with Eric Dier doing what he does while Harry Winks remained more conservative than he might have been under Mauricio Pochettino. That was to allow Serge Aurier to do what he does best, which isn’t defending. The right-back was more prominent in Mourinho’s attack than his defence, and against Olympiacos, that will become even more apparent.

Aurier’s presence on the right allowed the three other members of Harry Kane’s support team to almost move over one place. Lucas Moura coming inside pushed Dele Alli to Kane’s left shoulder, while Son Heung-min stayed closer to the touchline. From those starting positions, the front four swapped and changed, which was too much for West Ham’s excuse for a defence to comprehend.

Jose being Jose, we can expect little to change on Tuesday, though the winless Greeks arrive in north London under no obligation to attack. Can Spurs’ attack still find the same space against a side more willing and competent to sit deep?

Manager to watch – Unai Emery
We are assuming Emery will be the Arsenal manager come Thursday’s visit of Eintracht Frankfurt. As of 48 hours after the dismal draw with Southampton, the Gunners had not yet pulled the trigger so Emery may have escaped. For now.

Because it is surely only a matter of time before the Arsenal hierarchy decide they can no longer ignore the ‘noise’. Despite urging supporters to get behind Emery, the atmosphere at the Emirates on Saturday was one of anger and, even worse, resignation. More than 50 days without a Premier League win will do that to a fan base as entitled as those in the big six.

If boos aren’t doing the trick, then the sheer absence of an atmosphere on Thursday might prompt the board to think again. Eintracht Frankfurt fans are banned from attending and Arsenal ticket holders could be forgiven for thinking they have better things to do on a Thursday night at the start of the Christmas season.

For Emery’s part, it is hard to know what else he could do. The manager has tried everything – different formations, swapping personnel, exiling players, bringing some back – but none of the sh*t he has chucked at the Emirates wall has stuck. That doesn’t look like changing any time soon.

And it can’t be forgotten amid the crisis that Eintracht’s visit remains an important fixture for Arsenal. They sit at the top of Europa League Group F but the Germans could move to within a point of their hosts should they surprise nobody by winning at the Emirates. Standard Liege could also be looking over Arsenal’s shoulder come Thursday night a fortnight before they host the Gunners. Should Arsenal lose on Thursday to make that trip to Belgium a qualification play-off, Emery will surely be gone before the weekend.

Player to watch – Gabriel Jesus
The Manchester City striker might not be happy to see Sergio Aguero (one of our players of the decade) sidelined but the Brazilian will be cock-a-hoop to get a sustained run as Pep Guardiola’s leading centre-forward while the main man recovers from the injury he sustained against Chelsea on Saturday.

Guardiola, as ever, was gushing in his praise for Jesus before the visit of Shakhtar on Tuesday, the City boss saying “there is not another striker at his level that can be so humble and accept the situation as Gabriel”. Jesus is indeed willing to put side before self – but only for so long.

All Jesus can do in Aguero’s absence is exactly what he has done when given the opportunity so far this season. The 22-year-old has made only six starts in the Premier League and Champions League and he has scored or assisted a goal in each one.

City certainly need Jesus to hit the ground running. Aguero has notched 13 in 16 games this season, though his goalscoring has tailed off with only one in his last six Premier League matches after eight goals in his first six.

Guardiola knows City cannot afford to lose any more ground to Liverpool in the title race and he will want top spot in Champions League group C wrapped up this week so he can rest key players for the trip to Dinamo Zagreb in a fortnight. For City to achieve both ends, Jesus will have to make the most of his opportunity before his inevitable return journey back to the bench next month.

Football League game to watch – Ipswich v Wycombe
Sky Sports have every Championship match on offer this week, but with nothing grabbing us by the balls in the second tier, we’re looking instead to the clash of the top two in League One.

Ipswich have a couple of games in hand on Wycombe but Paul Lambert’s men would still trail the Chairboys by a couple of points should they win both of those but lose at Portman Road on Tuesday night. That and the bonus of an 11-point cushion in the automatic promotion spots is a teasing prospect for Gareth Ainsworth.

The Wycombe boss is looking for one last push as his side look to continue a two-and-a-half-month unbeaten run prior to a two-and-a-half-week breather before their next fixture. A win at Ipswich, where they are looking for a fifth consecutive clean sheet, would ensure they return from that mid-season break refreshed and still on top.

Ipswich have just about recovered form their wobble last month when they suffered their first defeat of the season at lowly Accrington and quickly followed it up with their second against Rotherham at home. Good job too, since they play first and fifth next, before two more tests against Bristol Rovers and away at a Portsmouth side rediscovering some form.

Promotion hopes won’t be ended or cemented at Portman Road on Tuesday night. But there is more riding on this for both Ipswich and Wycombe than a simple three points.