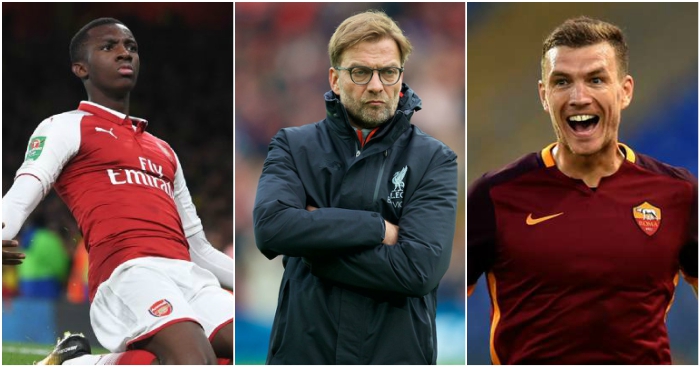 Game to watch – Napoli vs Manchester City
We picked this game last time and we’re picking it again. When you have two of the best footballing teams in Europe facing each other, you’d be stupid to miss it.

In fact, this game should actually be better than their fixture a fortnight ago, when Manchester City scored twice in the first 15 minutes to virtually kill off the game and looked sublime for the first half-hour. They then took their took their foot from the gas and allowed Napoli to grow into the match, but largely held the Italians at arm’s length.

Now it is Napoli who must attack as they sit three points behind a Shakhtar Donetsk team that faces pointless Feyenoord this week. Napoli really could do with a win to improve their chances of qualification for the knock-out stages. The thought of Maurizio Sarri’s side having to stream forward to service Dries Mertens and Lorenzo Insigne while Manchester City sit back and hit their opponents on the counter is enough to make your mouth’s saliva production go into overdrive.

Player to watch – Eddie Nketiah (Arsenal)
After a weekend during which England became the first country ever to win three major underage tournaments in the same year, the topic of pathways for young, English players is likely to again be thrust to the front of the agenda.

While no Arsenal supporter can truly pretend to be happy with life in the Europa League, it has given Arsene Wenger the chance to give first-team minutes to academy graduates who would otherwise have struggled for game time. Joe Willock, Reiss Nelson, Marcus McGuane, Ben Sheaf and Ashley Maitland-Niles are all aged 20 or under, all English and have all played European football for Arsenal this season.

That list is missing one player, Arsenal’s EFL Cup hero from last week. Eddie Nketiah played one minute as a substitute during the win in Borisov in September, but his goals against Norwich City will surely see him given the chance to start against Red Star Belgrade in a group that Arsenal have virtually tied up with three matches remaining.

In Amy Lawrence’s wonderful background piece on Nketiah last week in the Guardian, she quoted Bob Arber and Liam Brady, Arsenal’s head of academy recruitment and head of youth development respectively at the time of Nketiah’s arrival the Emirates. Both spoke of a forward who immediately understood the importance of seizing his opportunity following release by Chelsea. As with Marcus Rashford at Manchester United, for all the shock outside the club at Nketiah’s stunning domestic debut, those who knew him best were less surprised.

There is a certain similarity to the rise of Nketiah and Rashford, who also scored two second-half goals having been required in a time of need. Rashford stayed in the United first-team picture by continuing to score goals; he made himself impossible to ignore. Now Nketiah, left off the bench against Swansea in the Premier League, must do the same. If he is given the chance to start against Red Star, as most Arsenal supporters will hope, we may again witness the dawn of another young English striker.

Team to watch – Liverpool
A simple one this. Liverpool went to Slovenia and scored seven times, their record away victory in Europe. On Wednesday, Jurgen Klopp’s side entertain the same team.

Some games – see Napoli vs Manchester City above – are intriguing because both teams have such an individual style, while others are interesting because the two sides are so finely matched. Yet there is something slightly mischievous about watching a match because you expect it to be incredibly one-sided. It is slightly gauche to watch football as a neutral because one team might score a hatful of goals, but who cares?

Manager to watch – Zinedine Zidane
Zinedine Zidane is in a little bit of trouble. He may be the reigning La Liga and Champions League-winning manager, ensuring Real’s first double of that kind since 1958, but Zidane’s side have started the reason in comparatively dismal form. Barcelona already have an eight-point lead in La Liga, one which will require an almost unblemished record from now until May to overhaul, and failure to beat Tottenham in the Bernabeu means that top spot in Group H is far from secure too.

Having failed to top their group last season and still winning the competition, Real Madrid know only too well that finishing second behind Spurs would hardly be disastrous, but Zidane needs a performance and victory with swagger to allay fears that he is losing his grip on his squad. If the coach deserves patience as Real go through a transitioning period (many of their recent recruits have been with one eye on the future), you have haven’t met many Real Madrid supporters. Most expect success today as well as tomorrow.

The biggest question over Zidane is how he manages his forward line. Karim Benzema is woefully out of form and Cristiano Ronaldo struggling to get going so far this season. Isco and Marco Asensio are currently the two most impressive attacking stars of Zidane’s team.

Yet look at Real’s bench during their league defeat to Girona and you understand Zidane’s issue. Theo Hernandez is 20, Asensio and Dani Ceballos are 21 and Marcos Llorente is 22. In Gareth Bale’s continued injury absence, Lucas Vazquez is the wide reserve forward option but is hardly fit for purpose. Other than recalling Asensio at Wembley, Zidane has little choice but to try and get a sweeter tune out of the same players. And Mauricio Pochettino thought he was under pressure to keep his team moving in the right direction…

One-on-one battle to watch – Edin Dzeko vs David Luiz
I don’t get much right, but I did always think that Manchester City were wrong to get rid of Edin Dzeko. They got decent money for a reserve striker, and Dzeko himself did want regular first-team starts, but City seemed too happy to let go of a forward who offered a genuine Plan B. They replaced him with Wilfried Bony, and we all know how that went.

In Italy, Dzeko has blossomed into one of Europe’s best strikers. Having scored only eight times in his first league season, in 2016/17 Dzeko was one goal shy from becoming only the third player to score 30 or more league goals in a Serie A season since 1959. It was his goals that made Roma Juventus’ closest league challengers last season, and led Roma to their highest ever points total in Serie A.

He’s having a lovely time in the Champions League too. Roma were knocked out in qualifying by Porto last season, but Dzeko scored the winner in Azerbaijan and two goals at Stamford Bridge to take Roma to seven points from three games. Beat Chelsea on Tuesday and they will have virtually confirmed their place in the knock-out stages at the expense of Atletico Madrid.

Yet there is a backstory to that Stamford Bridge brace. Both of Dzeko’s goals came after the substitution of David Luiz with an injury. Luiz is so often derided, but had kept Roma’s dangerman in check, playing as a deep-lying defensive midfielder to protect the defence and marshall Dzeko when he dropped deep.

In Rome on Tuesday, Luiz will get to recommence his battle with Dzeko, this time as a central defender. Antonio Conte will know that if the Bosnian is thwarted, so too are Roma likely to be. A rejuvenated striker battling against an unconventional centre-back promises to be a wonderful watch.

Football League game to watch – Preston vs Aston Villa
It’s the only English league game on UK television between Tuesday and Thursday, so there’s that.

Can I claim that Preston vs Aston Villa will be better than Tottenham vs Real Madrid or Napoli vs Manchester City? No. But did those teams play each other as far back as 1888 like Villa and Preston? No, they did not. And John Terry might score an own goal, so that’s two reasons to get it up on a second screen.

European game to watch – Porto vs RB Leipzig
Of all the Champions League groups not involving English clubs, Group G is by far the most intriguing. Top seeds Monaco have only one point from three games, while third seeds Besiktas have surprised everyone by winning all three of their matches, including away wins at the group’s top two seeds.

That leaves RB Leipzig, Porto and Monaco, probably playing for one qualification place and thus making the fixture in Oporto between the teams who finished second in Germany and Portugal last season a fascinating and important game. The loser will effectively be eliminated from the Champions League.

A fortnight ago, Leipzig won a wonderful game in Germany 3-2, with all the goals coming in the first half. My advice on Tuesday? Sit back, turn on the television and watch a host of players who will be linked with £20m+ Premier League moves next summer.

Daniel Storey – Buy Portrait of an Icon: The book and help raise £35,000 for the Sir Bobby Robson Foundation.