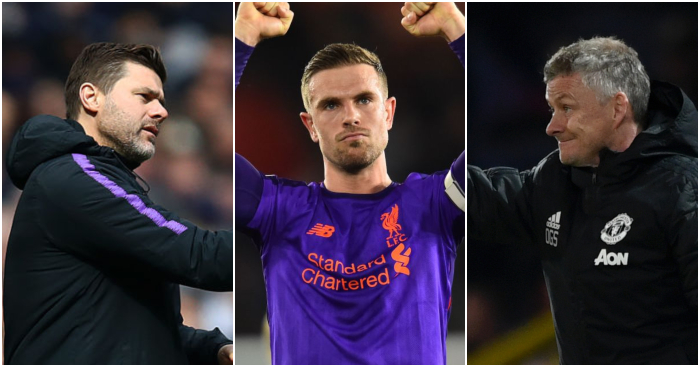 Game to watch – Manchester City v Tottenham
Manchester City have won 20 of their last 21 home games; Tottenham have lost six of their last seven away games. And that’s why Manchester City are still odds-on favourites to progress to the Champions League semi-finals despite being 1-0 down at half-time. As Pep Guardiola said in the wake of that rare defeat: “It’s not the best result but not the worst one.” Logic – and an 18-point lead in the Premier League table – dictates that City should still emerge victorious because they are the superior side. But this is the Champions League and Pep Guardiola has a history of over-thinking the Champions League. And that creates that little bit of doubt that means every bugger will be watching on Wednesday night.

Should City approach this like a Premier League game, a result similar to their last Etihad meeting might well be on the cards; they won that game 4-1 in December 2017, even with Eliaquim Mangala making a guest appearance at centre-half. Their front four of Kevin de Bruyne, Raheem Sterling, Leroy Sane and Sergio Aguero devastated Spurs that day. Trust the same quartet again – now supplemented by Bernardo Silva in tandem with Fernandinho – and it’s difficult to see Tottenham living with City. Liverpool could not live with them in January, and they are a far better side than this iteration of Tottenham.

But will Guardiola trust them? Can he be brave enough to take himself and his own insecurities out of the equation and trust that the best team in England can beat the third best on any given day, especially at home. There’s a time for tactics, a time for attempting to neutralise the opposition, a time to turn a contest into a battle, but this is absolutely not that time; this is very much the time to send out his finest players to outplay the opposition at the Etihad. It usually works.

Player to watch – Jordan Henderson
We have been saying for so long that Liverpool have suffered for the stodginess of their midfield that we had pretty much forgotten that they had a converted winger at the base of their midfield, playing in a role unsuited to his natural tendencies to chase, to run, to hound, to create, to operate at the edge of both penalty areas and every blade of grass between. It might be that Henderson’s conversation with Jurgen Klopp when he apparently pointed out that he was more inclined to play further forward – and Fabinho was a far better defensive midfielder – is the turning point of Liverpool’s season.

After 49 Premier League games without either goal or assist, Henderson now has three in two games as Liverpool hauled themselves back against Southampton and then devastated Chelsea in a handful of second-half minutes on Sunday. He was also excellent against Porto last week, though it was Naby Keita who received the plaudits. Jurgen Klopp will make changes after his new, dynamic midfield played against both Porto and Chelsea, but he must be tempted to leave Henderson in his line-up; right now, he’s so giddy that the last thing he needs is a rest.

Something wonderful is happening right now for Henderson at Liverpool. They love him. Not in a ‘he’s one of ours so we’ve got his back because nobody else has’ kind of way, but because they realise that he is driving on a Liverpool side that for too long seemed to have a gaping hole between stodgy midfield and devastating attack.

Never seen a player fight through so much hatred from his own fanbase and still absolutely boss it on the field, Jordan Henderson is a leader with a winning mentality.

Ole Gunnar Solskjaer has just spent the best part of 10 minutes signing autographs for #MUFC fans & posing for photos. A small gesture that will have meant a lot to those waiting in the cold outside Old Trafford pic.twitter.com/sanMTjNqVr

…for there will come a time when he has to be more manager than ambassador, more coach than a ghost of Manchester United’s more storied past.

That does not mean that Ole Gunnar Solskjaer has to orchestrate a victory in Barcelona – few managers can pull that off – but he does have to look like something other than the chump telling stories about past glories, even when the media are begging for those stories. In Spain, his team really must complete and they really must manage at least one shot on target. Nobody is buying the idea that Barcelona were somehow ‘flustered’ by United on Wednesday night; they simply did not have to be any better than average to win 1-0 and keep United at arm’s length. They were as ‘flustered’ by United as Manchester City were ‘flustered’ by Brighton in the FA Cup semi-final.

You might think that it matters little whether Barcelona win 1-0, 3-1 or 6-0 this week, but that would be naive. United have to return to England with even the faintest sense that they have the right to breathe the same rarefied air as Lionel Messi. This cannot feel like a mismatch, because United have to believe that they deserve to return and they have to take that belief into the final five games of the Premier League season. Over to you, Ole…what have you got in your locker apart from a nice smile and a lot of lovely memories?

Team to watch – Arsenal
Some games draw you in with the potential for astonishing football (see Man City v Spurs), and then there is Napoli v Arsenal and the potential for absolute and total humiliation for a Gunners side whose only away wins of 2019 have been at Blackpool, Huddersfield and now Watford. A 2-0 winning margin from the first leg at the Emirates means that Arsenal would get away with a one-goal defeat, but if Napoli score an early goal, what price the unseemly collapse of this Gunners side?

When you’re 2-0 up at half-time of a two-legged tie and even your manager says the chances of progression are 50-50, you know there is an issue. The first half-hour in Naples will be crucial but Arsenal fans will not truly get comfortable until there are fewer minutes on the clock than the potential margin of victory. Isn’t football bloody great?

Other European game to watch – Juventus v Ajax
The assumption is that Juventus will power through Ajax at home, but a little over a month ago, there was an assumption that Real Madrid would power through Ajax at home. Instead, Ajax won an extraordinary match 4-1 and have scored 24 goals in seven Eredivisie games since to return to the top of the Dutch league. This is by no means a foregone conclusion. Do not underestimate the will of a team that has waited 22 years to be on the verge of a Champions League semi-final again. Do not underestimate the quality of a team that contains at least two players who will be playing for one of European football’s elite clubs next season.

But then there’s Ronaldo. So they’re probably f***ed.

Non-Champions League (ha) game to watch – Nantes v PSG
“Against Nantes on Wednesday, we might have 12 or 13 players. We cannot go on like this.”

Can PSG actually clinch the Ligue Un title at the third time of asking? Hopefully not; this is hilarious.