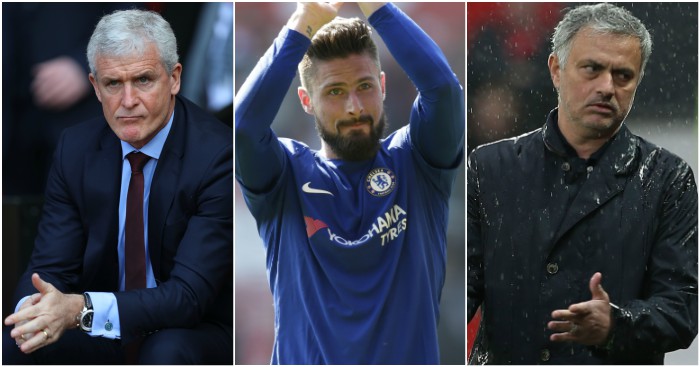 Game to watch – Brighton v Tottenham
It’s slim pickings this week, with Tuesday, Wednesday and Thursday providing this weekend’s FA Cup semi-finalists the opportunity to squeeze in the Premier League matches that were scrubbed to make way for a visit to Wembley.

That could be good news for Brighton, who will hope Tottenham have one eye on their weekend meeting with Manchester United. The Seagulls appear to be on safe ground in 13th place with 35 points, seven above Southampton in the final relegation place. But Chris Hughton will certainly feel more secure with another three points.

He may be a little concerned, though, when he wonders where that security might be found. Albion have fallen into another poor run of form just in time for what rivals Huddersfield’s as the Premier League’s most difficult-looking run-in. After hosting Spurs on Tuesday night, Hughton’s men have only one more home match – against Manchester United – with trips to Burnley, Manchester City and Liverpool still to come.

Prior to that, they’ve lost three of their last four, including the grudge match at Crystal Palace on Saturday. Tottenham also suffered defeat this weekend and while Mauricio Pochettino might now be coming around to the idea that the FA Cup isn’t the waste of time and effort he once thought, the Spurs boss will be looking closely to see how his men recover from having their 14-match unbeaten run ended by the champions.

Chelsea chipped three points off their advantage in the race for the Champions League spots and the AmEx offers the opportunity not only to put 10 points between themselves and the Blues once more, but a victory also mathematically confirms that Arsenal cannot catch them this season and cancels St Totteringham’s Day for another year.

Player to watch: Olivier Giroud
If the centre-forward doesn’t start for Chelsea at Burnley on Thursday night, then he probably never will.

Giroud came off the bench at Southampton on Saturday lunchtime immediately after the Blues had allowed Saints a 2-0 lead, with the France striker scoring twice to rouse Antonio Conte’s side from their slumber to achieve what appeared the most unlikely comeback.

It’s hard to quantify the difference on Saturday between Chelsea with Alvaro Morata as their front man, and the team led by Giroud through the last half-hour. Before Conte chucked on Giroud, his side were utterly abysmal, barely concealing their distaste at being made to run around in the sunshine. Morata typified that performance, with the Spaniard seemingly preoccupied and entirely at odds with everyone around him.

Giroud, though, had the bit between his teeth and a point to prove. He did exactly that, not only by scoring his first Premier League goals for Chelsea during his longest appearance of six off the bench, but his energy lifted the team behind him – in direct contrast to the effort of the man he replaced – and destroyed the spirit of the Saints, who surrendered their advantage in weirdly meek fashion.

If he hasn’t completely zoned out already, then Conte will be well aware that such willingness will be required again at Turf Moor. Morata already has a face like a slapped arse but Giroud has an opportunity to rub it in the dirt by condemning him to the bench at Wembley on Sunday too.

Team to watch – Manchester United
Jose Mourinho said too many of his players were “on the moon” last week after they delayed the inevitable and took City’s tables in the derby last week. The performance and subsequent defeat to the Premier League’s worst team eight days later should certainly return them to earth with an almighty thud. But, with some of these players in this squad, you have to wonder…

Having criticised United’s mental consistency following the 1-0 loss to West Brom, Mourinho would no doubt like to kick a few backsides back into space before they land in Bournemouth this week. But it is so hard to tell exactly what motivates this Manchester United. The squad, individually and collectively, is clearly capable of more than they offer, but too often they fail to deliver.

The manager’s tactics are usually the first fault to be identified but there is only so much any coach can do. Mourinho has got it wrong on a number of occasions but, as he is often quickest to point out, how can he carry the can when his players don’t follow their instructions or perform the basic tasks demanded of their roles?

Paul Pogba is the obvious culprit in that respect but he is by no means alone. The entire team faced West Brom with an arrogance they have yet to justify. Perhaps a midweek trip to the south coast holds similar appeal to a battle with the rock-bottom Baggies in the pouring rain, but Sunday’s more fundamental flaws need correcting before Saturday, when they have another wrong to right against Tottenham in the FA Cup semi-final at Wembley.

Manager to watch – Mark Hughes
“We’ve got a soft underbelly which we’ve had all year, apparently,” admitted Hughes after seeing Southampton capitulate once more, all the while trying to excuse himself from the blame for their longer-term failings. But in the month Hughes has had to sort out the Saints, they have conceded three goals in all three Premier League games he has managed.

Hughes pointed to a series of intangibles – “intent, understanding and confidence” – when asked what he had improved since he arrived but the manner of their surrender when Chelsea finally put up a fight on Saturday firmly contradicts that. The manager would likely point to the fact they have scored four goals against Arsenal and Chelsea, ignoring the obvious defensive flaw.

That has to be a huge concern for Saints fans. Prior to the 3-0 defeat at Newcastle that proved to be Mauricio Pellegrino’s last stand, they had not conceded three goals in a game in 12 matches. Now it is four on the trot, and Hughes has offered no evidence that he can mend a leaky backline.

He was sacked by Stoke with the Potters having the worst defence in the division and since taking over from Pellegrino, no side has conceded more than the sliding Saints. If Hughes is capable of organising a defence – in whatever shape he prefers – then the four days on the training ground before Thursday’s trip to Leicester is the time to prove it.

One-on-one battle to watch – Riyad Mahrez v Ryan Bertrand
One change Hughes has made to his defence is the release of his full-backs. Under Pellegrino, Bertrand and Cedric Soares seemed to be joined at the hip to their centre-halves, but Hughes’ switch to a back three has given the wing-backs far greater freedom to get forward, even if the door remains open behind them whenever they disappear beyond the halfway line.

In the last two matches, Cedric and Bertrand have provided an attacking dimension that Saints lacked prior to Hughes’ arrival. Against Chelsea, for an hour, Bertrand looked like the left wing-back Gareth Southgate is still searching for.

But Claude Puel will have watched his former team on Saturday and, while wary of Bertrand’s threat, the Leicester boss will relish showing Mahrez all the space he may have to play in at the King Power on Thursday night if Hughes sticks with his approach. Mahrez no longer has the hump – at least not so much that it is affecting his performances – and the winger is re-focused on putting himself in the shop window. If Southampton are to pick up some desperately needed points, they will have to find the balance between defence and attack on their left side.

The prospects of both sides took a hit at the weekend, when Tony Mowbray’s Rovers conceded a 94th-minute equaliser at Bristol Rovers, while Peterborough were beaten by relegation-threatened Rochdale. For Peterborough, it was a hefty blow. Three points at home would have taken Steve Evans’ side into the top six. As it is, they dropped to ninth, with a tougher-looking assignment ahead this week at Ewood Park.

With Rovers looking to strengthen their place in the automatic promotion places and Shrewsbury breathing down their necks, this clash featuring League One’s top scorer – Posh’s Jack Marriott – and Bradley Dack, the division’s Player of the Season, may well be worth taking in if Burnley v Chelsea isn’t doing it for you on the other side.

European game to watch – Bayer Leverkusen v Bayern Munich
If you want to watch something on Thursday from a setting slightly more continental than Lancashire then you are well covered, as is the case throughout the week. There are 21 matches being screened across La Liga, Serie A and Eredivisie, with Barcelona, Real Madrid, Atletico Madrid, Juventus and Napoli all in action.

To remain on that path, Bayern must overcome a Leverkusen side that have scored eight goals in their last two matches. Of course, domestically, Bayern are also in typically free-scoring form, having hit four, five and six in their last three games.

The other semi sees Schalke host Eintracht Frankfurt, meaning the DFB Pokal final may feature the outgoing coach of Bayern on a Treble mission facing his successor.