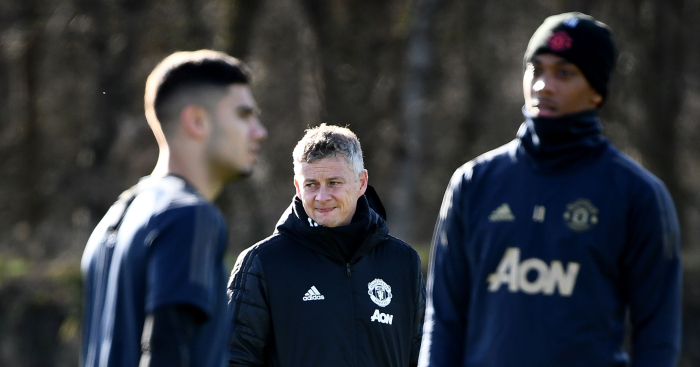 The Norwegian only played 29 minutes of that thrashing but still made his mark on his European farewell, assisting the final goal for Patrice Evra as United sauntered into the semi-finals.

It is that kind of “football heritage”, not the sort Jose Mourinho scoffed at and ridiculed the last time United reached this stage, that Solskjaer has long been keen to emphasise. His temporary reign has thus far revolved largely around emulating what was successful in the past to build towards a brighter future, and it has most certainly worked in the present.

So much so that United no longer approach this tie with trepidation. When the last-16 draw was made in December, they were priced at 50/1 behind ten other sides, with PSG the fourth-favourites at 13/2. Those odds are now 25/1 and 8/1 respectively, reflecting their contrasting fortunes since.

Mourinho’s side were one point above Wolves in sixth, 11 points behind fourth-placed Chelsea, and had a goal difference of zero in the Premier League when they discovered their fate. PSG had been beaten just once in 23 games, and had scored more than twice as many goals (17) as United (7) in advancing from a much tougher group.

Solskjaer’s men are now one point above Chelsea in fourth, have a goal difference of +17, and are looking up and forward instead of down and backwards. The intrigue is no longer in watching Neymar, Kylian Mbappe and Edinson Cavani toy with Phil Jones and Chris Smalling, but in seeing how PSG cope with Marcus Rashford and Anthony Martial.

As United have clicked into gear seamlessly in recent weeks, the French champions have stuttered and stalled. A 1-0 win over Bordeaux through a Cavani penalty prevented the mask from slipping, but there will be no surprise if it crashes to the ground sooner rather than later.

“I am worried, but only because we are missing key players,” Thomas Tuchel said at the weekend. The injury Cavani sustained just taking that match-winning penalty has placed him on the sidelines with Neymar and Thomas Meunier. The contrast with United – who confirmed that only Antonio Valencia and Matteo Darmian are unavailable for the first leg – is stark.

Not that Solskjaer will take anything for granted. He was more than happy to agree that Old Trafford has not played host to a “special” European night in quite some time at his press conference on Monday, adding that “we’re looking forward to this”.

As they should. With their form, fitness and faith so high, this tie has come at exactly the right time for United. By the same token, it has come at precisely the wrong time for PSG.

Player to watch – Angel di Maria
Hindsight does not look kindly upon Angel di Maria’s first words as a Manchester United player. Louis van Gaal, the man he has since described as the cause of his Old Trafford “problems”, was hailed as “a fantastic coach”; United themselves, always seemingly his back-up option, were “the only club that I would have left Real Madrid for”.

Any sort of sight looks even more harshly upon the Argentinian’s actual 11-month spell. A debut that came as an attacking midfielder in a 0-0 draw away at Burnley hinted at the difficulties he would face as a right winger, left winger, central midfielder and even a striker over the course of just 33 games.

The 30-year-old will not want to squander an opportunity to throw a spanner in United’s newly-renovated works. Di Maria has faced United twice – both times with Real Madrid in the last 16 of this competition in 2013 – but never since his brief spell in Manchester.

He will be desperate to prove a point about a mentality and character that was assassinated even before PSG rescued him in 2015. He has become an integral member of their squad, this already his fourth straight season of reaching double figures for both goals and assists in France.

The absence of both Cavani and Neymar is a double-edged sword. It will challenge a World Cup finalist and Champions League final man of the match to step up and shoulder responsibility, but even the slightest mistake will be pounced upon by a United crowd who feel he has never been able to cope with that sort of pressure.

The ‘complete fanny’ will either confirm or confute those long-held suspicions. His last game at Old Trafford was a woeful performance as a second-half substitute in a 1-0 defeat to West Brom in May 2015. He will hope for a slight individual and team improvement.

Manager to watch – Mauricio Pochettino
Since the start of December, Tottenham have won more games (13) than Borussia Dortmund have played (11). That disparity, a quite literally uneven playing field, is precisely the sort of “massive disadvantage” Mauricio Pochettino was at great pains to highlight on the eve of their meeting.

“It doesn’t mean that we’re not going to compete,” the Tottenham manager said. “For me, I’m going to stop describing the real situation, but I think there is no sense.

“I don’t want it to be an excuse. I’m not going to explain any more. I think today is going to be the last time I complain and I hope that you describe and send the right message, not ‘Pochettino is crying’. Only describe the situation.”

While much of that is offset by Dortmund having to travel to Wembley ahead of Wednesday’s first-leg tie, Pochettino and Tottenham are justified in seeing yet another deck stacked against them.

But that is the bed they have both made and laid in all season. No signings and no stadium, compounded by no luck with injuries, has cast Tottenham as the ultimate underdog. They have embraced that role and successfully maneuvered past almost every obstacle placed in their path, self-imposed or otherwise.

The flipside to playing so many more games than their opponents is that they have established a rhythm that Dortmund have long since lost. The Germans won 12 of their first 15 games in all competitions, and were not beaten in the Bundesliga until late December. Yet they have suffered for a lack of momentum, losing two and drawing two of their last seven matches, culminating in last weekend’s capitulation at the Westfalenstadion. Drawing 3-3 at home to Hoffenheim having led 3-0 after 74 minutes was not the most convincing of dress rehearsals.

Nor really was Tottenham’s performance against Leicester, but the result was yet another example of the durability and determination that should serve them well in Europe. After climbing out of the hole they dug themselves in the groups, Pochettino’s side will seek to deliver a first-ever home win in the Champions League knockout stages.

Team to watch – Chelsea
So long ago was Chelsea’s previous heaviest defeat that they subsequently beat the reigning Premier League champions – Graeme Souness’ Liverpool – in their next game.

The nature of the fixture list 28 years later means Chelsea will be unable to make such a similarly emphatic statement after their thrashing at the hands of Manchester City. Instead, a routine Europa League win away at Malmo would be a mere whisper.

Another loss is unthinkable. As Raheem Sterling fired the ball into the roof of Kepa’s net to consign Chelsea to a 6-0 defeat and condemn them to sixth place, eggs were suddenly being removed from the Premier League basket and placed into a rather more continental one.

The Europa League has taken on increased importance for the 2013 winners. Finishing in the top four of the Premier League is still absolutely possible, but the Blues must keep all avenues open for as long as possible, and Maurizio Sarri might find it easier to implement his style on European teams. Underestimating Malmo is not an option.

But then it really cannot be understated how disastrous another negative result would be in Sweden. Sixty-three days have passed since Malmo last played a competitive fixture, their Allsvenskan season not beginning until April. Even Gonzalo Higuain should be physically fitter than Thursday’s opponents.

Paul Scholes had better hope his new Oldham squad heed his first message as manager. A familiar face will hold his grudge for as long as is necessary.

European game to watch – Ajax v Real Madrid
One of only two ties in the round of 16 not to feature a reigning domestic champion still feels like one of the biggest mismatches in the Champions League knockout stages.

Real Madrid have finally found their feet after the sacking of Julen Lopetegui in October. Santiago Solari’s start was far from memorable, but they have won eight of their last ten games. The gap to La Liga leaders Barcelona is now just six points.

Ajax are staring at the same points difference to PSV in the Eredivisie, but their form has wavered. A 1-0 defeat to Heracles at the weekend followed a 6-0 win over VVV-Venlo, which itself came after a 6-2 defeat to Feyenoord.

If home advantage gives the Dutch side a flicker of hope, history provides a painful reality. Ajax last reached this stage in 2006, have not won a Champions League knockout tie since 1997, and have lost their last six meetings with Real at an aggregate score of 20-2. Best of luck.