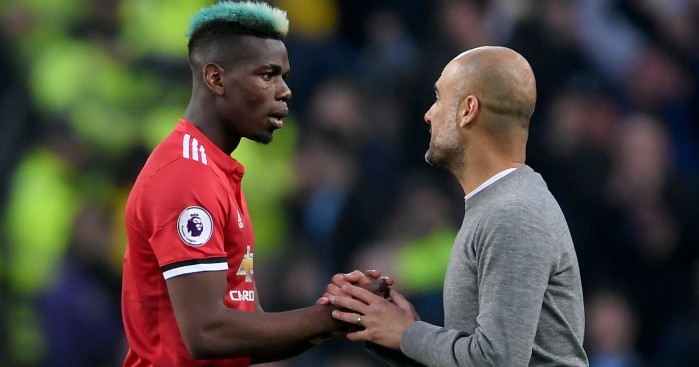 Game to watch – Manchester United v Manchester City
It is City with everything to play for and all to lose, but United’s disgraceful performance at Everton has somehow shifted the spotlight from the thrilling team in pursuit of a domestic Treble on to one for which three passes being strung together and the odd tackle would represent progress.

Ole Gunnar Solskjaer struggled to hide his fury and hurt at what his players had offered at Goodison Park by way of a response to last week’s surrender at Barcelona. Usually, it is far too simplistic to suggest that the root of an underperforming side’s problems can be found in their effort levels, but on Merseyside, it was clear to anyone with eyes that United were phoning it in. Their most shameful performance of the post-Sir Alex Ferguson era? Probably. Their worst ever in the Premier League? Quite possibly.

What does Solskjaer do about it? The temptation must be to sit some of his most pampered arses on the bench, but results elsewhere on Saturday, Sunday and Monday mean this was more of a missed opportunity than a calamitous end to their top-four hopes. Solskjaer’s approach will probably involve tweaks rather than an immediate overhaul while telling the players to claw themselves out of the hole they have dug, presuming they can be bothered.

In Paul Pogba’s case, that seems doubtful and scepticism surrounds any response from Anthony Martial that doesn’t involve a simple shrug. In the face of City on Wednesday, the France pair – and others besides – may well welcome the chance to sit this one out rather than step up to the challenge before them.

There are players who will be genuinely hurting over their current predicament, and though you might doubt their ability to prove the doubters wrong, at least the remorse seems genuine. Solskjaer’s young players may struggle for inspiration when they look around their own dressing room, but at least at Old Trafford this week, they be provided with the perfect example of just how far they have to go.

City, like Liverpool, have shouldered the burden of expectation brilliantly this term. But after the Reds passed perhaps their biggest remaining exam of the season, Pep Guardiola’s side are ready to show they have been revising too. United have fielded all the questions about character this week but that’s due in part to City and Liverpool already answering all of theirs.

Should City beat United, which you would expect even if the hosts offer something more than the mere illusion of effort, then it is difficult to see how they will drop points between now and the end of the season. After the derby, it appears a serene passage to nine points if the evidence of the previous four months and 14 wins out of 15 is anything to go by.

We know what to expect from City. From United? Not a clue.

Team to watch – Arsenal
“It was very frustrating because it was a big opportunity,” said Unai Emery in the wake of Arsenal’s woeful home defeat to Crystal Palace on Sunday afternoon. After watching two of their major rivals for the top four fall flat on their faces, the Gunners followed suit to chuck away a golden opportunity to move into third place.

Shkodran Mustafi made himself a convenient scapegoat with a series of errors that highlighted just where Arsenal must strengthen in the summer, but Emery should also have reflected on his own contribution before turning to the trip to Wolves on Wednesday.

Emery opted for a back three featuring Konstantinos Mavropanos, with Carl Jenkinson tucked to the right of Mohamed Elneny and Matteo Guendouzi. The manager had little choice, with Granit Xhaka and Aaron Ramsey both injured and Lucas Torreira not fully fit, yet Emery chose not to insure against a busy but ineffective engine room by supplementing it with expertise. The half-time change was too late; the problems could have been foreseen before kick-off.

Emery emphasised the positives at full-time and the Arsenal boss is right: their top-four hopes remain in their own hands. But the Gunners must quickly regain some form at Wolves who, despite their season appearing to peter out, love nothing more than sticking it to the big boys.

Arsenal are flaky away from the Emirates and despite the progress being made by Emery, questions remain of their mentality and their capability to drive home their advantage. Handily, their rivals appear similarly ill-equipped but the Gunners cannot afford to offer them any more opportunities when they head to Molineux. It will not be easy: Wolves have the best record against the top six of any team outside that affluent cabal.

Player to watch – Paul Pogba
After playing a shameful game at Everton, the United midfielder has talked a good one before the derby.

“Not to be disrespectful and I am not disrespectful on Everton, but the way we played and the performance of myself, of the team, of everyone is disrespectful. We didn’t respect ourselves, the club or the fans.”

Pogba trotted out some other cliches about “going back to basics” and “wanting a reaction” but, amazingly, the penny doesn’t seem to have dropped that it should not require a kicking of the like they have taken since Sunday to prompt the World Cup winner and his mates to pull their collective fingers out.

So, let’s see. Will Pogba be doing his “rubbish” jog as a means of pretending to track back like Gary Neville discussed on Sunday? Or will an improved performance be a satisfactory apology? Does it matter? With these players, it won’t be long before the next clusterf*ck, but maybe a brief spike will be enough for Liverpool, even if it isn’t for United.

Manager to watch – Chris Hughton
Brighton haven’t scored a goal for six games but at least they ended a run of five consecutive defeats at Wolves on Saturday by clinging on for the goalless draw they went to Molinuex for. In the context of their recent form, it was indeed a “big result”.

Hughton might also feel the point brought vindication in the face of criticism over his negative tactics. The frustration is understandable. Since moving into the top half of the table and 12 points clear of the drop zone in early December, the Seagulls have won only three of 19 matches, collecting 13 points during half the entire campaign.

Hughton’s response in going to back to basics is also easy to fathom. At Wolves, the Brighton boss fielded a team comprised of players from last season, those he knows he can trust to graft, with all the recruits signed last summer entirely overlooked. The selection prompts serious questions of the way the club conducts its transfer business, but Hughton will feel those can wait until the end of the season. He might not be around to answer them, mind.

What will he change when Brighton look to become the first visitors to score at the Tottenham Hotspur Stadium? Presumably nothing. The approach will likely be exactly the same, though relying on Mat Ryan to have another worldie in the Seagulls’ sticks is a risky strategy in the face of Spurs’ attack. Normally, Hughton might look at the trip as a free hit, but with Arsenal and Manchester City among their final three opponents, Brighton cannot afford to simply write off the points.

Football League game to watch – Luton Town v AFC Wimbledon
After being spoiled over the Easter weekend, most of the Football League puts its feet up until next weekend. League One offers a couple of games on Tuesday evening with ramifications at both ends of the table but you won’t be able to watch them on TV.

Leaders Luton re-established their title credentials on Saturday evening by winning 3-0 at Accrington after Charlton had ended their 28-match unbeaten run the previous week. Arses are squeaking at the summit, with Barnsley, Portsmouth and Sunderland all still eyeing promotion, but the Hatters can go a long way to ensuring they are all fighting for second place by beating AFC Wimbledon.

A shock win for the Dons at Kenilworth Road would see them climb out of the bottom three and potentially up four places above Accrington if Stanley fail to get anything against play-off chasing Doncaster at the Keepmoat Stadium.

European game to watch – AC Milan v Lazio
The goalless first leg of the Coppa Italia semi-final took place two months ago, which is usually long enough for any needle to dissipate. But, handily, Milan and Lazio met in Serie A last week and the subsequent hostilities give the second leg at the San Siro a tasty edge.

Milan won that league encounter 1-0 with a late penalty but the melee at full-time made most of the headlines. Gennaro Gattuso gave himself a thigh strain running over to get involved but the Milan boss insisted he was wading in to act as peacemaker.

“When I was a player, this sort of thing fired me up, but now I see it with different eyes and am too old for that,” he protested afterwards. “Plus, if I launch a slap, I’m very likely to get one back and they’ve all been to the gym more than me.”

So if there’s not enough snide in the Manchester derby on Wednesday, flick over to BT Sport 2 for round two.