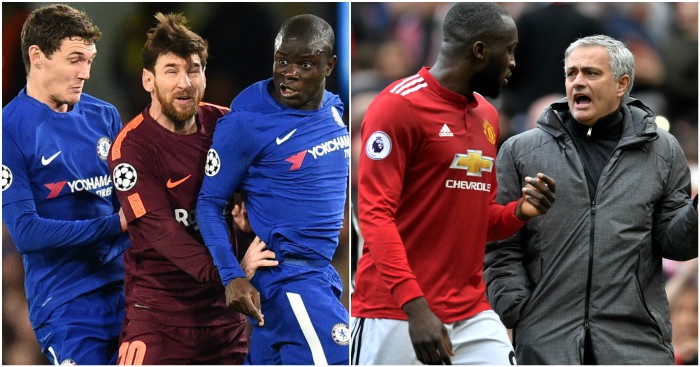 Match to watch: Barcelona v Chelsea
Aside from the quarter-final place at stake at the Nou Camp, bragging rights are also up for grabs in a rivalry which sprang from nowhere after Roman Abramovich’s takeover to become one of Europe’s biggest cross-border grudge matches.

Lionel Messi said in 2006 that “there are players here who hate Chelsea more than Real Madrid”, while Andres Iniesta continued the theme three years later: “This is a derby, a clasico, as much as playing Real Madrid is.”

Familiarity bred contempt throughout eight meetings in five seasons between 2005 and 2009. It was a period that saw Barca come to regard Chelsea as the antithesis of how a club should  operate. The Blues were an oligarch’s plaything, one that chased trophies by whatever means. Barca, as a supposed utopia of fan ownership, saw themselves as playing a very different game, even if they have dipped their toe in murkier waters since.

Since 2009, prior to the first leg at Stamford Bridge three weeks ago, Barca and Chelsea have only met once, though the 2012 semi-final still left the Catalans seething. As well as contrasting principles, a large part of the Catalan club’s resentment towards Chelsea stems from the fact that the Blues were rarely bested by Barca. The Premier League side go to the Nou Camp on Wednesday with an eight-game unbeaten streak against Barca behind them.

Of course, that matters little after kick-off this week, but Chelsea remain a stone in Barca’s brogues. Ernesto Valverde admitted that his side “began to subconsciously think about the match on Wednesday” during the weekend win over Malaga, going further to admit that his men “will have to suffer to progress past Chelsea”. For all Barca’s supreme talent and flying form in contrast to Chelsea’s inconsistency, Antonio Conte’s side have more than one blueprint for squeezing the life out of their hosts.

Team to watch – Arsenal
The Gunners appear to have clawed back some confidence following their wretched run that saw them lose four games over three competitions prior to last week’s Europa League last-32 first leg in Milan. But that 2-0 triumph at the San Siro came as a bigger surprise to many than a possible second-leg capitulation on Thursday. We’ve seen it all before from Arsene Wenger’s side.

And Milan are in no mood to lie down and have their bellies tickled by the Gunners. Genaro Gattuso rates his side’s chances at 30 per cent, which may seem optimistic, but the coach admits the Rossoneri “just got that game wrong against a strong Arsenal side”. Before that, Milan had not lost in two and a half months, while they responded to the defeat by beating Genoa 1-0 on Sunday.

With Milan and Gattuso set to come out swinging, the first goal at the Emirates will be all-important. An opener for Arsenal will settle the players’ nerves and those of whatever number is defined as a sell-out crowd this week. One back for Milan, and you watch the Gunners’ backsides twitch.

Player to watch – Eden Hazard
“There is more to come from me in this competition,” said Hazard before Chelsea hosted Barca in the first leg. Now would be a mighty fine time to show it.

Hazard struggled at Stamford Bridge, thrust again into a false 9 role and given the responsibility of leading Chelsea’s attack. He was well shackled by Gerard Pique and Samuel Umtiti before he was subdued even further, perhaps by his own coach, when the Blues went to Man City last week.

The Belgium star didn’t bother to hide his frustration after Chelsea’s approach had left some observers ‘disgusted’ at the Etihad, and while Conte was left to bemoan Messi’s late leveller at Stamford Bridge, Hazard took some consolation from the fact that “at least we won’t be able to think defensively in the second leg”.

Conte has said he will speak to his players before formulating his plan to beat Barca and if Hazard’s view is heeded, then it will be Alvaro Morata or Olivier Giroud who will spend most of the night with their back to the Barca goal.

That being the case, Hazard has no excuses left to offer. His reluctance to do the job asked of him by his coach will only be tolerated if he produces the kind of performance we have rarely seen in knock-out phases from the Belgian, who has contributed only two goals and a single assist in 10 matches beyond the group stages.

Manager to watch – Jose Mourinho
Jose is in his element right now. Since the wholly satisfying draw at Sevilla, he has beaten Jurgen Klopp’s Liverpool and Conte’s Chelsea, either side of watching his side complete a comeback from 2-0 at Palace in injury time. Add into the mix an opportunity to get stuck into Frank De Boer, and it all makes for a happy manager.

Of course, it could come crashing down around him by Tuesday night. After shutting out Sevilla in their first leg, the presumption is that United will finish the job at Old Trafford. But Mourinho is well aware that this, like Brighton on Saturday, is a “die or live” encounter.

Sevilla know it too and the Spaniards make for a dangerous opponent. Sitting in fifth place in La Liga, “this is a beautiful opportunity to get up and give meaning to our season”, according to striker Luis Muriel. Club president Joel Castro was equally giddy: “We are really enthusiastic about the possibility of making history,” he said as they attempt to reach the last eight for the first time in 60 years.

So Mourinho has to mastermind United’s fourth consecutive win just to “smell the semi-finals”. The United boss would likely be happy to field the same side that beat Liverpool on Saturday, which appeared far more balanced than his selections of late. Of course, that XI didn’t feature Paul Pogba, though given his recent form and that of the team in his absence, Mourinho probably won’t lose much sleep about his health. If Pogba does declare himself fit, should the manager change a winning team and formation?

One-on-one battle to watch – Lionel Messi v N’Golo Kante
Messi had netted 535 Barcelona goals prior to rocking up at Stamford Bridge three weeks ago, but not one of those had come against Chelsea. Conte’s side were ‘almost perfect’ in attempting to shut out the little genius again for a ninth time until one slip gave him his chance to break his Blues hoodoo.

With that particular monkey off his back, Messi will be relishing this visit of an opponent he has not beaten in the last eight times he has faced them. It’s a scary prospect that the Argentina star may never have been in better form ahead of a meeting with Chelsea.

The 30-year-old is the La Liga player of the season so far, leading their goalscoring and assists charts, having been directly involced in exactly half of Barca’s 72 goals this term. He is also well rested and rejuvenated by the birth of his third child, for which Barca gave him a pass from the weekend’s win at Malaga.

So, because of his form and the way he drops deep, the burden of stopping Messi won’t be thrust upon one player but the entire Chelsea rearguard. Though perhaps the most crucial component of their defence isn’t actually a defender.

Andreas Christensen was in Messi’s face the most at Stamford Bridge but N’Golo Kante is the man with the job of patrolling the area the Barca star likes to drop in to and receive the ball. Between the two of them, they came so close to keeping Messi at bay until Christensen’s late error.

Prior to that, they had allowed Messi only a single pass into the Chelsea box and only six touches within the 18-yard area, with Kante spending his night goalside of the attacker, forcing most of his distribution to the left flank, where Luis Suarez is less of a threat then in the central area. Kante’s job is two-fold: stop Messi receiving the ball, but if he does, then deny him the space to hurt Chelsea with it.

‘Almost perfect’ won’t do at the Nou Camp. Kante and Christensen will likely need to be flawless.

Cardiff are on a six-game winning streak and Neil Warnock has Wolves in his sights after cutting the gap to the leaders to three points at the weekend. Brentford’s play-off hopes look to be over for this season, but they caused Cardiff problems in their previous meeting in October. The Bees had 25 shots without scoring, with one of them being this open goal…

European game to watch – Juventus v Atalanta
BT Sport offers a tasty warm-up for Barca v Chelsea with Juventus hosting Atalanta at 5pm on Wednesday. This is Juve’s game in hand over Napoli, with the champions having the opportunity to move four points clear, having trailed by one prior to the weekend.

It’s been a tidy week for Juventus, having dispatched Spurs last Wednesday too. It was after that triumph that Wojciech Szczesny backed up Georgio Chiellini’s assertion that mental toughness told in the end. “They’ve won six championships in a row and you see that makes a difference in the difficult situations. Where others crumble we manage to get out on top,” said the back-up keeper.

It happened at Wembley and while it would be wrong to suggest Napoli are crumbling, this is a fantastic opportunity for Juve’s seasoned campaigners to reassert their authority in Serie A.