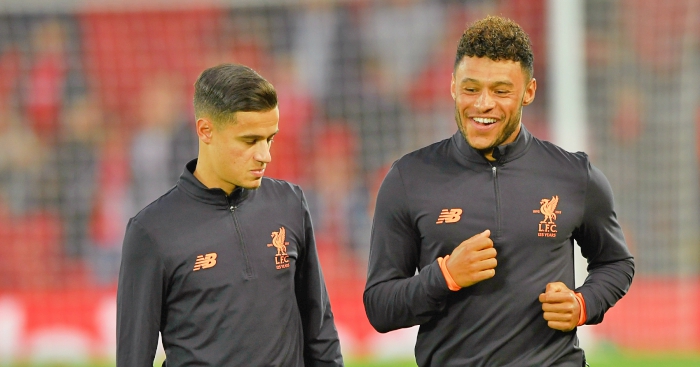 Game to watch – Manchester City v Napoli
“For me, and it’s just my opinion, they are one of the three best teams right now in Europe playing football.”

Pep Guardiola opted against naming the other two sides who can take the remaining places on the European football podium alongside Napoli, but it would have been more foolish than modest not to include Manchester City. The Spaniard, discussing his side’s Champions League group stage draw in August, did not even attempt to disguise his glee at the prospect of creating wonderful football fusion with the Serie A side.

“I’m not talking about winning – I like to watch the teams who want to play,” Guardiola would add, circling the dates of October 17 and November 1 in his calendar. Manchester and Naples will be treated to a veritable feast over the next fortnight. Think Kevin de Bruyne, Gabriel Jesus, Raheem Sterling, Leroy Sane and David Silva. Think Dries Mertens, Jose Callejon, Lorenzo Insigne and Marek Hamsik.

On Tuesday, the Etihad Stadium will host two of the continent’s most in-form sides. Across Europe’s top ten leagues, they rank first and third for goals scored, joint-fourth for shots per game, first and seventh for possession, third and second for pass completion, third and second for total passes, and first and first in their respective leagues. City have won their last nine games; Napoli have won their last six.

It is Miss World dating GQ’s sexiest man. It is Boyz II Men, Marvin Gaye and Whitney Houston sharing the stage. It is a three-course meal comprised only of desserts. It will be unashamedly, unabashedly, unblinkingly beautiful. There are 12 scorelines more likely than 0-0 according to the latest betting odds, including 4-2, 4-1 and 3-2 home wins. So sorry for cursing it.

Player to watch – Alvaro Morata
How quickly perspectives shift. Michy Batshuayi was crowned the king of Chelsea towards the end of September, but enters the third week of October having been unceremoniously dethroned. The Belgian has played 74 minutes in the two games since scoring the winner against Atletico Madrid, yet that has been more than enough to lower his stock considerably.

If Antonio Conte’s decision to bring on Willian for the injured Alvaro Morata against Manchester City was damning on Batshuayi, he was provided with the opportunity to prove the critics wrong against Crystal Palace. What followed was an insipid performance in defeat, in which he had no shots and completed just nine of his attempted 13 passes.

There was more than a hint of desperation in Conte’s voice at the weekend when previewing Chelsea’s game at home to Roma. “I hope to have Morata back for this game,” he pleaded to any higher power willing to offer an ear. The mere thought of Batshuayi leading the line against one of his home country’s best sides is enough to have the manager waking up in cold sweats.

The initial prognosis of Morata’s hamstring injury was that he would be sidelined for six weeks, but the sight of the Spaniard partaking in training on Sunday was enough to alleviate any fears. Chelsea accomplished the hardest part of their Champions League task with victory away at Atletico, but with Batshuayi still failing to earn his manager’s full trust, the club’s record signing may have to return sooner than expected.

Something will have to give in Slovenia on Tuesday; Liverpool’s European prospects depend on it. Successive draws with Sevilla and Spartak Moscow can only be justified if the group’s weakest side are dispatched home and away with consummate ease.

It will not be straightforward. Maribor have lost just one of their last 14 home games in Europe over the last four seasons, having hosted Chelsea, Sporting Lisbon and Celtic in that time. They are second in the Slovenian league, unbeaten after 12 games, and only kept off the summit by a Olimpija Ljubljana side managed by Igor Biscan.

But Liverpool have no excuses. The 0-0 draw against Manchester United was a step in the right direction for the defence, but keeping a clean sheet against Jose Mourinho’s neutered side was no real cause for celebration. The supposedly all-conquering attack Klopp has constructed still misfired at Anfield, and the Reds have now won just once and scored seven goals in eight games since the beginning of September. They are on the last of their nine lives; failure is not an option.

Manager to watch – Jose Mourinho
Fresh from his Merseyside ‘masterclass’, Jose Mourinho must rifle through the pages of his revolutionary book of tactics in an effort to remember how to advance past the half-way line ahead of a visit to his homeland on Wednesday.

To most, this is the leaders of Group A, a side with two wins, seven goals scored and one goal conceded in two games, meeting a club whose record is the diametric opposite. Benfica opened their Champions League campaign with a 2-1 home defeat to CSKA Moscow, before suffering a five-goal thrashing at the hands of Basel in September.

But Mourinho, as we know, is not like most. “The defeat suffered in Switzerland didn’t change my opinion that Benfica are our main opponent in this group stage of the Champions League,” he said earlier this month. “Benfica’s bad start doesn’t change the approach to the double-match that is at the door. They are better than CSKA and Basel.”

In which case, the 54-year-old can expect to exact a degree of revenge on one of his old sides. Mourinho has storied histories with each of his former flames, but his relationship with Benfica is easy to overlook.

The Portuguese cut his managerial teeth with the Eagles in 2000, but lasted only nine games before leaving. The then-37-year-old had followed a resounding 3-0 victory over Sporting Lisbon by demanding a new contract, so as to strengthen his position amid rumours of the club’s new president wanting to replace him as manager. Said president refused, Mourinho walked. But he is not one to hold 17-year grudges. Not at all.

One-on-one battle to watch – Luka Modric v Harry Winks
If Harry Winks was “in awe” of Cristiano Ronaldo the last time the pair were within a 10-yard radius, one can only hope the Tottenham midfielder is able to ignore the butterflies in his stomach when they meet again. Winks was a 15-year-old flag-bearer when these two sides last faced each other in April 2011, but will be on a level playing field with the superstars at the Bernabeu on Tuesday.

With the final game of Dele Alli’s suspension coinciding with the ongoing injuries of Mousa Dembele and Victor Wanyama, an opportunity is provided for Winks on the global stage. The 21-year-old only became an England international one week ago, but this is his toughest assignment yet.

It will be Winks’ 17th senior club start, and easily his most difficult opponent yet. Gillingham, West Ham, CSKA Moscow, Gent, Aston Villa, Wycombe, Fulham, Millwall, Burnley (twice), Barnsley, APOEL Nicosia, Huddersfield and Bournemouth are useful barometers of talent, and a Liverpool EFL Cup midfield and a group stage meeting with Monaco were undeniably steps up in difficulty, but this is an altogether different beast.

Winks has generated comparisons in some quarters with Luka Modric; he is Tottenham’s belated answer to the question the Croatian’s departure first posed in 2012. No-one is expecting the apprentice to become the master so soon, but a strong performance in Spain would only further hopes that Winks is the real deal.

Winks is ready for England…but are Tottenham ready for him? And is he ready for Real?

Football League game to watch – Exeter v Luton
“I just enjoy that it’s a proper football match,” said Stevenage manager Darren Sarll on Friday. “I enjoy the fact that Luton play a certain way and we play a certain way – you know you’re going to get a decent spectacle out of it.”

By Saturday, the 34-year-old surmised that his side had “disgraced ourselves”, “disgraced our football club” and “disgraced our town”. Luton did not just run out 7-1 winners at the weekend; they sprinted at full speed while Stevenage suffered from constant false starts.

Exeter will provide a much sterner test on Tuesday. Led by Paul Tisdale in his 12th season in charge, the Grecians are second in League Two, level on points with leaders Notts County, and two ahead of third-placed, free-scoring Luton. This one might actually be a proper football match.

European game to watch – Barcelona v Olympiakos
It is the one game this midweek that will feature Lionel Messi. If that doesn’t persuade you then fine.