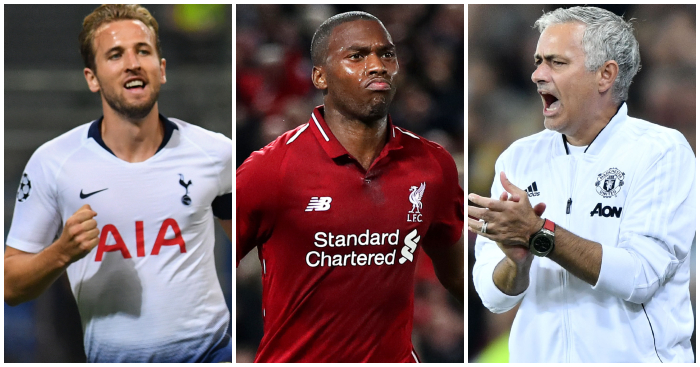 Game to watch – Tottenham v Barcelona
Spurs’ crisis seems like something of a distant memory. Three defeats have since given way to three victories, Harry Kane is scoring again and Mauricio Pochettino’s men are back in the top four. Normal service appears to have been resumed.

Which is handy because on Wednesday, Lionel Messi brings his Barcelona mates to Wembley – the scene of their 1992 European Cup triumph – and Spurs need to send them packing. Another Barca victory could potentially leave Spurs chasing a six-point deficit a third of their way into their Group B campaign.

The biggest question around Spurs during their run of defeats centred on their mental fragility. Late losses to Inter and Watford either side of being shown up by Liverpool had us all wondering whether Pochettino’s men had the stones or the energy to fight on either domestic or European fronts, let alone both.

Pochettino was encouraged by what he saw in the weekend win at Huddersfield, which was far from their prettiest victory. He was “most pleased” with Spurs’ aggression at the John Smith’s Stadium, where they won despite Town having more of the ball. “It was a game where the ball was more in the air than on the grass,” said Pochettino but the focus and desire on display bodes well for Barca.

Ernesto Valverde’s side come to Wembley in less than vintage form. Since they dispatched PSV Eindhoven back to Holland with a 4-0 thumping in their Champions League opener, the champions have failed to win in La Liga, with a couple of draws sandwiching a humiliating 2-1 defeat at bottom sides Leganes.

If there are more deep-rooted problems, this could be the perfect time to face Barca. Alternatively, the bear might’ve had enough of being poked and the next party to cross its path might find themselves being mauled. Either way, it’ll be good fun to watch.

Manager to watch – Jose Mourinho
As Tottenham’s crisis dissipates, Manchester United’s is raging once more after a three-game period of respite for Mourinho. Is it already too late for the United boss? Probably. And some suggest his players may wish to hammer the final nail in his coffin.

There’s little chance of that because not even this group of players are that stupid. If they are looking to get their manager sacked they very nearly gave the game away on Saturday, so poor was their performance at West Ham.

By playing Scott McTominay in the back five and axing Alexis Sanchez completely, you might suggest Mourinho is doing his demotivated players’ dirty work for them. If you heard his reasoning pre-match then you might think playing a young midfielder in the back three was a bold move. The outcome, though, paints a rather different picture.

Mourinho will insist the McTominay experiment was conducted for purely tactical purposes but it is hard to believe that the manager didn’t relish making a wider point. Whether he will take that approach against Valencia remains to be seen, but there are few of his stars who could argue with getting a dose of the Sanchez treatment.

Chief among them is Paul Pogba. Mourinho would be well within his rights to sit Pogba’s preening backside on the bench or in the stand on Tuesday night but we are long past the stage where the World Cup winner would channel his frustration in a positive manner. He may well be happy to take a seat and watch while United continue to flounder. The less he is involved, the better it reflects on Pogba. Which is a large part of the reason why Mourinho will probably pick him.

Mourinho can’t save his job on Tuesday night. But he could take another step towards losing it. Let’s see which outcome his players prefer.

Player to watch – Daniel Sturridge
“Thank God he is here,” said Jurgen Klopp of the Liverpool striker after his late equaliser at Chelsea, his fourth goal of the season. It’s a rather more positive reception from the manager who dispatched Sturridge off to West Brom in January on the presumption that he would not have to bother with the delicate forward again.

Now, Sturridge has not only demonstrated that he can be the Plan B that Klopp previously lacked, he is also working his way into the manager’s masterplan. It seems that spell at The Hawthorns provided Sturridge with enough perspective to realise what he’s got at Anfield and he returned in the summer determined to prove his worth.

“The timing is perfect,” said Klopp with Mo Salah off-colour and Roberto Firmino unable to start the Champions League opener a fortnight ago. “We need him desperately and he is fit. He is so fit – the fittest Daniel I have known. So, all good.”

Firmino is fit again and Salah would probably prefer to play his way back into form but with Sturridge firing and Xherdan Shaqiri available, Klopp can afford to ease the workload of his front three, especially with Manchester City coming up on Sunday. The trip to Napoli offers Sturridge the perfect opportunity to further dispel any lingering doubts about the striker being able to “play with the highest intensity over 95 minutes”.

Sturridge managed 90 last week in the Carabao Cup against Chelsea. Another full shift and a goal or two will strengthen even further the faith Klopp – and everyone else – had lost.

Team to watch – Manchester City
Things are going rather swimmingly for City at present. Back on the top of the Premier League; Sergio Aguero is on fire; Leroy Sane is responding to some tough love; and Kevin De Bruyne is closing in on a return way ahead of schedule. The only wrong turn in the short term is their Champions League aberration.

By their own lofty standards, City were dire in their Group F opener. At home to Lyon, they looked uncharacteristically laboured and predictable, certainly until Sane came on in the second half. But even then, the expected barrage after halving their half-time deficit never materialised.

A kind draw means the defeat is not likely to damage City too greatly. Put into context later in the season, it may be looked upon as a positive – the jolt they required.

Pep Guardiola will be back on the bench after squirming through the Lyon defeat from high in the stands, and he will be more familiar with Hoffenheim than most within City’s party. As Bayern boss, he faced the Bundesliga side six times and never lost.

For Hoffenheim, City’s visit represents the biggest match in their history. Not that they are content with just competing in the Champions League.

“Looking at the group with City, Shakhtar Donetsk and Lyon, there is an opportunity to finish second,” the club’s head of international relations Lutz Pfannenstiel told the BBC. “We have watched City a lot and worked on a perfect match plan to actually annoy Guardiola and try to hurt them.”

One-v-one battle to watch – Harry Kane v Gerard Pique
The Tottenham striker looked fit to drop before notching against Brighton last week. Another two at Huddersfield on Saturday suggests the need for a breather might not be as dire as it was feared and the sight of a creaking Barcelona defence on the horizon should do wonders for Kane’s energy levels.

Barca’s Champions League victory over PSG represents their only clean sheet in six attempts in September. “We are aware that we have to be stronger in defence and not concede goals in all matches,” said Messi after the weekend’s 1-1 draw with Athletic Bilbao at the Nou Camp, and their already creaking rearguard will require some changes at Wembley with Sergi Roberto crocked and Samuel Umtiti suspended.

It will be something of an unfamiliar backline led by Gerard Pique, who’s already under the spotlight as some question whether time is catching up with him. Defensively, this is Barca’s worst start in 13 years and their away record in Europe last season consisted of just one win thanks to an own goal at Sporting Lisbon.

If Kane has rediscovered his mojo, Wednesday would be a bloody good time to show it.

The Tractor Boys looked good for that first victory on Saturday when they carried a 2-0 lead into half-time at Birmingham. By full-time, they’d blown it. Brum scored twice through Lukas Jutkiewicz while Town finished with ten men.

It’s been a similar story at home, where Ipswich have been unable to turn a point into three. All of their five home games under Paul Hirst have ended in draws.

Boro had a most un-Pulis, attractive look about them last season. So the manager remedied that by selling Adama Traore and Patrick Bamford. As a result, the Teesiders have lacked creativity and their third-place standing has been based on a watertight defence which has been breached only four times – they have conceded ten fewer goals than leaders West Brom while scoring fewer than half the goals.

You’re not buying this, are you? Just watch United.