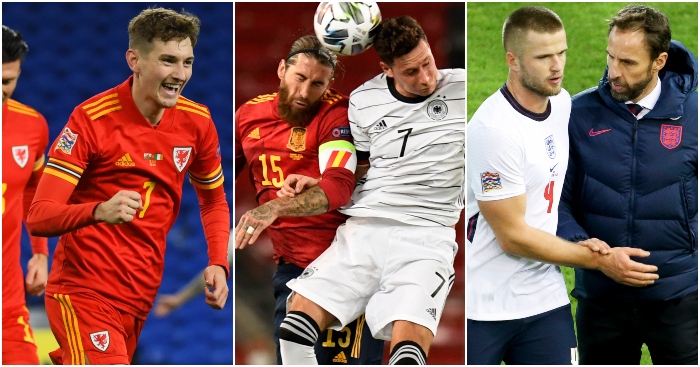 The Nations League may be dead to England, but for Spain and Germany, sh*t just got real.

The two European heavyweights meet on Tuesday in Seville for the Group A4 decider. As long as Germany avoid defeat, Joachim Low’s men will move on to next year’s finals to join France, who sealed their progress by beating Portugal on Saturday night.

It was on Saturday night when Spain handed Germany the initiative. The Germans saw off Ukraine 3-1 with Timo Werner bagging a brace. Sergio Ramos could have done the same for Spain on the night he became the most-capped European player but against Switzerland in his 177th appearance, the defender saw Yann Sommer save a pair of his penalties, ending a run of 25 consecutive successes from the spot. Even Ademola Lookman allowed himself a snigger at the second one…

It was a night to forget for Sergio Ramos 😬pic.twitter.com/x0kqOeoTxK

Spain had 71% of the ball and 20 shots on Sommer’s goal but it took until the 89th minute to breach the Swiss defence, with Gerard Moreno’s finish denying the hosts their first win in a year.

Scoring has been a problem of late for Spain, who haven’t notched more than a single goal in any of their last five matches. Their equaliser in the 1-1 draw in Stuttgart when these nations last met came even later than Moreno’s strike at the weekend, with Jose Gaya denying the Germans in the 96th minute.

Having also conceded first in six of their last nine games, Luis Enrique’s men simply need to find a way to win – no easy feat against a Germany side unbeaten in their last 12.

As well as a Nations League semi-finals place being on the line, this is an opportunity to decipher where each of these powerhouses are in their current states of recovery. Enrique could point to failure as a consequence of necessary experimentation while Low perhaps needs something tangible like qualification to demonstrate that Die Mannschaft are heading in the right direction.

Oliver Bierhoff, Germany’s general manager, last week attempted to get fans back onside: “We are no longer Germany’s darling… It hurts me to see how out young players are treated,” he said. “A dark cloud is gathering over the national team. To me the issue isn’t the criticism itself but the way it is being presented.”

Things are likely to get a lot bleaker for Bierhoff and Low if they blow their advantage in Spain.

Slovakia came out as winners on Sunday in the meeting of two sides possibly still hungover from their Euro 2020 qualification heroics last week. But Scotland have a second chance on Wednesday to take another step forward by winning their Nations League group.

Steve Clarke takes his side to Israel looking for a result that will seal promotion to League A. The Scots currently sit top of their group by one point, though even if they lose in Israel and Czech Republic draw with Slovakia, Clarke’s men will secure their second success in six days by virtue of a better head-to-head record.

Understandably, Clarke refreshed his side by making eight changes in Trnava on Sunday and though it ended in their first defeat in 10 matches, a run stretching back to last October, there were still positive signs. The manager may feel comforted by the depth of his squad though they still lacked a cutting edge in Lyndon Dykes’ absence which Clarke will hope can be rediscovered in Netanya.

Of course, this international break will always be remembered for last Thursday’s heroics in Serbia. But with a European Championships place ‘parked’, Clarke recognises the significance of moving up to the Nations League top tier for the sake of their World Cup qualification prospects and Scotland’s longer-term development.

“This is an exciting time for me,” said the Wales playmaker after scoring the winner against Republic of Ireland. And there can’t be many in the British game due a break before Brooks.

The 23-year-old was not all that long ago being linked with Manchester United among others but he is currently taking tentative steps towards the recovery of his fitness and reputation having spent much of the last 18 months on the sidelines.

Brooks missed the entirety of last season pre-lockdown and though he returned from a couple of ankle surgeries after the restart, the playmaker struggled in a sinking Bournemouth side. He has missed a month of the current campaign due to fitness problems but in the Cherries’ last game before the international break, Brooks managed his first 90 minutes in a league game since April 2019.

Back then, Brooks was Wales’ reigning Player of the Year but after a torrid time, 2021 could be equally as fruitful for the former Manchester City academy player. With Wales heading to the European Championships and Bournemouth engaged in a fight at the right of a table, Brooks has a wonderful opportunity to make up for lost time. Providing he can stay fit.

The recent signs are very encouraging. He followed his 90 minutes for Bournemouth with another 88 and the winning goal against Republic of Ireland, which leaves Wales needing only a draw at home to Finland on Wednesday to win their group and secure promotion to the Nations League top tier.

Delighted for David Brooks who didn't play a senior game for over a year because of injury and the pandemic. Real signs for Wales yesterday that he is getting back to his best. pic.twitter.com/58d4Gw0v0X

Anyone who watched England’s woefully dull victory in Iceland at the start of the Nations League campaign may be horrified at the prospect of watching the two sides meet again. Only this time with even less at stake with neither side able to qualify for the semi-finals.

But for Southgate, this matters. His may be a long-term plan, one based around making England difficult to beat and harder to stop, but while he puts the stepping stones in place, he is shedding supporters while the Three Lions struggle to excite as they have before.

The England boss cannot be blamed for taking a pragmatic approach amid these unprecedented times. With more games to pack in and less time to properly prepare, it makes sense that Southgate opts for a more cautious approach. And we know England CAN score goals since they averaged 3.8 per game last year. But whether they can keep them out is far more of a concern, especially given the current form of Southgate’s preferred defenders and goalkeeper.

Even against Belgium, England created. Thanks largely to Jack Grealish, they attempted double the number of shots their hosts mustered and were beaten by a deflection and a set-piece. But defeat resulted in a failure to match their 2019 Nations League showing, therefore representing a backwards step to many, regardless of the context.

Iceland arrive pointless and deflated after their Euro 2020 heartbreak last week and, in theory, there for the taking. So Southgate could really do with ending a Nations League campaign in which his side have failed to score from open play in four of their five matches this autumn with a resounding win and an exciting performance. How he tempers that with the pragmatism he has been practising is for him to decide and the rest of us to judge – mercilessly in the absence of a win.

If international football isn’t your thing, you’re sh*t out of luck this week.

There are three EFL matches, none of which are being broadcast by Sky Sports and when you see the fixture list, it’s a fair call. So your only alternative to Nations League or Under-21 European Championship qualifying is the WSL Continental Tyres League Cup.

On Tuesday and Wednesday, there are derbies galore. On Wednesday, you have Arsenal against Tottenham and Everton versus Liverpool, though the only way you can watch the Merseyside derby is through an LFCTV subscription.

Similarly on Thursday, MUTV is offering Manchester United against Manchester City, a swift second instalment to the weekend’s WSL meeting when United came from 2-0 down to secure a a point which keeps them top of the table.

If you can’t access either derby, maybe just play this on a loop for a couple of hours…

This wasn't a shabby first touch from @JackGrealish last night.

What are the best first touches you've seen? pic.twitter.com/MeSkAx9NUJ