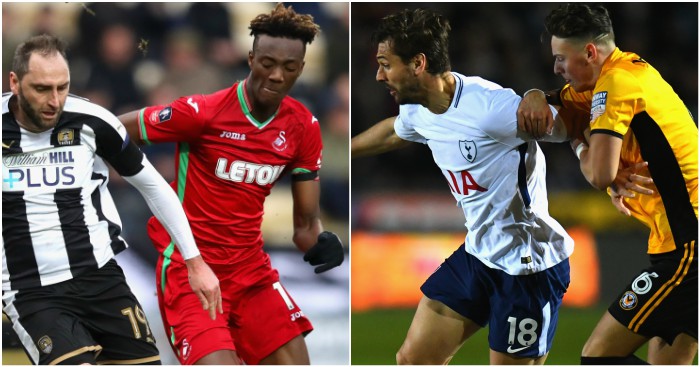 Game to watch – Swansea v Notts County
Notts County are relishing this FA Cup fourth-round replay more than their hosts but both teams go into the Liberty Stadium clash full of confidence.

For Kevin Nolan’s side, that comes from spending four months in the automatic promotion places at the top of a League Two table which sees second place and eighth separated by only five points. Luton Town are eight points clear at the summit, but County fancy their chances of joining them in League One next season.

Their success is based on an experienced squad, Nolan having played with a number of the players he now manages. The forward line that faced Swansea in the first tie at aMeadow Line – Shola Ameobi and Jon Stead – have 344 Premier League appearances between them. Ameobi contributes 299 of those, but Stead notched County’s equaliser, keeping up his record of having netted in every round so far. The former Blackburn and Huddersfield striker had notched six goals in six games prior to a blank in the 4-1 win over Crewe at the weekend.

After showing Swansea too much respect in the first half a week and a half ago, Nolan was delighted that County “rattled them early doors in the second half”. You can expect the Swans to face similar treatment from the off on Tuesday.

But this is a Swansea team now buoyant after losing only one of their last nine under Carlos Carvalhal. They were bottom of the Premier League when they travelled to Meadow Lane last week. Now they sit above the drop zone altogether.

Carvalhal hasn’t moaned about much since taking over and he didn’t bemoan the complication of a replay. The priority, though, is obvious: “If we don’t get through, then it is not the end of the world because our main competition is the Premier League – this is very clear.”

He will make changes but the Swans boss also realises the importance of maintaining their momentum ahead of a run of four Premier League matches against bottom-half opposition.

Player to watch – Tammy Abraham
While County’s forward line can only see their Premier League careers way behind them in the rear view mirror, the striker leading Swansea’s line is very much at the beginning of his journey.

Already, though, Tammy Abraham needs a jump start. The England Under-21 centre-forward hasn’t scored a goal since mid-October. He has missed a chunk of the time since with injury, but the first tie at Notts County highlighted that Abraham still has much to learn.

The 20-year-old was shackled by veteran journeyman Richard Duffy, who will be keen to impress once more against his boyhood club. Against Duffy, Abraham was unable to free himself up as an option for any Swans looking to pass forward, and on the occasions he received the ball, he was wasteful with it.

“He must learn and I have spoken about the work in transitions and he must be more strong,” Carvalhal said of the striker he is almost forced into playing due to a season-ending injury to Wilfried Bony, the need to give Jordan Ayew a breather and Andre Ayew’s ineligibility.

Rio Ferdinand was advocating for Abraham to be recalled by Chelsea to ease their striker shortage prior to Olivier Giroud moving to Stamfoird Bridge, but Abraham has done little in recent months to suggest that he can make the step up to Antonio Conte’s first team. With the Ayew brothers also wanting to start up front for Carvalhal, Abraham needs a much-improved showing against League Two County.

Manager to watch – Mauricio Pochettino
The Tottenham boss attributed his side’s struggle for a draw against League Two strugglers Newport to a deficit in “motivation, desire and fight”.

“In all these aspects, they beat us,” said Pochettino. “We missed a massive opportunity today to show that we really want to win some trophies.” Maybe, though, the Spurs players took their lead from the manager.

The need for Tottenham to win a trophy to supplement their obvious progression under Pochettino has been a talking point for a long time. But, in August, the Argentinian suggested that beggars can indeed be choosers.

“We need a big trophy,” he said at the start of the season. “It would mean nothing for me to win the League Cup or the FA Cup even though they are important.”

Of course, the Premier League and Champions League are Tottenham’s priorities. But given their rising status and the praise that is so often lavished upon them for their style of play, they must also prove that they can fight on multiple fronts.

The Premier League title is gone and they are in a battle for the top four. Europe is a fascinating prospect for Pochettino’s men but to round off their tenure at Wembley with an FA Cup triumph in May would represent a forward step for Spurs and it is a more realistic target.

His XI against Newport will no doubt feature numerous changes to the team that denied Liverpool and those are easy to justify. But, whoever he selects, their performance will again mirror the manager’s attitude to the task.

Team to watch – Huddersfield
The prize on offer for the Terriers in their cup replay at Birmingham is the opportunity to have another crack at kicking Alexis Sanchez and co off the park, with Saturday’s opponents Manchester United awaiting the victors at St Andrew’s on Tuesday.

Not that David Wagner will be all that fussed if he doesn’t have to face Jose Mourinho again this season. The Town boss is too busy fretting over whether they’ll meet next season, with Huddersfield now occupying a place in the bottom three after losing all five Premier League games in 2018.

The draw with Birmingham at the John Smith’s Stadium is the only game this year they haven’t lost, but it would have felt like a defeat to Wagner. “Too many mistakes in the offence and too many mistakes in the defence,” said the German, which goes some way to explaining their tumble down the Premier League table.

Wagner will make changes again but Town do not have the strength in depth to be able to rotate freely and easily. Even if they were to triumph over a Blues side who have made the opposite journey away from the relegation zone in the Championship on the back of two victories and four unbeaten, the Huddersfield manager may look at February 18 as ideal for a weekend off ahead of five Premier League six-pointers in six matches, rather than have to prepare again to face United.

One-on-one battle to watch – Fernando Llorente v Ben White
Like Abraham, the FA Cup offers Spurs striker Llorente the opportunity to get some minutes and attempt to play his way into something resembling satisfactory form.

He certainly didn’t take the opportunity in the first tie in Wales. The former Spain striker was shackled by 20-year-old centre-half White, on loan from Brighton, managing not one shot on Newport’s goal before being hooked for Dele Alli when Pochettino realised Spurs needed geeing up.

Still, despite only making one Premier League start all season since moving from Swansea for £14million in the summer, Spurs were not prepared to let Llorente leave last week for anything other than a fat profit. Pochettino may not yet have written off the 32-year-old, even if many supporters have.

The surroundings of Wembley are likely to be more to Llorente’s taste than Rodney Parade and while the former Juventus striker was not the only one who appeared to lack the necessary motivation at Newport, few of his team-mates had as little credit in the bank with Pochettino.

Football League match to watch – Accrington v Swindon
The covers are on at the Wham Stadium to avoid a repeat of the postponement at the start of December that sees Swindon head to the north west this week.

Accrington can climb into second place in League Two with a win over Swindon, who can leapfrog Stanley into fourth with an away victory. John Coleman will be hoping for a more comfortable affair than Stanley have served up in their last two home matches, during which they have had to come from 2-0 down to win 3-2 against Port Vale and Stevenage.

Considering that, and the fact that Swindon’s last four matches have served up 16 goals, you might expect a thriller. Not that you can watch it on the box, mind. Sky Sports are showing the Checkatrade Trophy semi-final between Lincoln and Chelsea Under-21s instead. We can’t recommend that as worthy of your eye-time.

European match to watch – Paderborn v Bayern Munich
Tottenham v Newport isn’t the only David v Goliath story this week. In Germany, Paderborn will play the role of the plucky underdog against the Bayern behemoth in the DFB Pokal quarter-finals.

Jupp Heynckes won’t be underestimating third-tier Paderborn, with the Bayern coach having spent his Sunday watching the Liga 3 leaders ahead of the visit to the Benteler Arena. Paderborn boss Steffen Baumgart has told his players to “attack early and act courageously” as they look to avoid a repeat of Bayern’s last visit – a 6-0 win for the Bavarians three years ago.