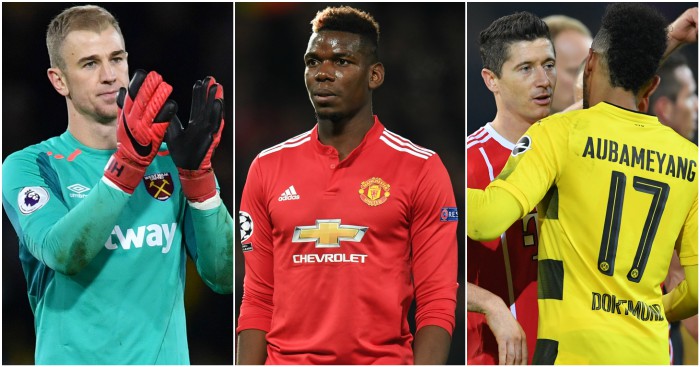 Game to watch – Leicester v Manchester City
In the form Man City are currently in, why wouldn’t you watch them? Okay, so Pep Guardiola will make changes to his XI for their second trip to the King Power this season, but the City boss has still named strong sides for their two previous Carabao Cup ties.

In both, City have been pushed harder than in most Premier League games, with Pep’s men dicing with defeat during the fourth-round penalty shoot-out win over their Championship equivalents, Wolves. Such is the way City’s season is going, even Claudio Bravo has demonstrated a golden touch, with the Chilean largely responsible for denying Wolves and keeping City’s Treble and Quadruple hopes intact.

Though the prospect of City going the season unbeaten has been widely discussed, few have pondered the prospect of them making a clean sweep. The way Guardiola’s men are playing, it’s difficult to see anyone stopping them.

So what chance have Leicester got? In the month since City won 2-0 at the King Power, Claude Puel has seen Huddersfield, West Ham, Southampton and Man Utd sit back in vain, while Swansea and Tottenham both had a go at City and were duly dumped back in their boxes. Back on November 18, the Foxes tried to start fast, as they did the previous season when they deservedly beat City 4-2, but this team is a vastly different animal to the inconsistent early-Pep City that were embarrassed by Claudio Ranieri’s champions.

With Guardiola likely to field a similar side to that which was almost beaten by Wolves, perhaps their blueprint is the wisest to follow. Nuno Espirito Santo’s side sat in, similarly to the Premier League sides that made City at least sweat, but Wolves were incisive on the break, with only their finishing and Bravo denying them a famous win.

Puel says Leicester will pick the “strongest players of the moment”, with consideration for the workload ahead. Shinji Okazaki was rested at the weekend, despite starring in the 4-1 win at Southampton last week, so he could be paired with Jamie Vardy as Puel looks to exploit the centre of City’s defence – the area of Pep’s side likely to be the most inexperienced.

Prior to the weekend, no one outside the top five had beaten Leicester this season. If they can regain that solidity and prove that the Palace defeat was a blip – especially given that they had won their previous four – then City may well face a proper test.

Player to watch – Paul Pogba
The Manchester United midfielder’s three-match ban is over in time for the trip to Bristol City…and how they’ve missed him. In their record signing’s absence, United were outclassed by Man City, matched by Bournemouth and made to cling on against a West Brom side with 36-year-old Gareth Barry pulling the strings.

Jose Mourinho has been keen to use Pogba’s absence as one of the primary reasons why his team have fallen so far behind City and, regardless of what Garth Crooks or Graeme Souness might say, the United boss is right. The Red Devils miss his creativity, athleticism, composure and, perhaps most of all, his swagger.

Quite simply, Pogba is the difference between United being efficient or enthralling. And having missed 15 of United’s 27 matches this term, he can’t afford to waste any time in making his presence felt in Mourinho’s midfield.

Team to watch – Bristol City
Regardless of Pogba’s return, the Robins are rocking at the moment. Eight wins in their last 10, including their recent four wins on the spin for the first time in over six years, have taken them to third place in the Championship table, making promotion a very realistic ambition, having already been crowned kings of Twitter.

Their rather unique goal alerts have been getting plenty of use of late, with Middlesbrough, Sheffield United, Hull and Nottingham Forest all vanquished in recent weeks. Much to Lee Johnson’s delight, the challenge of United in front of a full house at Ashton Gate has not distracted his players from their bread and butter in the eight games between the draw and Wednesday’s big night.

The difference in mood between this particular City and United is stark. Ahead of their first trip to Ashton Gate in 38 years, Mourinho’s EFL Cup holders appear still to be sulking over being put in their place by Pep Guardiola’s all-conquering Premier League leaders, while Johnson’s side are just two behind their highest pre-Christmas points tally ever in any division, with three points still to play for.

Mourinho will doubtless make changes, but he will not be fielding a reserve team. Anthony Martial, Marcus Rashford, Jesse Lingard, Ander Herrera and Chris Smalling are among seven players to have started both Carabao Cup games so far this term, with Pogba available again and Zlatan Ibrahimovic looking for a start. But they will come up against an organised side, who pose more of a technical challenge in attack, with Bobby Reid and Jamie Paterson buzzing off one another, while 6ft 6in Aden Flint, a United-supporting centre-half with six goals to his name so far this season, make the Robins an aerial threat on set-pieces.

Manager to watch – Eddie Howe
With Manchester City on the horizon following a narrow defeat at Manchester United and a tonking at the hands of Liverpool, the last thing Howe probably needs is a trip to Chelsea in the Carabao Cup.

Unlike some other clubs, there is an acceptance at Bournemouth that they are in the mire. Had it not been for Christian Benteke’s  powderpuff penalty in injury-time at Crystal Palace last week, then it would be just one solitary strike on the goal-difference tally keeping the Cherries out of the bottom three. Even with a one-point cushion on 17th-placed Newcastle, both Howe and skipper Simon Francis have publicly recognised the perilous nature of their position. Hardly a surprising declaration when you consider that Bournemouth have spent eight of their 18 matchdays entrenched in the drop zone.

So, with a pre-Christmas visit to the home of the all-conquering leaders to come on Saturday, followed by meetings with West Ham, Everton and Brighton also within 10 days of the Etihad excursion, hoes does Howe approach a trip to the reigning champions in the cup? A needless or a welcome distraction?

The Carabao Cup quarter-final represents the furthest point to which Howe’s side have progressed in any cup since they arrived in the Premier League. Prior to beating Middlesbrough in the last round – a tie played when Bournemouth occupied 19th place in the Premier League – Howe claimed that their League Cup commitments would not distract from their league priorities. “The games take on a different meaning then,” he said when discussing the prospect of reaching the last eight. So which match, if either, takes priority: Chelsea and the chance to reach a first cup semi-final; or the chasing they are likely to receive at Man City?

From a personal perspective, guiding Bournemouth to their first cup semi and perhaps beyond would be another feather in his cap. Howe  seems to have slipped off the radar of bigger clubs, with Daniel Storey suggesting he had become the flavour of last month and perhaps some exposure in the cup may refresh some people’s memory of the job he has done with Bournemouth. Of course, that is not his greatest motivation, but Howe would be naive not to go for a potentially history-making League Cup triumph this week, even if he has greater concerns to consider.

One-on-one battle to watch – Joe Hart v Theo Walcott
Two players who, at the start of the season, probably had the World Cup at the forefront of their minds. For both, there are now far more pressing concerns at club level.

This London derby at least offers Hart and Walcott the opportunity to stake their claims. Walcott hasn’t started a Premier League game for Arsenal and managed just 46 minutes off the bench. He hasn’t been seen in the league since October 1. But in the Europa League and Carabao Cup, he has at least offered five goals and four assists in seven starts. The 28-year-old now has the opportunity to state his case for more game time during the busy festive period for Arsenal, who also face Liverpool, Crystal Palace, West Brom and Chelsea in the coming fortnight.

Standing in his way on Tuesday night will be Hart, whose loan move to West Ham is working out even worse than his spell at Torino ended. The 30-year-old was barely clinging on to his England shirt even before he was dropped by David Moyes after he was forced to sit out the meeting with parent club Man City. Adrian, a Hammers fans’ favourite, came in and demonstrated once again that he is too good to be a No.2, conceding two goals at City before keeping three consecutive clean sheets as West Ham suddenly took on a more solid appearance in wins over Chelsea and Stoke and a stalemate with Arsenal.

Hart needs a flawless game at Arsenal simply to stand still. Adrian will be back in to face Newcastle on Saturday, with Hart left in the cold while Jack Butland and Jordan Pickford encroach further on his England spot. The next opportunity he is likely to get would be the return to boyhood club Shrewsbury in the FA Cup next month. Hart, who is stuck at West Ham for the season come what may, simply cannot afford any mistakes that require any amount of ‘fronting up’.

Football League game to watch
There isn’t one. So…

European game to watch – Bayern Munich v Borussia Dortmund
The DFB Cup Klassiker on Wednesday finds both sides on the up. Bayern have recently extended their lead at the top of the Bundesliga to 11 points following Jupp Heynckes’ return, but the Bavarians’ injury woes are also starting to ease. Thomas Muller netted his first goal in three months at the weekend to beat Stuttgart, and he is expected to start against Dortmund behind Robert Lewandowski, while Franck Ribery and Arjen Robben are also vying for returns.

Dortmund have waited a little longer to kickstart their season, but Peter Stoger appears to have lifted the mood among the DFB Cup holders if back-to-back wins over Mainz and Hoffenheim are any measure. The victory over Hoffenheim was especially sweet for Stoger as it came against Julian Nagelsmann, the young coach (he’s 30, FFS) who was widely rumoured to be lined up as the next Dortmund boss. Stoger has never beaten Bayern in six attempts as a head coach, but turning over winter champions on their own patch will do his future job prospects no harm either.