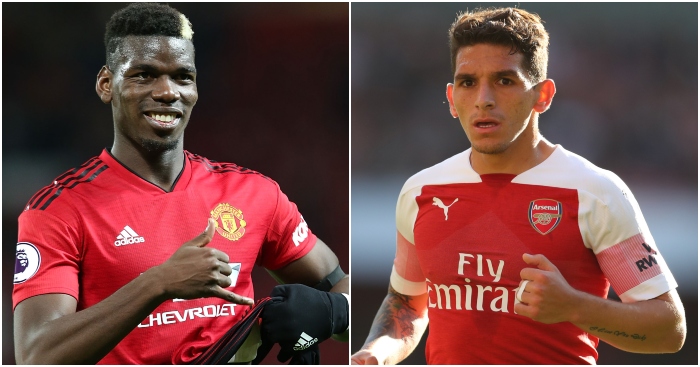 Game to watch – Manchester United v Arsenal
The first midweek match-day of the Premier League campaign has arrived and though its main event may no longer be the title-decider it once was, Arsenal’s trip to Old Trafford still gets the juices flowing. Unless, perhaps, you happen to play for Manchester United.

It is hard to know what might arouse some of Jose Mourinho’s side at present – except perhaps the manager’s removal from office. That doesn’t appear likely to happen any time soon so, in the meantime, the squad and Mourinho are stuck with each other. Judging from recent performances, it seems that the players have yet to decide to make the best of the situation.

Mourinho is hardly blameless for the mess at Old Trafford. Sometimes his behaviour and decisions have been so erratic that it’s worth asking if he is trying to get himself sacked, but his role in United’s problems attracts plenty of scrutiny. Until recently, his players have been able to hide behind the manager to take shelter from all the flak. But their contempt has become more obvious by the week, and it seems like many of them roll their sleeves up only when they are shamed into doing so.

In stark contrast to the Red Devils’ divisions and disillusionment, Arsenal are again a club united. If 18 games unbeaten didn’t achieve that prior to the weekend, then a resounding derby win which made a mockery of the supposed power shift in north London certainly has.

The 4-2 victory over Spurs felt like the game in which Unai Emery’s mark was officially stamped on this Arsenal team. Although they trailed at half-time – as they so often do – the Gunners started with an intensity that has sometimes been missing even during their unbeaten run. The sense of injustice from a half-time deficit they did not deserve, in terms of their performance or the circumstances that gave Spurs their lead, only increased their drive. Once Emery made his tweaks, there was only one winner.

Even when conceding, there were positives for Arsenal. After Eric Dier had taken a liberty after scoring Spurs’ equaliser, there was a reaction – a push-back that over recent years would probably have been missing. It demonstrated a passion and togetherness that so often the modern-day Gunners have lacked.

Old Trafford welcomes two teams on entirely contrasting trajectories. But, still, it wouldn’t be a huge surprise to see the sliding hosts paper over their cracks and burst Arsenal’s bubble. Then Mourinho’s men can return to their comfort zones for the 0-0 draw at home to Fulham this coming Saturday.

Player to watch – Mo Salah
Jurgen Klopp admitted last week that Salah was showing “not the same calmness, coolness” in front of goal this season and that airshot in the derby backed up the Liverpool manager’s observation. But Klopp reckons last season’s 39-goal striker is back to ‘100 per cent’ fitness after suffering from the absence of a rest during the summer and the trip to Turf Moor is likely to provide Salah’s eye for goal the opportunity to catch up with his legs.

Salah was largely ineffective during the derby on Sunday but he would have considered himself unlucky to be hooked while Roberto Firmino was stinking out Anfield up alongside him. It was only the second time in the last six Premier League matches that Salah has not found the net, but there is little debate over the fact the Egyptian is yet to find his stride.

So Wednesday is the perfect time to meet Burnley and their crumbling defence. The success of Sean Dyche’s side last season was built on a solid foundation, one that invited opponents to have a go at their goal, but not from positions where they could be hurt. This term, as Daniel Storey pointed out in Winners and Losers, it is open season on the Clarets’ goal.

Burnley conceded the second highest amount of shots in the Premier League but their back four, especially the two centre-backs, worked in tandem to block the line of sight to goal. When James Tarkowski and Ben Mee’s two-tier rearguard was pierced, Nick Pope was there to take care of business. As defensive strategies go, encouraging opponents to shoot is among the more risky ones, especially when the back five are being overrun.

Burnley have made nine more blocks than at the same stage of last season, but they have faced 60 additional shots compared to the opening 14 matches of 2017/18. Joe Hart has had to field 94 shots on his goal – an increase in workload of more than 50 per cent in comparison to the 60 efforts on Pope’s net.

So the last thing Dyche needs is Liverpool and their strikers turning up looking to get their eye in. If Salah really is back to to full fitness, then Wednesday seems an appropriate time to rediscover his form too.

Team to watch – Wolves
The talk through the opening weeks of the season was of Wolves being European contenders. Their form over the last six weeks, however, is that of relegation candidates. Only Burnley can match their recent wretchedness.

Nuno’s side have taken just one point from the last 18 available and that draw came in the hardest-looking fixture of the lot against Arsenal at the Emirates. Had they held on to piss on the Gunners’ chips, maybe that confidence would have had an influence in subsequent games against relegation candidates Huddersfield and Cardiff. Instead, Wolves lost both games to continue their slide into the bottom half.

Why have Wolves followed six without defeat with six without a win? Goalscoring appears to be at the root of the problem, specifically breaking down dogged defences. Against Cardiff, Huddersfield, Brighton and Watford, the Championship title winners have scored only once. Against Arsenal and Tottenham, they managed three.

Perhaps Nuno will be encouraged that Chelsea are the visitors to Molineux on Wednesday, and not Newcastle or Bournemouth, who they face in their next two matches. Aside from Burnley – who we know offer chances to seemingly anyone -, Wolves created the next highest number of big chances against Arsenal, Everton and Man Utd. According to Opta, they failed to muster a single ‘big chance’ against Huddersfield, Cardiff, Leicester and Watford.

The Wolves boss is adamant that there is no need to tear up his blueprint to help Wolves thrive, not just survive in the Premier League. But they are, at present, the joint-worst side in the division and showing relegation form against relegation candidates. It is too soon to panic, but a positive result against Chelsea would offer Nuno some much-needed relief.

Manager to watch – Kelvin Davis
If Southampton have their way, the caretaker boss will only have a midweek trip to Tottenham in the spotlight. Even if Saints have appointed a new manager before then, surely the new man will have the good sense to let Davis take the expected hit at Wembley.

Before Mark Hughes’ sacking, it was hard to see Saints doing anything against a seething Spurs. We might not see the full new manager bounce, but a new face leading the team – even if only temporarily – could alter the players’ mindset.

Davis admits that one day he ‘would love’ to manage Saints and while he might not be the next appointment, he still has one game to put his stamp on the side. But what can he try that has not already been tried by Hughes?

The Saints weren’t lacking spirit in Hughes’ final days in charge and the fact they are 18th after finishing 17th last season suggests they are not woefully under-performing. Hughes tinkered with formation and personnel, with his latest efforts to force change centred around three at the back and an injection of youth as Michael Obafemi and Yan Valery were chosen instead of the ‘safer’ picks of Wesley Hoedt and Charlie Austin.

As encouraging as the performance may have been against United, at least one different selection will be enforced upon Davis owing to the injury to Obafemi. It is up to the caretaker manager to find the balance between positive change and interfering just for the sake of it.

One-v-one battle to watch – Paul Pogba v Lucas Torreira
We’ve already highlighted the contrasting courses being taken by United and Arsenal ahead of their meeting on Wednesday. No two players embody their clubs at present like this pair.

Arsenal new boy Torreira was man of the match in their derby win at the weekend. It was the crowning performance of a hugely encouraging start to his Gunners career, which began with a month on the bench to allow the 22-year-old time to acclimatise to his new surroundings while recovering from the exertions of playing a key role for Uruguay at the World Cup. Whisper it quietly, but Arsenal might just have found the player they been missing for the last decade.

Dynamism, biting into tackles, passes plentiful and accurate, all crowned with a decisive goal – Torriera had the kind of game against Spurs that United fans have craved from Pogba. The France star’s supporters will insist they are different types of player, but it is hardly asking too much of an £89million record signing to perform the basic functions of a midfielder. Torreira combined them all on Sunday. Mourinho would be grateful for any in isolation right now.

Pogba gave away possession 25 times against Southampton on Saturday, which was apparently enough for Mourinho to let rip on his preening record purchase. That is only two occasions fewer than his miserable showing at Brighton at the end of August when Pogba admitted that his attitude was poor. Until we see evidence to the contrary, we remain convinced it still is.

If Mourinho decides he has little choice but to pick Pogba against Arsenal, one of two things will probably happen: Pogba might pull his finger out and raise his game; or Torreira will run all over him. Either way, it will be fun.

European game to watch – Montpellier v Lille
Thank Christ the Premier League is putting on a show in midweek because there is precious little other football of note being played anywhere in the Football League or on the continent.

You could watch PSG’s latest cakewalk, with Strasbourg the latest Ligue 1 lambs to the slaughter. But that kicks off at the same time as United v Arsenal. If you don’t fancy watching the Premier League’s PSG travel to Watford on Tuesday night, then your alternative is Montpellier v Lille.

Montpellier could really turn up the heat on PSG by closing the gap to just 11 points before the leaders travel to their eighth-placed opponents 24 hours later. Alternatively, Lille could climb into second by putting themselves within 13 points of PSG. Thomas Tuchel is sh*tting himself, apparently…