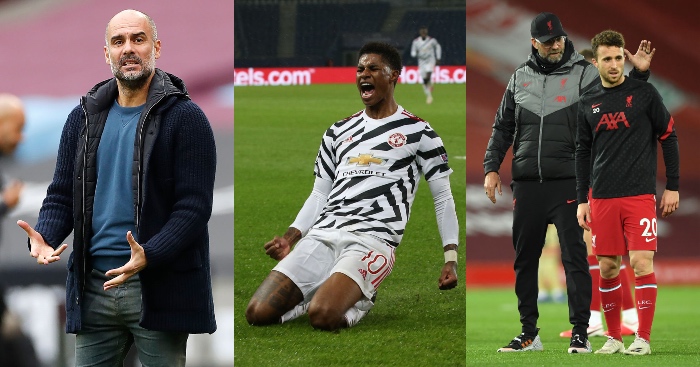 RB Leipzig currently sit undefeated atop the Bundesliga: it’s about as tough a start to a Champions League campaign as it gets.

Rather than new £18million striker Alexander Sorloth – who failed to make a name for himself at Crystal Palace but banged in 33 goals on loan at Trabzonspor last season – it seems to be Man City loanee Angelino that United need to be most wary of. He is currently making up for Timo Werner’s missing gluttony of goals: he’s scored four in six from left wing-back.

But any wandering United eyes will surely linger more on Dayot Upamecano who was said to be one of Ole Gunnar Solskjaer’s top summer targets. Defensive instability means centre-back reinforcement must surely be a priority in January or beyond and a new buyout clause of £38million seems more than reasonable for a player of his quality. If only United hadn’t backed out of a deal for him for the sake of £200,000 in 2015. Ouch.

A win for United and they’ve got a toe in the knockout round. From this group that would be no mean feat.

A solid if unimaginative display against Europa League champions Sevilla at Stamford Bridge, followed by another goalless draw against Manchester United on Saturday provides great grounds for optimism for Chelsea under Frank Lampard.

Edouard Mendy is doing the unthinkable: saving shots on target. He and Thiago Silva are making their teammates calm the f**k down. Blessed relief for Chelsea fans whose heartbeats have been in a near constant state of tachycardia for over a year.

They will need to score a goal or two to qualify though and the game against Krasnodar – who sit eighth in the Russian Premier League – should give them ample opportunity to do just that. Lampard hinted that Hakim Ziyech could start on Wednesday; his vision and delivery may be what the stuttering attack is missing.

Is anyone – Phil Foden aside – playing well for Manchester City right at the moment? Pep Guardiola cut a frustrated figure after the 1-1 draw with West Ham on Sunday and blamed poor finishing for a poor result. But this is City’s new normal: a ponderous midfield; a disorganised defence; a manager chopping and changing to find something that works rather than yet another system that does.

The victory over Porto in their opening Champions League game was less than convincing. Had it not been for Ilkay Gundogan’s wonderful free-kick, they could easily have gone on to lose. Like all of their games this season, and really for the last 18 months or so, there was an alarming lack of presence and confidence. The business-like way in which they would pile on pressure and wait for opposition teams to collapse under the weight of it is becoming a more and more distant memory; they’re a shadow of that once excellent team.

Guardiola has been praised, heralded, criticised and ridiculed for his changes, team selections and formations. When his team was oozing assuredness any accusations of tactical whimsy could be sold as misplaced genius, with the quality and conviction of his players often ultimately coming up trumps in any case.

But now, with the players unsure of themselves and their teammates, the reliability must come from Guardiola, who needs to put aside his own affectation to rework and modify, and simply find a solution that works and stick with it. He takes his side to Marseille on Tuesday.

“He is still adapting,” Klopp said of Diogo Jota, after he scored the winner against Sheffield United. “He’s 23 and the future is bright, let me say it like this. We will need his quality and I am really happy that he settled nicely so far.”

Two Premier League appearances for Liverpool at Anfield for Jota thus far – two goals. It’s too early to rebrand the Fab Three as the Fab Four despite Jota’s joy alongside Roberto Firmino, Mo Salah and Sadio Mane, but Jurgen Klopp’s willingness to draw up new blueprints to shoehorn him into the side against the Blades indicates the high regard in which he holds the Portuguese international.

Klopp may well revert to the tried and tested 4-3-3 against Midtjylland on Tuesday rather than the 4-2-3-1 he employed on Saturday, but either way, giving Jota another go makes sense. As Klopp says, he’s still adapting, and the Liverpool requirements mean that adaptation will be longer and more laborious than with almost any other team. With all due respect to the Danish side, they represent some pretty shiny sun in which to make hay.

Not sure anyone predicted Reading would be sitting five points clear at the top of the Championship after seven games. Veljko Paunovic took the reins in the summer and is yet to taste defeat.

Five years ago, the 43-year-old was leading the Serbia U20s as they beat Brazil to win the World Cup final. Now, after four seasons in charge of Chicago Fire, his impact at the Madejski Stadium is giving Reading genuine hope of a return to the Premier League.

They’ve conceded just one goal this season but the division’s strongest defence face its most potent attack on Tuesday. Blackburn have scored 16 goals in the Championship so far, with Adam Armstrong the league’s top scorer on seven.