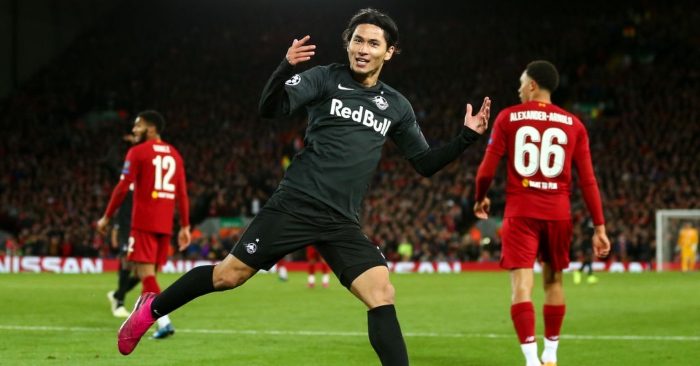 Game to watch – Red Bull Salzburg v Liverpool
Jurgen Klopp has far, far more credit in the bank than Roberto Di Matteo, who became the first manager in history to take a team from Champions League winners to group-stage failures in the same calendar year in 2012, so while Chelsea acted swiftly to sack the Italian, Klopp would be safe from harm. But it would be a tad embarrassing. This was not seen as a troublesome group and yet Liverpool have run into trouble, the run-away English champions-elect struggling against Italy’s seventh-best side.

Avoiding defeat against Red Bull Salzburg sounds like a relatively simple task, but this is a Liverpool team who contrived to throw away a three-goal lead against the same opposition at Anfield. And this is a Salzburg team which has lost only once at home in three years. This season alone, they have averaged over four goals per game at The Red Bull Arena. They will probably score and Liverpool must score too. Probably more than once.

The good news is that Liverpool are scoring goals for fun, which means that what this game might eventually lack in peril, it will make up for in entertainment. And it doesn’t seem to matter an awful lot who plays; since the beginning of November alone, 12 different players have scored for the club.

We expect a full-strength Liverpool – by no means ideal in this ridiculous December – which means returns for Trent Alexander-Arnold and Sadio Mane, who sat out Saturday’s cruise against Bournemouth. Klopp admits that they wanted a Salzburg “holiday” and have instead been left with a stressful work trip. But that is excellent news for the rest of us who relish our tea-times being made a whole lot more interesting. Fingers crossed for the 3-3.

Player to watch – Antonio Rudiger
“Hungry” was the word Chelsea boss Frank Lampard used to describe Antonio Rudiger, whose stock has multiplied in his absence as Chelsea’s young defenders have floundered. They were soft on Saturday against Everton and it’s not the first time; they have only kept out Crystal Palace in their last ten games. Rudiger has been desperately missed and it’s no coincidence that Chelsea’s most imperious 45 minutes came in the only 45 minutes Rudiger has played this season, during which Chelsea carved a 3-0 lead over Wolves.

Chelsea’s task on Tuesday is simply to beat Lille. There are other permutations that could see Chelsea through with a draw but the safe option is to win the game, which they did not manage against either Valencia or Ajax at Stamford Bridge. And to win the game against Lille, they need to realistically stop the French side scoring more than once. The bad news for Chelsea is that Lille don’t need to score more than once to win the game, as three consecutive 1-0 wins testify. Which adds to the other bad news about Chelsea being unable to keep a clean sheet.

So over to you Tammy Abraham and Mason Mount for goals, but also Rudiger, who is being thrown into the deep end on Tuesday by a combination of injury to Fikayo Tomori and the ridiculousness of Andreas Christensen’s form. Lampard’s comment that he has missed “individuals” like the German suggests that much is expected at Stamford Bridge. Defending and pointing and shouting, mostly.

I know that Rudiger is a bit rash but he’s a warrior, very vocal, hates losing, commands players around him. Don’t forget he was playing with David Luiz in a back two last season. Even John Terry looked bad in a two with Luiz. For now, Rudiger remains our number one CB. End of.. pic.twitter.com/75M82ceZwF

Team to watch – Tottenham
It’s a dead rubber but this is still Spurs in Munich, looking not to be utterly embarrassed by a Bayern side that beat them 7-2 in north London. I was pretty damning of this Tottenham side after that game, writing that this was ‘the kind of result from which it feels impossible to recover’. Mauricio Pochettino limped on in the job for another seven games which featured only two victories over Red Star Belgrade – enough to take them to the edge of Champions League qualification but not enough to save the job of the Argentine.

His replacement has changed the mood, there is little doubt about that. Four wins from five and finally a clean sheet against a very poor Burnley side. Could that mood survive another Bayern battering, regardless of the lack of life in this particular strong, waterproof, elastic substance made from the juice of a tropical tree or produced chemically? Even this new, positive Jose Mourinho would struggle to spin an absolute spanking.

What we do know is that “the Walker-Peters, the Skipps, the Parrotts, the Sessegnons” (in reality, there is only one of each) might all be involved, which does suggest that Mourinho is already preparing to spin an absolute spanking. In reality, a narrow defeat will be enough to sustain Spurs optimism, though Bayern’s recent form (back-to-back 2-1 losses) suggests that there is a better result there for the taking if Mourinho allows Christian Eriksen, Danny Rose and Giovani Lo Celso to advertise their wares to potential buyers. A dead rubber but perhaps not a dead cert.

European game to watch – Inter Milan v Barcelona
“We need to play the game with great courage to try and go beyond the beautiful high obstacle that is in front of us,” said Inter coach Antonio Conte. And who doesn’t want to watch Romelu Lukaku and Lautaro Martínez try to mount a beautiful high obstacle? Inter face the minor task of beating Barcelona but they will be buoyed by the absence of Lionel Messi from the travelling squad. If Barca don’t care then that plays right into Inter’s hands because they absolutely do. It’s been a barely believable seven years since they reached the knock-out stages of the Champions League. To accomplish that by beating Barca – and while being top of Serie A – would make Conte an instant hero.

Championship game to watch – Preston v Fulham
We assume Leeds and West Brom will breeze past Hull and Wigan on their march back to the Premier League so we recommend that you watch Preston attempt to end a 400-minute wait for a Championship goal that might give them a chance to turn around a season which is falling apart around the ears of Alex Neil. “It is easy to point fingers, but four games ago everyone was talking about how great we were, so we just need to get our levels back and try and get something from the next game,” said the Scot after a fourth consecutive defeat. The rot has to stop here and it helps that Preston are at home on Tuesday, though it does not help that they face a Fulham side who are seething after defeat at home to Bristol City halted their own promotion march.