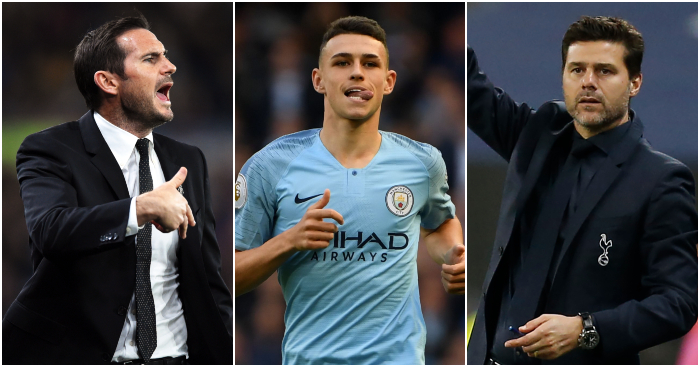 Game to watch – West Ham v Tottenham
Mauricio Pochettino might consider this his “worst feeling” at Tottenham, but it would serve him well to wind the clock back 12 months. It was towards the end of October 2017 that Jamie Redknapp was accusing Spurs of “arrogance and complacency”, while Dean Ashton branded the manager “pathetic”.

A 3-2 defeat to West Ham in the fourth round of the Carabao Cup, having led 2-0 after 55 minutes, had painted their season a particularly bleak shade of grey. They were doing well in the Champions League, but could not possibly have designs on winning the competition. They were third in the Premier League, having thrashed Liverpool 4-1 that same weekend, yet were already five points behind a rampant Manchester City. They were realistic contenders to win the two domestic trophies, and those prospects were halved long before Christmas decorations were dusted off.

Pochettino had spent the entire build-up to the game pointing out that Tottenham’s “objective” was to win either the Premier League or Champions League – “two real trophies”, as he so eloquently put it. “That can really change your life. And then the FA Cup, of course, I would like to win. I would like to win the Carabao Cup. But I think it will not change the life of Tottenham.”

That stance really ought to have softened by now. Tottenham are fifth in the Premier League table and stuttering badly in Europe, so the Carabao Cup takes on greater prominence than before. It should still be the fourth priority on every elite club’s list, but circumstances change. Its value should not be overlooked.

Tottenham have not won a trophy since 2008. Pochettino, as a manager, has never won one. Many of this young and hungry squad haven’t either, and there is only so long certain players will wait before leaving to realise their ambition elsewhere. Patience is a virtue that might well be in short supply in north London rather soon.

Wednesday therefore takes on greater importance than usual. If paying West Ham a second visit in the space of a fortnight was not enough of an incentive, the prospect of potential silverware must be. Liverpool and Manchester United are both out, Chelsea and Manchester City will see the Premier League as a more attainable and desirable goal, and Unai Emery would much prefer Europa League glory over Carabao Cup success. Tottenham should embrace this opportunity.

West Ham should not be a mere footnote, and will be desperate to exact any measure of revenge possible for their unfortunate 1-0 defeat earlier this month. Manuel Pellegrini is one of just two managers remaining in the competition to have won the League Cup before, and will be more inclined than Pep Guardiola to play a strong team. The Hammers need to build momentum wherever possible if they are to pull clear of the Premier League relegation zone.

But Tottenham need to learn from the mistakes they made at the same stage against the same team last season, and accept that while the Carabao Cup might “not change the life” of the club, it would be a vital step in their development. A quarter-final place is at stake and, from there, the finish line is in sight.

Player to watch – Phil Foden
“I believe he will have a lot of minutes this season,” said Pep Guardiola in September. “After that Gareth has his own decision,” the Manchester City manager added, placing the burden squarely on the shoulders of the England boss.

Southgate’s decision to leave Phil Foden out of his first post-World Cup senior squad was questioned by many, but the reasoning was obvious. Foden had starred in the Community Shield but played just eight minutes of City’s first six games of the season. As promising a talent as he clearly is, he needs to be playing for club to feature for his country.

Seven days after Guardiola promised the midfielder “a lot of minutes”, he was given 21 in a victory over Cardiff. Three days later, he started, scored, assisted and played the full 90 minutes in a Carabao Cup tie against Oxford. Both manager and player were delivering on their ends of the bargain.

But since impressing against Oxford, those opportunities have dried up once more. Foden did not even make the matchday squad against Hoffenheim, was given two minutes against both Brighton and Shakhtar, stayed on the bench against Liverpool and played the last quarter of an hour against Burnley. He was again an unused substitute against Tottenham, meaning he has played 19 minutes in the last six matches.

The Carabao Cup is likely to be his saviour this season, which brings added pressure on his own performances. If Foden wishes to play, he needs to keep City in this competition for as long as possible. And considering chances in the Premier League are so difficult to come by, he must make the most of Thursday’s meeting with top-flight Fulham.

I’m looking forward to the team we put out for Fulham. Foden, Brahim, Danilo, Muric all must play.

Team to watch – Arsenal
And so the 11-game winning run becomes a 12-game unbeaten run as seamlessly as an Alexandre Lacazette handball. Arsenal came away from Selhurst Park on Sunday having not won a game for the first time since August, yet could hardly argue they deserved more.

For once, a second-half rejuvenation could not save them. Granit Xhaka was less a chink in the armour and more a gaping hole at left-back that Crystal Palace eventually exploited to earn a draw, and thus provide a little more clarity as to where Arsenal really are. The pretence that they could challenge for the title was as naive and misguided as the claims that they had not improved since Arsene Wenger stepped down. Football’s tendency to only view things as brilliant or terrible means Arsenal have been unfairly pigeonholed into one box or the other.

The truth is that they are a good team with obvious flaws. The improvements under Unai Emery are obvious to those who wish to see them, but there is still considerable work to be done. A comfortable League Cup tie at home to Blackpool, 12th in League One, provides a chance to restore some of the confidence and positivity that was sapped away at the weekend. But with Liverpool waiting in the wings, complacency must be avoided. Can Emery balance the importance of rotation with the need to keep momentum?

Manager to watch – Frank Lampard
“As soon as I finish playing I’d like to take it up and maybe be a manager,” said Frank Lampard in October 2016. “It’s hard though because I only want the Chelsea job.”

For now, this is as close as the 40-year-old will get – which in itself is a remarkable achievement. Lampard only retired as a player 20 months ago but has made short work of climbing the coaching ladder, not quite starting at the bottom, but certainly making his way towards the top. There is a considerable amount of work to do before he reaches that point, but the signs suggest he is prepared for the journey.

Derby are more than content with sitting sixth in the Championship. The Rams are finding their groove under the new manager, and are starting to express themselves more freely. A 2-1 win over Sheffield United was followed by a 4-1 dismantling away at West Brom. Saturday saw them face Middlesbrough in their third game against a direct promotion rival in seven days, and they were unfortunate to only draw.

Tony Pulis picks an extra defender for Derby’s visit and goes 5-3-1-1. Frank Lampard sticks with his bonkers 4-1-1-4 and after 55mins Derby are leading away at Boro. More Lampards, please.

Tony Pulis noted, after escaping with a point, that Derby “have got the wind behind their sails”. The Welshman knows more than most the power of a team with an identity and a purpose, and of a manager with a clear vision. Lampard is reaping the rewards from a high-pressing, pass-centric style. Derby rank second for shots per game, third for average possession and fourth for total passes this season. They were 16th for shots and 12th for passes in 2017/18. It is a remarkable turnaround, testament to both Lampard and assistant Jody Morris.

After beating Jose Mourinho in the last round, Chelsea are an even greater obstacle. For a man who credits his time both as a player and as a coach at Stamford Bridge for his current success, it will be interesting to see how Lampard fares.

Crewe are the side mired in the bottom half, with former Mansfield defender David Artell struggling to build on the six wins in their last nine games of 2017/18 that propelled them to safety. A victory over Grimsby has helped ease their relegation fears this season however, as they enjoy a nine-point gap over Cheltenham in 23rd.

Mansfield are managing the rather delicate balancing act of being both good and sh*t. They are six points off the play-offs with two games in hand, yet have won just four of their 14 games. Exeter are the only side to beat them, meaning they have drawn nine – or 64.2% – of their games.

With both teams in the rare position of enjoying positive results at the weekend, something will have to give under the floodlights on Tuesday. How excited are you right now?

European game to watch – RB Leipzig v Hoffenheim
Fans of domestic cup competitions are being positively spoilt this midweek. Not only is the Carabao Cup in full flow, but the Copa del Rey, EFL Trophy, FA Trophy and Welsh League Cup bring some added delight on Tuesday, Wednesday and Thursday.

The DFB-Pokal is also here to entertain us, and presents a rare meeting of two Bundesliga clubs in the second round. While Bayern Munich visit SV Rödinghausen and Borussia Dortmund host Union Berlin, fifth takes on eighth as Hoffenheim travel to RB Leipzig.

Leipzig, fresh from crushing Celtic’s European dreams, are in good spirits. They have lost just twice all season, and are coping well after another summer of departures. Hoffenheim are just three points behind in the Bundesliga, and proved their credentials at home to Manchester City in the Champions League earlier this month.

But the main characters of this story are the managers. Ralf Rangnick took over Hoffenheim in 2006, lighting the touchpaper for their incredible rise and taking them from Germany’s third tier to the Bundesliga for the first time in their history. He is now in the midst of his second temporary spell as Leipzig manager, with current Hoffenheim head coach Julian Nagelsmann confirmed to replace him at the Red Bull Arena at the end of this season. Drama.