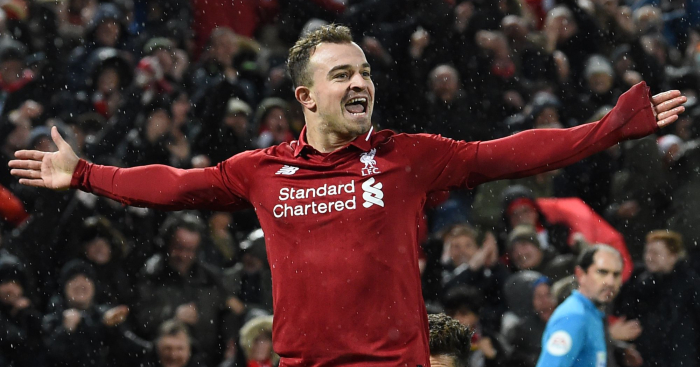 Jose Mourinho was right when he said of Mauricio Pochettino that “the day he starts winning trophies he changes his communication”. Whether the Tottenham manager is right to dismiss half of the club’s potential trophy haul so readily is immaterial; he would happily eulogise over the importance of one of the secondary competitions if he was to accidentally win it.

But two cup exits in four days is sure to crystallise what was already absolutely clear: that the Premier League is Tottenham’s bread, and the Champions League is their butter. The rest matters nought to them, regardless of the incessant debate.

That naturally increases the pressure on their remaining games when the fixture list becomes so streamlined. With the FA and Carabao Cups no longer a distraction, Tottenham face at least 17 games that they must win, and they cannot afford to rest players. A squad already stretched to its physical capacity is about to be pushed even further.

Oh to be in the shoes of Watford, who can afford to make 11 changes to their starting line-up in both the third and fourth rounds of the FA Cup, and still make the lightest possible work of trips to non-league and Premier League opposition.

It makes the Hornets possibly the worst kind of opponent for Tottenham to face right now. If Watford beating them in September was not enough of a warning sign, their recent results ought to be. No Premier League club has lost fewer of their last ten games in all competitions than Javi Gracia’s men.

Pochettino’s Tottenham have only been beaten home and away by the same team in a single Premier League season five times, and just twice since his first campaign in charge. Watford will hope to join 2017/18 champions Manchester City and 2015/16’s relegated Newcastle in this most distinguished of groups.

So a Tottenham side who sit eighth in a Premier League home table, whose squad depth is proving problematic and whose form has started to slip, host a Watford outfit who sit seventh in a Premier League away table, whose squad depth is vast and underrated, and whose recent form is arguably the top flight’s best. It is far from a foregone conclusion.

Player to watch – Xherdan Shaqiri
It feels like an age since Liverpool last played, so much so that Manchester City have won three games by an aggregate score of 9-0 in that ten-day spell.

Pep Guardiola will extol the virtues of maintaining rhythm and building momentum, but Jurgen Klopp will have been perfectly happy with the hand he has been dealt too. Liverpool’s mini-break came at an opportune time with injuries mounting and performances wavering.

The 4-3 victory over Crystal Palace was a reminder of a bygone era that Klopp hoped Liverpool had outgrown: that of the free-scoring but defensively inept side. He will pray that it was a one-off, a brief slip back into old habits.

It also gives the German an excuse to freshen things up. Naby Keita’s Palace performance was as disappointing as his entire spell thus far, while James Milner is suspended, pushing Fabinho into right-back if he is fit.

Shaqiri should be the beneficiary, offering the sort of creativity and drive that few can provide in this squad beyond the front three.

He might also be the unexpected answer if Klopp wishes to restore some defensive stability. Liverpool have conceded just two goals in Shaqiri’s ten Premier League starts this season, with his work-rate and mere presence proving invaluable in forcing teams to stand off. Attack really is the best form of defence sometimes.

Manager to watch – Ole Gunnar Solskjaer
History is tantalisingly close. No manager has ever won their first seven Premier League games in charge of any club, yet a stop-gap whose only previous experience on these shores culminated in relegation stands on the precipice.

Pep Guardiola and Carlo Ancelotti both started their Manchester City and Chelsea reigns with six wins apiece, but their foundations were solid, their squads settled and their paths clear. Ole Gunnar Solskjaer was not afforded such luxuries, yet has overseen an immediate ceasefire after being parachuted into a warzone between players and manager.

His achievements thus far have been beyond even the wildest expectations. Solskjaer has been in charge for 41 days and his eight successive victories in all competitions is already more than David Moyes and Louis van Gaal (both six) ever managed at Old Trafford. Jose Mourinho’s longest run of nine straight wins in all competitions can be matched at home to Burnley on Tuesday; Sir Alex Ferguson won more than eight consecutive games just once in his last ten years in charge (11 – January-February 2009).

Burnley should not be so callously dismissed, of course. The Clarets have been in fine recent form of their own, earning more points (10) than Liverpool (9) in an unbeaten last four Premier League games.

Tom Heaton’s return – and Joe Hart’s demotion – has seen Sean Dyche’s side pull clear of relegation with wins over West Ham, Huddersfield and Fulham, while a goalless draw away at Watford perhaps deserved more credit.

But Solskjaer has ensured that United games are now about them rather than the opposition or the manager. Asked about Burnley’s improvement on Monday, the Norwegian noted their “physicality” and “the front two”, but made a point to add that “we’ve turned the corner ourselves”. And how: if United do beat Burnley, they’ll have won as many times under Solskjaer in the league this season as they did under Mourinho in ten fewer games.

Team to watch – Everton
The good news is that Everton have won more and lost fewer games, scored far more and conceded slightly fewer goals, and have more points than at this stage last season. The bad news is that they were two places higher in the Premier League table under Sam Allardyce after 23 games last campaign, and have suffered similarly infuriating early exits in both cup competitions.

Everton have spent a hell of a lot of money to still be accompanying every stride forward with two sizeable steps back. And while the arrivals of Richarlison, Yerry Mina, Lucas Digne, Andre Gomes, Kurt Zouma and Bernard were an impressive and expensive blend of experience and youth, the biggest investment they made was in Marco Silva.

Giving the Portuguese a three-year contract was quite the statement, particularly considering his longest managerial reign to date is two years and eight months. But the perfect project club finally had its ideal leader: Everton would provide the riches to help realise Silva’s great vision.

“Young, dynamic, energetic and very modern,” were the buzzwords Farhad Moshiri used. Silva, a former director of football, was taking over his sixth club in seven years, having already won three trophies. Here was a 41-year-old with the experience of a 61-year-old and the ambition and drive of a 21-year-old: a bright, continental, attacking sun to pierce the drab, dreary, defensive Allardyce rain clouds.

If it was an appointment designed to unify the fanbase, it has certainly worked. Defeat to lower-league opposition in the FA Cup combined with Premier League stagnation, tactical predictability and familiar failings has only allowed the bubbling sense of widespread disillusionment to resurface.

The supporters, contrary to popular opinion, do not demand instant success. But they reasonably expected to win more league games than Cardiff since the start of October, and to be closer to sixth place than 18th. Silva might complain that he cannot possibly break the glass ceiling in a single season, but he is failing to clear the lowest of bars too. The gap to the promised land has only increased.

It bodes well for neither club nor manager that this is now the longest of his three Premier League tenures, the other two having hardly been successes. Both Everton and Silva are hurtling headfirst into the unknown, and absolutely must arrest the slide at Huddersfield. There is no time like the present for the short-termist to prove he has a long-term future at Goodison Park.

Football League game to watch – Luton v Portsmouth
While Portsmouth were rekindling their FA Cup love affair on Saturday, Luton were busy taking advantage of a rare opportunity. Their 1-0 victory away at Southend helped them to their highest league position since Championship relegation in 2006/07.

It has been a long and arduous journey. The Hatters flew too close to the sun in 2006, flirting with the Championship play-offs under Mike Newell before three successive relegations and crippling financial issues saw them crash-land in the Conference in 2009.

It took them five seasons – and three failed play-off campaigns – to escape non-league, and four more to rise up from League Two. But they are intent on wasting no more time, even absorbing the loss of manager Nathan Jones to maintain their promotion pace.

Portsmouth never fell quite as far, but their collapse came from an even greater position. Six seasons after winning the FA Cup and finishing eighth in the Premier League, they found themselves in England’s fourth tier.

Both have had relative success in their grasp, and both have let it slip through their fingers due to money problems. Which brings us to Tuesday, when the side with the best home record in League One hosts the team with the best away record. Luton are unbeaten at Kenilworth Road in the league since March; Tottenham (33) are the only club in the Premier or Football League to earn more points on their travels than Portsmouth (30).

The division’s top five are separated by just six points. The margins are ever so slim, but both these clubs are used to such precarious positions. Whoever keeps their balance best here will be primed to continue their recent renaissance.

The message was posted at around 12pm, mere hours before the Piper Malibu aircraft carrying both the striker and pilot David Ibbotson went missing off the coast of Alderney. The painful and painstaking search goes on.

Cardiff have been deeply affected by Sala’s disappearance – as has the wider footballing world – and will pay tribute to the forward ahead of Tuesday’s visit to Arsenal. But Nantes are still recovering from the loss of an influential and popular player too.

The 28-year-old was a relative nomad before he joined the French club in 2015. Sala had spent time with six sides in as many years since 2009, never settling in one place. Then Nantes came calling and he had finally found home. The striker scored 42 goals in 120 Ligue Un games over three and a half years, leaving an indelible mark on the first club that gave him a chance.

Manager Vahid Halilhodzic admitted that Wednesday’s game with Saint-Etienne, the Canaries’ first since Sala’s disappearance, “will be emotional”. The Stade de la Beaujoire will be full of adoring fans saluting their former star, and visiting supporters paying their own respects. It will also be an opportunity for players to bid la ultima ciao of their own.