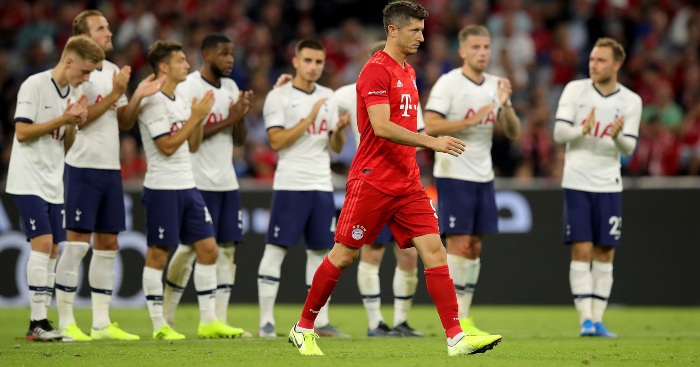 Game to watch – Tottenham v Bayern Munich
When the Champions League group stage draw was made, Spurs will have looked upon this fixture as an opportunity to steal a march on Bayern in the race for top spot and the likelihood of an easier draw in the last 16. That may still happen should Spurs win, but their recent form makes it more likely that Bayern will be the side disappearing off into the distance.

Mauricio Pochettino’s men are already on the back foot after the opening match-day draw at Olympiacos. A point was hardly the worst result imaginable but their collapse from 2-0 and that familiar feeling of surrender amid a woeful run from Spurs only poured fuel on the fire that was threatening to engulf north London.

Pochettino seems to spend much of his time fanning those flames rather than extinguishing them. The manager has turned somewhat on his players – especially in the wake of the Carabao Cup exit to Colchester – and, if reports are to be believed, some of the Spurs squad are happy to take him on under the assumption that he will be off at the first sign of an opportunity elsewhere.

The win over Southampton papered over a few cracks and Pochettino tried to ease tensions by suggesting that their gritty victory demonstrated their character and togetherness. It’s a start and Pochettino must ensure it represents a turning point because Bayern will offer a far sterner test of those qualities.

Bayern appear to have slipped into gear having not lost since their German Super Cup defeat to Borussia Dortmund on August 3. They moved back to the top of the Bundesliga at the weekend with a 3-2 victory over newly-promted Paderborn in which Robert Lewandowski, Philippe Coutinho and Serge Gnbary all netted. Coutinho especially seems to be finding his feet as Lewandowski’s main supply source. Even during his miserable season at Barcelona last season, a trip to Spurs offered the former Liverpool star some respite.

Coutinho could have his way with Spurs once more unless they can build on Saturday and continue to climb out of their rut. There are numerous theories as to what may have caused Spurs’ slump – Pochettino reckoned it was due to ‘different agendas’ in the dressing room. That being true, you might expect Bayern to ruthlessly expose those divisions to leave Spurs panicking about qualification, never mind top spot in Group B.

Player to watch – Erling Haaland
The Red Bull Salzburg centre-forward burst onto the big stage with a first-half hat-trick against Genk on his Champions League. Naturally, the 19-year-old has spent the last fortnight being linked with Manchester United.

His numbers are certainly impressive. For Salzburg this season, Haaland has notched 11 goals in the Austrian Bundesliga in addition to his Champions League heroics. His current total is a ridiculous 17 goals in 10 games in all competitions. Chuck in five assists and Haaland can claim to have been directly involved in a goal every 35 minutes. No striker in Europe can currently match his output.

Impressive though that undoubtedly is, we need more proof before we get carried away by Haaland’s talent. If he flusters Virgil van Dijk at Anfield on Wednesday night, then we’ll climb aboard the bandwagon and strap ourselves in.

That is presuming the son of Alf Inge recovers from the illness which kept him on the sidelines at the weekend when Salzburg made light work of Austria Vienna. Dose the kid up with Calpol and let’s see what he’s got…

Teenage goal machine Erling Braut Haaland has explained how he'll look to get the better of Virgil van Dijk when he faces Liverpool in the Champions League next week 👇 pic.twitter.com/IlhGTA0dhH

Team to watch – Liverpool
“It is a terrible match up for us in one sense because all the things we do well they are better at.” RB Salzburg coach Jesse Marsch there, bringing the positive. But Marsch need only look back to the weekend for a blueprint on how to make life difficult for the Reds.

Sheffield United were a dropped bollock away from ending Liverpool’s perfect Premier League record and taking at least a point off the European champions at Bramall Lane. How did they do it? Well, the Blades rode their luck somewhat too and relied on some awful finishing from Sadio Mane on the rare occasion the Reds got a clear sight of Dean Henderson’s goal. But Chris Wilder’s plan, which focused heavily on depriving Liverpool’s full-backs of space, was extremely effective and deserved more reward then just a standing ovation and a pat on the back.

Liverpool, at the moment, are finding ways to win. That is progress in itself, but the ‘f*cking mentality monsters’ will have to click at some point if they are to achieve their Premier League dream and fight on the fronts Klopp plans to conquer. The visit of the Austrian champions offers them a chance to go through the gears against a side the opposition coach admits is markedly weaker.

Of course, victory is more important than performance in the wake of the 2-0 defeat at Napoli on match-day one but ideally, Liverpool could do with a procession rather than another slog, especially with Leicester, Manchester United and Tottenham to come in their next three Premier League games.

Manager to watch – Frank Lampard
The Chelsea boss has certainly toyed around with his new side during the early stages of the season and though sometimes those changes have been enforced, on other occasions Lampard has changed shape and personnel as he looks for the right blend with the Blues.

The experiments are set to continue when Chelsea go to Lille’s Stade Pierre Mauroy on Wednesday. They are already playing catch up with Valencia and Ajax after a hugely disappointing home defeat to the Spaniards and Lampard cannot afford another defeat against the side perceived to be the weakest in the group.

Matteo Kovacic is likely to come back into the XI after being rested for the win over Brighton at the weekend and the Croatia midfielder’s form is certainly one for Lampard’s ‘W’ column. After an underwhelming season on loan last year, Kovacic has been one of Chelsea’s better midfielders this term, whether playing in a two or a three.

Which is handy because N’Golo Kante has been in and out of the side while he battles niggling injury problems. Again, Kante missed the visit of the Seagulls, presumably to give him more time to recover for the trip home.

Lampard needs the likes of Kovacic and Kante around his younger players because, as he acknowledges, there is a knack to playing in Europe that Chelsea’s starlets have yet to grasp. And too often, Chelsea have ‘forgotten themselves’ and veered away from the high-tempo stuff that has been a theme in their better performances. Finding a balance between that and negotiating a European away trip, one that needs to be won, makes Lampard’s job this week even more delicate.

Football League game to watch – Leeds v West Brom
Leeds battered West Brom at Elland Road last season. Both sides were going for promotion when they met in March but United blew the Baggies away as they moved to the top of the Championship during what looked like an unstoppable march towards the Premier League. Of course, the wheels fell off and both sides suffered play-off heartbreak but as they prepare to meet again, it is the Baggies who sit top of the table.

Slaven Bilic’s side are the only unbeaten team in the Championship and avoiding defeat on Tuesday night will see them go ten games unbeaten at the start of a league season for the first time in their history. The Baggies are clicking at both ends and Bilic is unlikely to be forced into any changes from the side that won 2-0 at QPR.

The same cannot be said of Leeds. West Brom are only top because Leeds lost at Charlton on Saturday and their form at home is little better. They have little problem dominating their visitors but killing them off appears beyond Marcelo Bielsa’s men. They have netted only three times at Elland Road this season – no team in the Championship has scored fewer goals at home.

The absence of Pablo Hernandez doesn’t help with that, though creating opportunities is not a concern for Bielsa. Finishing them certainly is. Patrick Bamford has been getting the nod over Eddie Nketiah though when Bielsa used them both on Saturday, it appeared that neither had previously been introduced. Helder Costa offered even less on his full league debut for the Whites when they had 72% possession and 19 attempts on goal.

It seems unlikely that Leeds will suddenly discover a cutting edge in time for Tuesday but Bielsa needs to come up with some kind of solution before the pessimism really takes hold again at Elland Road. Beating one of their main promotion rivals, ideally in similar fashion to their last meeting, would go a long way to keeping a lid on it.