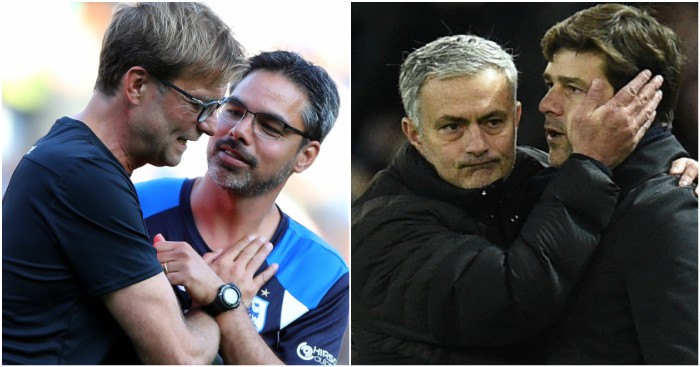 Game to watch – Tottenham v Manchester United
After their last meeting, Jose Mourinho felt it necessary to seek out a TV camera before which he put his fingers to his lips following a 1-0 victory for the Red Devils. That win against a subdued Spurs came on the back of criticism for the manager following his decision to park the bus at Anfield, a week before his players missed their stop altogether at Huddersfield.

Mourinho takes United to Wembley for their first ever league match at the national stadium in a rather better frame of mind. The Red Devils have won their last five matches, all the while keeping six consecutive clean sheets. Then, of course, there is the signing of Alexis Sanchez.

The Chilean’s arrival has given the club a huge lift and there is little doubt he will retain his place and be given the platform to build upon his encouraging debut last week. Whereabouts in his XI, only Mourinho knows right now. Sanchez started from the left last Friday but given Anthony Martial merits his place – especially since it was he who buried Spurs at Old Trafford – it would not be a huge surprise to see the new boy moved one or two places across the forward line.

“We are playing well and we deserved these results,” said Mourinho on Monday of United’s impressive start to 2018, but the run should be put in some context. Their biggest test came against an out-of-sorts Burnley side, while struggling Everton and pre-Paul Lambert Stoke were the only other Premier League assignments. The win at League Two strugglers Yeovil was routine enough, while Derby made United sweat before their resistance was eventually broken in the FA Cup.

This is an entirely different test, even if Mourinho no longer classes Tottenham as a threat in the Premier League. That doesn’t mean he doesn’t rate them, mind.

“I say honestly they are a Champions League contender, they can reach that level,” said Mourinho on Monday. “They have some of the best players in the country, a very good manager and a very difficult opponent.”

Mourinho’s comments indicate that he sees Spurs as inconsistent and that’s certainly true of late. Mauricio Pochettino’s side have drawn three of their last five and, against United, they have a point to prove. Pochettino will be aware that Mourinho has got the better of their previous battles, with the United boss having won 10 of their 13 head-to-heads.

Neither side impressed when they met at Old Trafford three months ago, but that was a Spurs side shorn of Harry Kane. With both sides feeling more positive about themselves, surely this one won’t be a damp squib too?

Player to watch – Henrikh Mkhitaryan
Sanchez’s move in the opposite direction has certainly cast a shadow over Mkhitaryan’s new start, but that probably suits him just fine.

The Armenian is set to feature for his new club for the first time on Tuesday night when Arsenal go to the Liberty Stadium – where Mkhitaryan has already claimed a couple of assists this season. They came during a barnstorming start to the campaign with five assists in his first three matches, but the playmaker regressed to his mean shortly after, leaving Mourinho to consider him surplus to requirements.

It isn’t clear how Mkhitaryan will fare at Arsenal, but it will be fascinating to find out. Though very obviously technically gifted, Mourinho supposedly doubted his mentality to achieve at the very highest level. He looks every bit the typical Arsenal player, but no one yet knows whether that’s a compliment.

Most fascinating in the short term is how Arsene Wenger chooses to use Mkhitaryan. After four days of training last week, the Arsenal boss admitted he was not sure how best to play the 29-year-old, seemingly ruling out only the defensive midfield role.

At United, Mkhitaryan was more productive in a central role, having a direct role in 15 goals in 26 appearances through the middle. At Dortmund, during his final season, he divided most of his time between the flanks and had a hand in 25 goals on either side. Over to you, Arsene.

Team to watch – Liverpool
“Liverpool look vulnerable at the minute,” said David Wagner, which seems mental given we are only two games on from the Reds inflicting upon Manchester City their first Premier League defeat. But this is Jurgen Klopp’s Liverpool and Wagner is right.

Since that thrilling victory over Pep Guardiola’s almost all-conquering City, Klopp has seen his lose 1-0 at Swansea last week before being dumped out of the FA Cup by fellow bottom-three dweller West Brom.

Klopp says he has made his players sit through a replay of the West Brom defeat because, apparently, playing in it wasn’t bad enough. For the Baggies’ second goal, the manager was able to identify the points where almost his entire team failed in their individual duties, but such disregard for defensive responsibilities is what we have come to expect from the Reds. Very often, their attacking qualities will bail them out. Twice in the last eight days, that has not happened.

Another problem for Klopp is that his best man Wagner has a blueprint for how to get one over on his mate. The Huddersfield boss, who himself was left to rue individual mistakes at the weekend, watched Swansea run Liverpool’s F1 car off the road in south Wales last week knowing very well that, as they showed against Manchester United in November, the Terriers are capable of doing the same job. And Lord knows they need a lift after losing their last three in the Premier League and going six without a win.

But, Klopp being Klopp, he will accentuate the positives. He will point to the 18-match unbeaten run that went up in smoke in Swansea and urge his side to focus on the feeling that sparked, rather than the hangover the last week has delivered. Klopp is well aware that Huddersfield will try to recreate the atmosphere that caught Man United cold and they will offer a “proper fight” in West Yorkshire. Liverpool need to get far closer to matching their opponents’ appetite for a scrap than they have managed in the last two matches.

Manager to watch – Javi Gracia
“I do not understand many things they sang,” said Javi Gracia after the FA Cup defeat at Southampton on Saturday. The new Watford boss, though, surely grasps English well enough to understand the sentiment behind the travelling Hornets fans’ chants of “we’re f*cking sh*t”.

After their ninth defeat in 13 matches, perhaps the away support made a valid point. Certainly, Gracia could do little other than accept that Watford “need to improve many things”, ideally before they travel to Stoke, who have had the advantage of 11 days on the training ground for their new manager to implement his changes.

Gracia hasn’t had the luxury of time with his new players since his appointment last week, nor does he have it in the coming weeks with points an immediate priority. The build-up to the Stoke trip is being dominated by transfer business, with Watford having added Gerard Deulofeu on loan. After the final whistle at the Bet365 Stadium, Gracia will have just over an hour to get any other deals done.

But Gracia was appointed because the Watford hierarchy believe he can eke more out of the current players than they have offered of late. He is a pragmatic coach but despite the deficit of time, especially in comparison to Lambert, Watford need to demonstrate that Gracia has been able to get his principles across.

One-on-one battle to watch – Alexis Sanchez v Kieran Tripper
Frankly, there’s a lot of guesswork going on here. Let’s assume that Sanchez will play off the left, initially at least, and that Trippier, not Serge Aurier, will be in direct opposition. Aurier against Sanchez, with Davinson Sanchez patrolling his left shoulder, would be a lot of fun to watch but the former PSG defender has been struggling with a calf injury and Pochettino may opt to retain Trippier in his XI.

Sanchez has already made something of a mug of Trippier once this season, when Arsenal beat Spurs 2-0 in November. Trippier, though was playing as a right wing-back and the feeling is that Pochettino will play a back four against United at Wembley. Trippier also has a positive experience to reflect upon, with Ben Davies remarking after the derby against Arsenal in April that the England defender “marked Sanchez out of the game”. So, we’ll call it 1-1.

Knowing full well the emphasis Spurs place on their full-backs to provide attacking width, Sanchez will get his first taste of what it is like playing in one of Mourinho’s machines. Defensively every man has his job and Sanchez won’t be spared. His industry is rarely doubted but Sanchez must find the balance between leading United’s charge and helping to stop Tottenham’s, which is something other attack-minded players have struggled with under Mourinho at United.

Football League game to watch – Birmingham v Sunderland
These two met just before Christmas when both were in the relegation mire. Both have won two games in the five since their 1-1 draw, but still the Blues and Black Cats are rooted in the relegation zone.

Hosts Birmingham are second from bottom, nestled just below Sunderland, with both looking for a win that could see them climb out of the drop zone if Hull don’t beat Leeds at home.

After the wheeling and dealing, and chopping and changing, under Harry Redknapp, Blues boss Steve Cotterill has settled on his best XI and he’s certainly milking it. Prior to the confidence-building FA Cup draw at Huddersfield on Saturday, Cotterill had made only one change to his XI in five matches.

Sunderland appear more likely to be distracted by the looming transfer deadline, but after the 1-0 win at Hull which preceded 10 days rest, Coleman will feel more encouraged that his side can create while retaining the improved defensive solidity they have shown since the new manager’s arrival.

European game to watch – AC Milan v Lazio
Barca versus Valencia would have been a fun watch but, according to the schedules, Sky Sports aren’t broadcasting the Copa del Rey semi-final first-leg meeting of La Liga’s leaders against their third-placed rivals.

However, as an alternative to BT Sport’s offering of Tottenham v Man Utd – if for whatever reason you feel you need one – then Sky are showing the Coppa Italia first-leg clash between AC Milan and Lazio.

If the fixture has a familiar ring to it, that will be because the two sides met on Sunday in Serie A. Milan, resurgent under Gennaro Gattuso, recorded their fourth win in five unbeaten matches since Christmas to edge towards the top six, with Lazio suffering their first defeat in nine.

Sunday’s affair was a tight encounter and you’d expect the same in the first of a two-legged tie. So just watch Spurs v United instead.