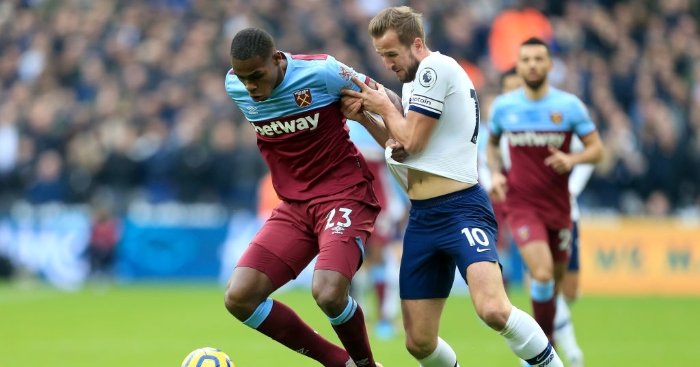 So many games, including Spurs v West Ham. This means more…

Game to watch – Tottenham v West Ham
We usually choose an inter-Big Six clash by default but Chelsea v Manchester City is not a must-win game for either club; it might be a fascinating tactical battle and it could certainly tell us a great deal about Frank Lampard (see below) but it could also feel like a Community Shield ‘clash’, a ghost game with only the illusion of importance. The capacity for quality might (might?) be lower in our chosen match but right arms would be cut off for victory, even without the added frisson of London needle.

There were moments in Tottenham’s draw with Manchester United on Friday night when there appeared to be some semblance of a plan from Jose Mourinho that did not consist of parked buses and crossed fingers. ‘These were 90 minutes to prove that, despite the respective narratives, Spurs and Manchester United are not at all far apart,’ we wrote in 16 Conclusions. They are both heavily flawed but this was not the clash of unstoppable force and movable object the pre-match media would have had you believe.

Victory over West Ham would see the league table reflect that near-parity, three points taking them within a single one of fifth place and the prospect of ill-deserved Champions League football. That could only ever be painted as success for Mourinho, who took over in a lowly 14th. Never mind the quality, feel the prospect of unlikely qualification for the Champions League. The defence is ropey, the midfield is lightweight and the promising forward line is under-cooked but that will matter little at the end of another 3-2 win over West Ham.

The Hammers might want it even more; they cannot rely forever on the teams below them being that bit worse. Victory on Tuesday would transform the bottom of that table, creating a three-point gap (with a better goal difference) that would feel like a chasm before their rivals play later in the week. The problems with that plan are many but can be distilled down to two: 1) David Moyes has never beaten Jose Mourinho in 13 meetings and 2) West Ham are rotten.

Player to watch – Paul Pogba
Listen to Gary Neville instead of the old white men shouting at clouds about Pogba: “I do believe he’s the one real world-class player in Manchester United’s squad. He’s the one who should be leading from the front, and if there’s continuous speculation over his future it isn’t helpful, it creates doubt in the dressing room. Now, I feel there’s a better chance of that team really succeeding, and I think they’ll play at Old Trafford on Wednesday night, and there won’t be any doubt that he’ll play with Bruno Fernandes.”

Those who wish to paint Pogba as the key reason for Manchester United’s under-achievements are one-eyed and foolish, but the truth is that Pogba has not been a big enough part of the solution; he has not been a leader and he has not been a catalyst to greatness; he has just been a very good player whose motivation ebbs and flows with the form of those around him. Perhaps that was all he could ever really offer and it was unrealistic to expect or seek more.

But as Manchester United improve, so should Pogba, who looked not just effective but enthused against Tottenham on Friday night. It was a cameo that showcased his trickery, his vision and his physicality and he will surely be unleashed from the start against Sheffield United on Wednesday night. There are still many, many questions about that mouthwatering Fernandes/Pogba axis but it has passed the first, short test.

Team to watch – Liverpool
Let’s be honest, that was poor. Whether we blame a lack of motivation, a lack of fans, a lack of fitness, a lack of a left-back or a lack of Mo Salah, or a combination of all those things, that was poor. This is not about Liverpool somehow not winning the title (that is impossible) or Liverpool’s title win in the end being undeserved (that is ridiculous) but there will undoubtedly be a sense of anti-climax if they limp over the line. And perhaps more importantly, they will give unnecessary hope to all those teams who have been watching Liverpool disappear into the distance since August.

If you are Chelsea, you will take heart from a lead cut to ‘just’ 20 points. If you are Manchester City and you end the season in the Premier League’s finest form, you can see this campaign as the blip and your superiority as the norm. Every club in a pack that has long since stopped chasing will be buoyed by any and all signs that Liverpool are not capable of maintaining form over a whole, disjointed season, never mind for the half-decade needed to create a legacy.

Manager to watch – Frank Lampard
Nobody should expect Chelsea’s defensive problems to be solved in three days, but there should be a reaction to Sunday’s win over Aston Villa that focuses on something other than the attacking options open to a manager that could bring Christian Pulisic, Ross Barkley and Tammy Abraham off the bench. In contrast, none of Chelsea’s four senior centre-halves look fit for title-challenging purpose and they could be torn apart by Phil Foden, Raheem Sterling, Riyad Mahrez and Kevin de Bruyne on Thursday. Lampard cannot improve his centre-halves overnight (if at all) but he has to come up with a plan to limit the damage.

That plan might involved Azpilicueta joining Antonio Rudiger an Andreas Christensen at the heart of the defence and using the creativity of Marcos Alonso and Reece James in the kind of formation that won Antonio Conte the title. It also won three points the last time Chelsea faced a big club in the Premier League, but that was Spurs and this is Manchester City. Can Lampard prove to be a strategist as well as a persuader?

European game to watch – Barcelona v Athletic Bilbao
Barcelona were forced to cede top spot to Real Madrid as punishment for their failure to score against Sevilla and now – in the week when Real should swat aside Mallorca at home – they face Athletic Bilbao, themselves unbeaten since the restart. If we tell you that Barcelona have failed to beat Athletic in each of their last three La Liga meetings, you might be tempted to switch over for the second half after you have watched Spurs rattle three past West Ham/draw 0-0 in a rotten, rotten game.