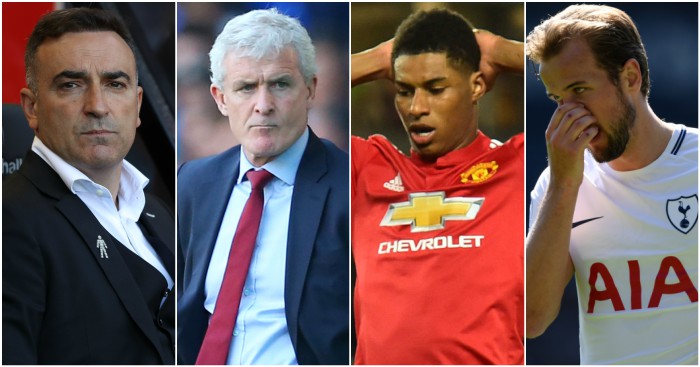 Game to watch – Swansea v Southampton
The closest the Premier League has to a relegation play-off; this meeting at the Liberty Stadium could be a loser-takes-all affair.

Swans and Saints sit level on 33 points, with Mark Hughes’ side leapfrogging Tuesday night’s hosts at the weekend by virtue of their better goal difference. The two sides appear to be experiencing contrasting form, with Swansea having suffered five defeats in their last seven, scoring only two goals during that run, while Saints are now three without defeat – though it could have been so much better for Hughes’ side had they not let slip a second successive victory in the 96th minute at Everton on Saturday.

Conversely, Carlos Carvalhal remains remarkably buoyant, while Hughes appears his usual downbeat self after the weekend’s misfortune. The Saints boss, though, will have seen enough to travel to south Wales in a more positive frame of mind. If Carvalhal is not worried, which he insists he is not, then he either knows something we don’t, or he is wilfully ignoring what is going on before him.

“I am not worried because I have players who can score,” he said after a bizarrely timid defeat at Bournemouth on Saturday. “Even if they are not scoring, we achieved goalscoring situations against Chelsea and Everton. In the Chelsea and Everton games, we deserved much more than we got and I believe in my players and I believe they can score because we have got goalscorers in the team.”

The evidence suggests otherwise. Swansea’s top scorer, Jordan Ayew, has seven goals to his name, while Tammy Abraham is the next highest scorer with five. They have two between them in the last two months since the win over West Ham, and just as worrying as their lack of potency is the fact that no one else is stepping up. The Swans have created the fewest chances in the Premier League in that time, nine fewer than already-relegated Stoke, which also contradicts Carvalhal’s optimism over his side’s creativity.

For Hughes, the main concern has been Southampton’s delicate defence, though recent weeks suggest he may have plugged a few holes. The Saints boss will also be aware of what is to come after the trip to Swansea – Saints face champions Manchester City on the final day, while Swans host already relegated Stoke. “Clearly the Swansea game is one that we can really decide our own fate,” admitted Hughes, who may feel that a point is of more use to Carvalhal on Tuesday. But both sides have to go into this relegation battle with the aim of all three.

Team to watch – Huddersfield Town
Town were safe a couple of weeks ago. At least, that was the assumption from the celebrations that greeted their last-gasp 1-0 win over Watford on April 14. The consensus was that the Terriers had done enough before a final four-game run that, in terms of points, looked good for nothing.

Surrendering to travel-sick Everton at home last week while others around them gained ground made those celebrations appear a touch premature. And when, prior to Everton’s late equaliser on Saturday night, it seemed they were about to be leapfrogged by Southampton before they went to Manchester City in 17th place the following day, you would understand if Terriers’ bottoms were squeaking.

But Tom Davies’ deflected strike and a most unlikely point and clean sheet at the champions’ coronation on Sunday makes for a Town back in bloom. That is not to say the job is done, but David Wagner takes his side to Chelsea in far more optimistic mood, with their first shut-out on the road since September suggesting they’ve rediscovered the defensive solidity that much of their success this season has been built upon.

The Terriers will need similar bite and appetite to chase when they go to a resurgent Chelsea who have eyes on an unlikely Champions League spot. What they need from the trip to Stamford Bridge and Arsene Wenger’s last hurrah on the final day when Arsenal visit the John Smith’s Stadium will be dictated by what happens at the Liberty Stadium on Tuesday night. Should Swansea avoid losing to Saints, then only the champions losing at St Mary’s on Sunday can relegate Town. A point from their final two games may well be enough and they appear much better placed now to achieve that at Chelsea than they did prior to the weekend.

Player to watch – Marcus Rashford
The Manchester United striker was one of the players to be thrown under the bus by Jose Mourinho following last week’s 1-0 defeat at Brighton and while the manager’s methods continue to be questioned, that is not to say he and Anthony Martial didn’t deserve their public rebuke. Their performances allowed Mourinho that one pleasure he enjoys almost as much as winning: the opportunity to say “I told you so’.

“For many months you are always asking me why this player doesn’t play, why that player doesn’t play, why this player is on the bench, why always Lukaku?” Rashford and Martial’s ineffectiveness demonstrated why Romelu Lukaku has been run into the ground this season, despite so many United fans clamouring for at least one of the young pair to feature on a regular basis, if not both.

Mourinho insisted before Brighton that he “trusts” Martial and Rashford, but if trust was in short supply before, then it will be hanging by a thread as United prepare to travel to West Ham on Thursday. Lukakau’s injury means Rashford will likely get the chance to atone for his rusty display on the south coast, though reports suggest Martial may sealed his own fate. Whether that will concern him is open to debate.

Rashford has said that while he is willing to play anywhere for United, the England star sees himself as a No.9. Mourinho doesn’t yet share that viewpoint, with Rashford’s limited opportunities – whether as a lone front man or as a duo – through the middle this term reaping just one goal and another assist. He may have already blown his chances of starting in the FA Cup final but Rashford needs an immediate remedy to last week’s ills, certainly for the sake of his longer-term future in his favoured position.

Manager to watch – Mauricio Pochettino
It may be unlikely but it’s quite feasible that Tottenham could go into the final game of the season outside the Champions League places. Pochettino’s men wasted a golden opportunity to seal their top-four place when they lost at the death against the Premier League’s then-bottom side and it now seems that Spurs need another four points from their final two games.

Rather than looking over his shoulder at Chelsea, Pochettino will likely be eyeing third place ahead of Liverpool, which can be achieved with home wins against Newcastle and Leicester. But recent form means Spurs are limping somewhat to the finish line, having won only one of their last four.

Pochettino insisted after the West Brom defeat that his side were not in need of a wake-up call, preferring to blame the result on a mixture of poor finishing and “a lack of aggression in possession”. However you explain their downturn, the manager needs to effect his players ahead of Newcastle’s visit to provoke some form.

“It was difficult to play, they played so deep,” said Pochettino of West Brom. If he thinks Newcastle will be positioning themselves any further up the pitch at Wembley, then Tottenham could slip up again to allow Chelsea the chance to go into the last day at least level with the London rivals.

One-v-one battle to watch – Harry Kane v Jamaal Lascelles
Harry Kane and Tottenham insist that the striker’s ankle injury isn’t causing him any problems, so there must be another explanation for his current form. The centre-forward looks knackered at the moment, as evidenced by his lack of sharpness in front of goal and his wayward touch. None of it bodes well for England and Kane’s form is in direct contrast to this time last season, when he scored eight in three games during the final week of the season to take the Golden Boot he so covets.

Maybe he simply needs a break. Despite the injury that had England fans so worried last month, he was back for the next outing at Chelsea and he has missed one Premier League game all season – the trip to Man Utd in October. Like his United counterpart (Lukaku) Kane hasn’t been afforded a rest because his stand-in (Fernando Llorente) is not up to scratch. Mourinho has admitted at various points this term that Lukaku needs a rest but Kane has played more minutes than the Belgian.

Kane’s direct opponent on Wednesday at Wembley is equally important to Newcastle. Lascelles has been so impressive that many feel he should be lining up alongside Kane in the England squad for the World Cup. But Gareth Southgate’s refusal to recognise Lascelles’ form with a call-up only seems to have spurred on the Toon skipper, who will see the opportunity to silence Kane on Wednesday as another chance to make his point to the national team boss.

Football League game to watch – Charlton v Shrewsbury
The Football League play-offs kick off on Thursday, with third-placed Shrewsbury heading to Lee Bowyer’s Charlton in the first of the League One semi-finals.

Despite having enjoyed a hugely impressive season that saw  Town come within a win of achieving a new points total, Paul Hirst almost has to kickstart his side again after coasting through the final four games of the season that held no possibility for moving up or down from third place. The Shrews have taken the chance to rest players ahead of one last push, with fresh legs preferred to momentum, which has been sacrificed following four draws and a defeat in the final five matches.

In contrast, Bowyer’s men have had to graft all the way to the finish line, though only a seven-goal swing on the final day would have denied them a play-off berth. The rookie manager already has a blueprint for beating Shrewsbury having won 2-0 at New Meadow only two and a half weeks prior to kick-off on Thursday.

Just seen that all 12 Football League play-off semi-final games are all scheduled at different times this year, all in an eight-day period and none clash with Premier League matches.

The EFL don't get everything right, but that's a brilliant move. pic.twitter.com/TiS2IW9hPV

European game to watch – Coupe de France final: Les Herbiers v Paris Saint-Germain
The Coppa Italia final takes place this week too, with Juventus and AC Milan clashing at the Stadio Olimpico in Rome on Wednesday night. There is very little the two Italian giants won’t know about each other, which cannot be said about the two sides facing off in the French Cup final.

The multi-millionaires of PSG are going for the domestic Treble as Unai Emery looks to end his reign in Paris on a high, but in their way are a side currently sitting just above the relegation zone in the third tier. Les Herbiers, whose players earn an average of £2200 a month and play in front of an average crowd of 1,400, are looking to become the first team from below the second tier to win the Coupe de France.

PSG represent the first Ligue 1 opposition Les Herbiers have faced during the competition and though he cannot participate, the presence of Neymar at the Stade de France highlights the huge mismatch as the minnows look to pull off one of football’s greatest shocks.