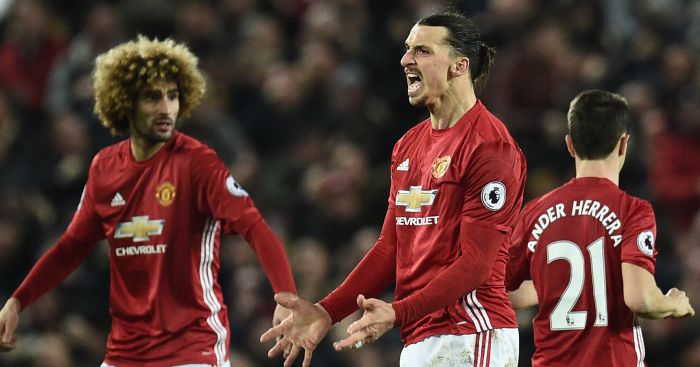 Game to watch – Liverpool v Chelsea
If you don’t love a full midweek Premier League programme, then I am afraid that we cannot be friends. And if we are friends, then you should know that I will be at choir on Monday night and then watching football on Tuesday, Wednesday and Thursday nights. At the moment, I am free for a drink on Sunday night, for I am not Daniel Storey and cannot even pretend to be interested in Juventus v Inter Milan. The main course clearly comes on Thursday, but Liverpool v Chelsea is one hell of an amuse bouche.

Jurgen Klopp’s record in 2017 so far reads P8 W1 D3 L4 F7 A10. Oh and two competitions exited. All eggs now lie in one basket and that basket could take one hell of a battering at Anfield on Tuesday night if Liverpool do not significantly improve. Whether you blame insufficient squad strengthening, an exhausting style, a hectic fixture schedule, the stubbornness of Jurgen Klopp or a combination of all four, the truth is that Liverpool are floundering.

“There are worse things in the world,” said Klopp on Monday as he talked about a season in which they have possibly exceeded expectations in currently being fourth, but the truth is that Liverpool are a) not in top four form and b) unlikely to be in the top four by Thursday morning unless they pull off the highly improbable. This is not a must-win (it can never be that against the champions-elect) but it is a must-convince-fans-that-the-season-is-not-over. Would they have taken this situation before the start of the season? Perhaps. Would they have taken this situation six weeks ago? Not a chance. Expectations shift, and not always for the better.

The refrain of ‘when Sadio gets back’ now sounds a little silly, as he will be at least as physically and emotionally shattered as his teammates. The most Liverpool fans should surely expect is that he is sat on the bench to provide an option; he is clearly Liverpool’s best chance of exploiting that potential weak spot between Gary Cahill and Marcos Alonso. Certainly, they are unlikely to be troubled by Adam Lallana spotting that weak spot and then turning to play the ball back to Emre Can.

Many, many words have been written (many of them unashamedly gleeful) about the wheels coming off at Liverpool, but with only six Premier League games in two months after Tuesday’s clash, the situation can easily be rescued when Jurgen Klopp once again has one or two weeks between fixtures. But can the confidence of players and fans also be rescued if they suffer yet another home defeat with the boos getting louder and louder? You get the feeling that one decent 90 minutes may well breed three or four.

Player to watch – Zlatan Ibrahimovic
If you think that Zlatan won’t care that he is a goal behind Alexis Sanchez and Diego Costa in the Premier League goalscoring charts then you are unfamiliar with the concept of ego. If you think that Zlatan will not have put a ring around the word ‘Hull’ on his little flip-out fixture calendar, then you probably don’t think that professional footballers have a little flip-out fixture calendar. You may be right.

Ibrahimovic failed to score against Stoke in the Premier League, Hull in the League Cup and was then denied the chance of shooting fish in a barrel against Wigan; he will relish a home clash with the Tigers and we are conservatively estimating eight or nine shots at Old Trafford on Wednesday night. Everybody wants to see that, don’t they? Well, everybody but Marco Silva and whichever poor chump is picked to play in goal.

Team to watch – Manchester City
Five goals in their last two games hints at Manchester City having recovered some of their mojo, at least in part because Gabriel Jesus could well end up being Pep Guardiola’s first unequivocal success as chief buyer at City. He looks pretty damned good and they will certainly be worth watching against a rejuvenated West Ham, with the potential for Jesus, Sergio Aguero, Raheem Sterling, Kevin de Bruyne, Leroy Sane and David Silva all being on the pitch at the same time if goals are required. And with that defence and goalkeeper, they may well be. This could be a 4-3 and come the end of Wednesday night, we may be very glad indeed that BT chose this one ahead of Manchester United v Hull.

City have been ridiculously written off in recent weeks but it’s worth remembering that they are in the last 16 of two cup competitions and only two points behind a sliding Liverpool in fourth. Unlike Manchester United, they do not have a bevy of ex-professionals and media friends declaring that things are going really bloody well, actually, so we are forced to recognise the truth: this season has felt like evolution when we were hoping for revolution.

But what they could produce in the next few months is enough goals to make neutrals find them sexy again. Jesus could save.

Manager to watch – Aitor Karanka
Former F365-er Philip Cornwall had a theory that any club who ‘earns’ less than a point per game over a Premier League season should be forced into a play-off to keep their place. Currently, Middlesbrough would be one of six pretty poor sides gearing up for a thrilling end to the season. Boro fans might actually welcome the chance of a thrill after a campaign that has so far been a tad forgettable; a first Premier League season in eight years should have been anything but forgettable.

The bookies have Aitor Karanka as the favourite in their ‘next Premier League manager to leave’ market, prompted by last week’s rumours that the Spaniard was once again ready to walk after criticising fans for disturbing his players with chants of ‘Attack! Attack! Attack!’ Having set up his team to be patient and risk-averse, the last thing he wanted was for them to attack either willy or nilly on the whim of the fans.

One-on-one battle to watch – Fernando Llorente v Maya Yoshida
If Fernando Llorente had fun against Liverpool’s defence, he will be shining his boots (and his forehead) at the prospect of facing a Southampton side stripped of its two senior centre-halves by ambition and injury. From starting just ten Premier League games last season, Yoshida is suddenly the Saints’ defensive leader in an unlikely partnership with Jack Stephens. It worked against Liverpool last week but it will face a different kind of test against a striker who thrives on balls into the box. And Paul Clement will have spent ten days working on exactly that plan.

Our alternative for this section was Harry Kane v Joleon Lescott, but surely David Moyes will not trust Lescott against the Premier League’s in-form side? Will he? Prepare to rubber-neck that car crash waiting to happen if so…

Non-English game to watch – Cameroon v Ghana
This very fixture at the same stage (semi-final) of the African Nations was 1-0 eight years ago. We would expect more goals this time around, with Ghana boasting the Ayew brothers. Watch the first half and then switch over to watch David Wagner’s wonderful Terriers.

Where is Mike Dean this week?
Apart from here?