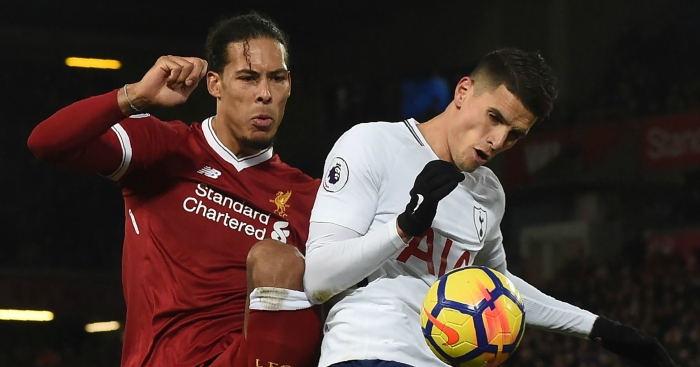 Game to watch – Tottenham v Juventus
In many ways, it was far from the ideal preparation. Juventus were unimpressive and uninspiring on Saturday. Sami Khedira was once again disappointing, Miralem Pjanic was unable to stamp his authority on the game, and Mario Mandzukic was ineffective. Tottenham, victors over Huddersfield the previous day, will have seen little cause for concern.

And yet the 1-0 win Juventus achieved away at Lazio serves as a reminder that this tie is far from over. That same result at Wembley on Wednesday would spell the premature end to Tottenham’s Champions League adventure, with the 2-2 first-leg draw last month handing them only a slender advantage heading into the return.

Lazio are the highest scorers in Serie A this season with 64 goals, yet were restricted to just two shots on target at home by a determined Juve. Daniele Rugani and Medhi Benatia, the former of whom did not feature against Spurs in the first leg, nullified Ciro Immobile, Luis Alberto and Sergej Milinković-Savić as Massimiliano Allegri used a three-man central defence to perfection.

Then came the killer blow. Paulo Dybala created something out of nothing, scoring the winning goal in stoppage time from Juventus’ first shot on target. Absent from the first leg in Turin, the forward will provide Tottenham with a completely different, and altogether more potent, threat to contend with if he starts. Gonzalo Higuain was given a rest and will be fresh.

Of course, Juventus cannot rely on the same tactics on Wednesday. They cannot look to contain the hosts before relying on a moment of individual brilliance late on. The onus is on them to attack Tottenham, to force the situation, to cancel out their narrow lead. They start this sprint 10m behind, and so simply keeping the pace of their hosts will not do.

Mauricio Pochettino said that Tottenham “arrive in a perfect condition” to face Juventus, and there can be little argument. The Italians have been runners-up in this competition in two of the past three seasons and have won six consecutive Serie A titles, yet Spurs eventually proved themselves as equals in Turin. For every Dybala, Gonzalo Higuain, Pjanic and Giorgio Chiellini, there is a Harry Kane, a Dele Alli, a Christian Eriksen and a Jan Vertonghen.

Juventus have won 13 of 15 domestic away games this season, but were humbled by Barcelona in the Nou Camp in September and held to a 1-1 draw by Sporting Lisbon in October. Combined with Tottenham’s home form, which has seen the Wembley curse dispelled with victories over Liverpool, Manchester United, Arsenal, Borussia Dortmund and Real Madrid, and they really do have a chance. Can the inexperienced young guns take advantage of the experienced Old Lady? No Wayne, not now.

Player to watch – John Stones
Before the turn of the year, there was arguably no England defender in better form than John Stones. City won 16 of the 17 games the centre-half started before injury in November’s win over Leicester curtailed his momentum. It was widely accepted that Nicolas Otamendi and Vincent Kompany were merely keeping his seat warm ahead of his return.

Since then, things have gone south again. Stones has started seven games since January, and City have failed to keep a clean sheet in each. The familiar mistakes have resurfaced, and the hamstring injury appears to have affected his confidence. Roberto Firmino embarrassed him in defeat to Liverpool in January, while he was burned by Will Grigg against Wigan on his most recent start in February.

If the first few months of the season represented two steps forward, he has reverted to type in devastatingly disappointing fashion since his return. Which places yet more importance on Wednesday’s game against Basel. City’s first-leg thrashing of the Swiss side means they can afford to rotate, and Stones will surely be in line to start.

That hamstring injury ruined John Stones’ season. He was quality before the injury but since coming back he has struggled for pace and even his passing not the same. He needs to start vs Basel.

He has not started a Premier or Champions League game since January 20, and Aymeric Laporte has arguably jumped ahead of him in the central defensive pecking order in the interim. It’s time for Stones to start rolling again.

Team to watch – Arsenal
If losing a fourth game in succession was not enough to highlight Arsenal’s plight, the aftermath surely sufficed. The Emporer has lost his clothes when Liam Rosenior and Steve Sidwell are providing insight into how to beat him.

Arsenal have not lost five games in a row in all competitions since March 1977. They will surely finish no higher or lower than sixth, their FA Cup dreams were dashed in January and their League Cup surrender somehow feels an age ago, such has been the scale of their defeats since. The Europa League is their final chance, Arsene Wenger’s belated encore.

As fate would have it, the Gunners have been pitted against a side that has won their last six games in all competitions. AC Milan are in supreme form, reaching the Coppa Italia final last month and continuing to improve under Gennaro Gattuso, the sh*t to Andrea Pirlo’s Nutella.

Manager to watch – Jurgen Klopp
“It’s the Champions League and the whole world is watching,” said Jurgen Klopp on Saturday. “I don’t think for a second about resting anybody.”

In his pre-match press conference two days later, the Liverpool manager reiterated the point. “We will not rest players,” he said. “We will maybe make one, two, or three changes but only to win the game.”

Klopp’s relationship with rotation has been mixed since he arrived at Anfield in October 2015. The club were eliminated from the League Cup and FA Cup and almost lost grip of their place in the Premier League’s top four all in the space of just over a month last season. They played ten games from New Year’s Day to February 4 2017, winning just one and losing five. Liverpool suffered 16 injuries in that time, and according to The Times, Klopp ‘told those closest to him the relentlessness of the schedule was a shock’.

The German would not allow the same situation to threaten another Liverpool season. Klopp has rotated his squad from August onwards, and while there were a few notable stumbles earlier in the season, there has been no fall. He has kept unerring faith in his policy, and it is paying dividends as they head into a crucial home straight.

With a visit to Old Trafford on the horizon on Saturday, the temptation would be to view the second leg of their last-16 tie against Porto as little more than an inconvenience, a speed bump. The Reds are 5-0 up from their first-leg demolition and surely through. But Klopp will know better than to sacrifice momentum purely to rest players who hardly seem short of fitness.

Mohamed Salah, looking to break the 40-goal barrier, will want to play. Roberto Firmino, one goal from making this his most productive season ever, would rue missing out. Virgil van Dijk, settling wonderfully in defence, would rather his progress was not interrupted. Players already in the side will not want to lose their places; players out of the side will expect to be given their chance. Klopp will know he needs to keep all these plates spinning.

One-on-one battle to watch – Jan Vertonghen v Paulo Dybala
Following the victory over Huddersfield, Jan Vertonghen made a point of stating that Tottenham had improved defensively of late, “even one-on-one”. Saturday’s shut-out was their eighth in 15 games in all competitions; the goalscoring exploits of Harry Kane and Heung-min Son are overshadowing performances at the other end of the pitch.

Eric Dier and Davinson Sanchez deputised ably during Vertonghen’s month on the sidelines, but Tottenham only stand a chance of keeping Juventus at arm’s length with the Belgian in the starting line-up. In the continued absence of Toby Alderweireld, Vertonghen might be the Premier League’s best defender right now.

He will get the chance to provide evidence of his own improvements, “even one-on-one”, against one of Europe’s most in-form strikers. Paulo Dybala has 15 goals in 20 Serie A games this season, and is busy doing this kind of madness.

Football League game to watch – Fulham v Sheffield United
Chris Wilder admitted it was “difficult to make sense of it”, while Slavisa Jokanovic described it as a “crazy game”. The two managers had just witnessed what remains the highest-scoring match of the Championship season.

Fulham were 17th in the league when they visited Bramall Lane; Sheffield United were second. Few expected much of an even spectacle, yet the Cottagers emerged 5-4 winners. Ryan Sessegnon’s hat-trick cancelled out Leon Clarke’s treble in a breathless 90 minutes.

In the 17 games since, Fulham have picked up more points (39) than any other side in the second tier. They are now fourth, and eating away at the five-point gap to Cardiff.

Sheffield United’s form has tailed off somewhat since, and yet the Blades are still eighth, dreaming of the play-offs and eager to exact some revenge after being on the wrong side of a nine-goal thriller four months ago. A scrappy 1-0 will do, but you can’t back against this Fulham.

European game to watch – Paris Saint-Germain v Real Madrid
In their entire 48-year history, Paris Saint-Germain have won 34 trophies. They have won both the Coupe de France (11) and Coupe de la Ligue (7) more times than any other club. Only five sides have won more than their six Ligue Un titles – a respectable tally, considering the division was founded 38 years before them.

Les Parisiens have not found domestic success difficult to come by, but their planned European dominance is yet to come to fruition. This is their 11th season in either the European Cup or Champions League: they have failed to progress past the first round or group stage four times, and have reached the semi-finals just once – back in 1995.

Carlo Ancelotti left the club in 2013, having taken them to the quarter-finals of the Champions League in his only season in the competition. Laurent Blanc took over and was handed the task of taking them to the next level; they reached the last eight and no further in each of his three campaigns.

“We need change. I have supported him for three years. Now we must think about what we will do next season to build a stronger team in Europe,” said club president Nasser Al-Khelaifi when sacking the Frenchman in summer 2016. In came Unai Emery, winner of three consecutive Europa Leagues with Sevilla. He was their Muhammad Ali: master of the knockout.

Yet Emery is staring down that exact same barrel two years on. His first campaign ended in glorious, Neymar-inspired last-16 failure against Barcelona, and he cannot call upon the injured Brazilian against Real Madrid on Tuesday.

If PSG fail to progress past Madrid in the #UCL, Unai Emery knows where the keys to the door is. 90 blame

PSG have a chance of overturning a two-goal first-leg deficit against Real. Neymar may be sidelined but Angel di Maria is in form and has a point to prove against his former employer. His inclusion means Kylian Mbappe, passed fit, can switch to his preferred left side.

The Ligue Un leaders have also won all 19 of their home games in all competitions this season, and each of them by at least two goals. That is a bare minimum if they are to end Real’s Champions League stranglehold.

But with domestic honours taken for granted, Emery’s job is on the line on Tuesday. If PSG have no problems firing Blanc for only managing to reach the quarter-finals, two consecutive exits at the last-16 stage can bring only one result.