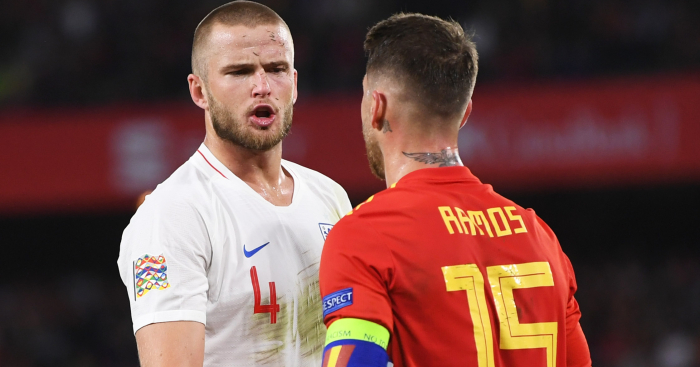 Sam Allardyce can’t fathom why Sergio Busquets is lauded as a genius for doing the same job as the much-maligned Eric Dier.

The two holding midfielders clashed in Seville on Monday night when England inflicted upon Spain their first home defeat in 15 years.

The Three Lions raced into a 3-0 lead before half-time prior to Spain scoring twice during a second-half they dominated.

But Dier and his team-mates restricted the hosts to few clear-cut chances and former England boss Allardyce was impressed with how the Spurs star won the midfield battle against his much-lauded Barcelona counterpart.

“The praise about Busquets must be stopped,” Allardyce told Talksport. “It was never evident last night, he looked out of sorts.

“He’s no better or worse then Eric Dier, for me.

“Busquets is a sitting midfield player who breaks up play, intercepts, passes it very quickly and is intelligent. That’s what he is. He’s not much more than that, but he gets a lot of praise for it.

“Whereas Eric Dier does a similar job, but sometimes gets loads of criticism for it.

“He [Dier] has got the capability of being that.

“Busquets has been a great player for Spain and Barcelona, don’t get me wrong. He’s a very effective player and is the first pick for every manager because he plays such a simple game.

“But we laud him as a genius, whereas our own we don’t, we criticise.

Dier most notable contribution was a crunching tackle on Sergio Ramos in the 12th minute which earned the England midfielder a caution but Allardyce says the challenge lifted the visitors.

“As a manager, you look at who is going get the fans on the edge of the seats. People will say that you can’t think of something like that to do it, but when you watch a game of football and you see that level of commitment, you saw the cheer it brings from the fans.

“It says, ‘we’re going to get stuck in tonight, we’re going to make an impression on Spain in all aspects of the game to win it’.

“That got a big cheer from the fans in the stadium and probably all the fans in England and certainly set the tone for the match.”