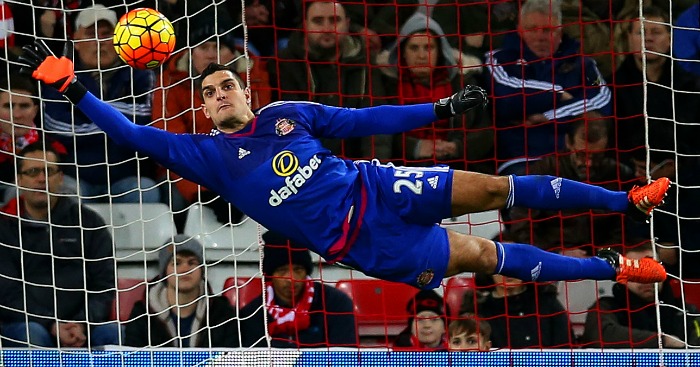 Pickford, 21, made his senior debut for the club in their 3-1 FA Cup third-round defeat at Arsenal on January 9 and did so well he retained his trip for last weekend’s Barclays Premier League trip to Tottenham, where he produced a string of fine saves yet still ended up on the wrong end of a 4-1 scoreline.

Allardyce believes he has a potential star of the future on his hands in the England Under-21 international, but Pickford will have to bide his time as he attempts to establish himself as the club’s number one goalkeeper.

Asked if Pickford had already achieved that status, Allardyce replied: “No, Vito.

“On the basis of his game against Arsenal, I thought it would be good to put him (Pickford) in rather than wait too long, put him in after a good game against Arsenal to see what he could do in the Premier League, but then assure Vito that for the time being he is number one and will continue to be number one until such time as his performances don’t acquire that position.

“It’s up to him now. He’s waited long and patiently for the chance to re-establish himself as number one. I believe before I came, a couple of years ago, he was player of the year, so he has shown those capabilities.

“Hopefully he can continue to show those capabilities and keep young Pick at bay. But we do know young Pick is eager to take his place and he knows that, so I think that’s good competition.”

It means Mannone should face Bournemouth on Saturday at the Stadium of Light, where the Black Cats will be eyeing victory over a side that could be pulled into the relegation reckoning.

Pickford and Mannone are likely to be joined at the Stadium of Light by a third goalkeeper before the end of the month after Costel Pantilimon was allowed to leave for Watford this week, although that is perhaps the lowest of Allardyce’s priorities for what remains of the transfer window.

Allardyce revealed on Thursday afternoon that he would like to add “perhaps another defender and another attacking player” to his squad following the captures of Bayern Munich defender Jan Kirchhoff and Trabzonspor striker Dame N’Doye.

However, Allardyce confirmed the club’s pursuit of Lorient defender Lamine Kone was over after a second breakdown in negotiations, and declined to comment on his interest in Swansea striker Andre Ayew amid speculation he may be prepared to use Fabio Borini as a makeweight in any deal.

Allardyce said: “I can’t speculate on that. Me saying I’m willing to use Fabio would upset Fabio; me saying that Ayew is definitely someone I want for this club means that Swansea could say I have upset this player by saying that I actually want him.

“If you look at past history, I think David O’Leary was probably the first to be punished for doing something like that. I don’t like anybody taking my money off me.”

Meanwhile, Allardyce defended Kirchhoff, whose debut at White Hart Lane saw him deflect a shot into his own net and concede a penalty, sparking widespread criticism.

The Sunderland manager recalled his time in charge of Bolton and said: “I remember Ivan Campo coming from Real Madrid. Disgraceful pundits called him a ‘clown’ and a ‘joke’. If you look at Ivan Campo’s record, he was a Real Madrid player who the season before had won the Champions League and won La Liga.”