Home All The News Big Sam: Walcott can do Everton team-talk at Arsenal 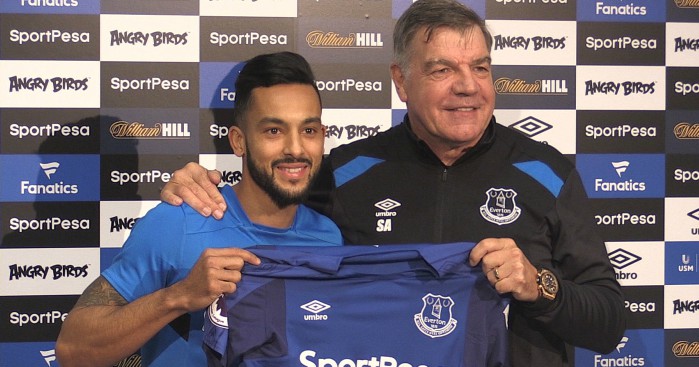 Everton winger Theo Walcott returns to former club Arsenal with manager Sam Allardyce insisting he can be a pivotal player for his new side in a way he was no longer for the Gunners.

By contrast Walcott has played the full 90 minutes twice since joining Everton, providing an assist in his first match and scoring twice in Wednesday’s win over Leicester.

And Allardyce expects the 28-year-old to play an increasingly important part over the coming seasons.

“He’ll be doing the team talk tomorrow,” joked Allardyce ahead of the trip to London.

“I think he is looking forward to it. I am sure he will get a good reception when he goes back to The Emirates considering the time he spent there.

“Everyone can understand why he has left because now he has the opportunity to be one of the key players for Everton now.

“I think he saw that was going to be the case (for Arsenal) last season when he played 30-plus games and scored 19 goals.

“Then all of a sudden this season that hasn’t been the case, but he can be a pivotal figure for us in the future.

“Hopefully he can go and perform as well as he did on Wednesday night.”

Walcott struck up an immediate partnership with right-back Seamus Coleman, playing his first match in 319 days after a double fracture of his leg.

The Republic of Ireland international played the full game and his performance was second only to Walcott’s, leaving Allardyce hailing his fortitude.

“I don’t go this far normally, but it was almost super-human,” said the Toffees boss.

“I’ve never seen anyone come back after 10 months out and perform for 90 minutes.

“He is an inspiration from that point of view. It can be more psychological rather than physical, but it hasn’t affected Seamus.

“Mentally he is very strong and I think it is great to have him back. Now we have to make sure we keep him fit.

“We have to have an assessment on where we do lie with playing him again – he will say he is fine, I know that for a fact.

“We don’t know if he will dip off because the euphoria of coming back can get you through a game, but the effect may come in two or three games’ time so we will have to monitor that because the last thing we want is to find he is getting re-injured.”