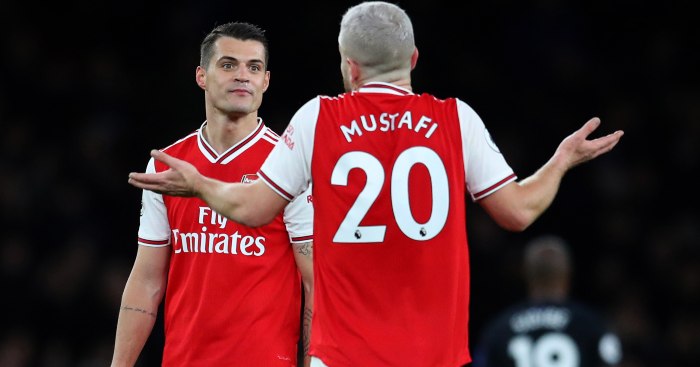 10) Dejan Lovren (Liverpool)
Admittedly, Lovren is the token Liverpool representative in this list. We’re well aware that come the New Year, there’ll be almost as many little Dejans being welcomed into the world on Merseyside’s maternity wards as there are Xherdans and Adrians.

But despite being among the group of players to end the Reds’ title drought, Lovren still provokes (at best) indifference among Liverpool supporters, not so much by his performances as Jurgen Klopp’s fourth-choice centre-back, but more for his comments and his frank bullishness.

But it’s not like he hasn’t been saying what most around Anfield have been thinking, even if it is only in recent weeks that they have allowed themselves to verbalise their giddy feelings without fear of having their pants pulled down.

9) Cesar Azpilicueta (Chelsea)
The Chelsea captain has been a magnificent servant to the Blues and when he finally departs Stamford Bridge, he will be best remembered for his startling consistency over 371 games to date.

But the feeling remains that Dave’s better days are behind him. The Spaniard’s reliability has been well utilised by Frank Lampard but in the full-back areas, Chelsea fans feel they have better specialist options available.

Particularly on the right. The vast majority of Azpilicueta’s appearances this term have been in the position many supporters would prefer to see Reece James. But in a young side, Lampard seems to take comfort from the captain’s presence.

8) Nicolas Otamendi (Manchester City)
Despite being one of the only two natural centre-backs at Man City – even Gareth Southgate was starting to think John Stones should be used further forward – Otamendi still doesn’t convince many City fans of his credentials.

From being labelled ‘the General’, Otamendi is now seen as something of a liability, no longer capable of performing at the level which earned him the nickname in the first place. Otamendi, a two-time Premier League title winner, has struggled with injuries as well as form in the absence of a competent stand-in.

The 32-year-old seems likely to move on this summer, leaving City even more short of centre-backs. His form hasn’t been what it was, but few in the City side – even those on the right side of 30 – can say they have matched their previous standards.

7) Serge Aurier (Tottenham)
Tottenham fans have probably forgotten what a decent right-back looks like. Not since Kieran Trippier left his mojo in Russia in the summer of 2018 has a Spurs right-back fitted the description. But they can still recognise when Aurier is on one.

There is always something happening around the former PSG full-back, which is not a desirable quality in a defender. Aurier’s marauding runs forward are a huge weapon in Spurs’ attack. In their defence, Aurier just acts like a weapon.

Since Daniel Levy did not lavish upon Jose Mourinho a new right-back in January, the Spurs boss will have to accept Aurier’s faults for now and attempt to curb his edges. But that doesn’t make supporters feel any more at ease when they see the Ivory Coast star thundering into another mistimed tackle or going hopelessly AWOL from Spurs’ shape.

6) Claudio Bravo (Manchester City)
The City keeper seems in recent years to have found his place at the Etihad – the bench. Because for his first year at City, Guardiola might as well have placed a Weeble on his goal-line.

City fans tried to stay patient with the Chile keeper imported from Barcelona but after six months, enough was enough. Bravo was given the sarcastic cheer treatment during an FA Cup tie against Huddersfield and even Pep reached the point where he’d had enough after nine goals were scored against City from 14 shots on target.

Still, had Bravo not been so woeful, Guardiola might not have gone looking for Ederson. And Bravo has done a better job as an occasional stand-in than a trusted No.1.

If Claudio Bravo was a dog… pic.twitter.com/vRssiOGV7Q

5) Granit Xhaka (Arsenal)
Mikel Arteta went well out of his way to fluff Xhaka’s ego after taking charge and the Switzerland midfielder responded by shelving his plans to leave for Hertha Berlin in January.

But Arsenal fans can’t pretend they recognised Xhaka’s quality quite like Arteta. The merciless stick they gave the £35million midfielder culminated in the Swiss snapping upon being hooked by Unai Emery, which led to him losing an armband few thought him fit to wear.

Arteta’s backing seems to have given Xhaka something of a clean slate with fans at the Emirates, but it remains a tense ceasefire on both sides.

“Jones, arguably the way he is looking, could be our best ever player. I think Jones may be one of the best players we have ever had, not matter where we play him. At 21 years of age, he is going to be a phenomenal player.”

Sir Alex Ferguson really didn’t do Jones any favours back in 2013. The former Blackburn youngster looked quite a prospect, but to go on record in predicting that Jones could achieve the kind of success that would see a (gurning) statue built at Old Trafford was setting the youngster up for a massive fall.

Of course, Jones has not been able to hit anything like those heights but the derision sent his way by some United supporters is a little weird. Injuries haven’t helped and the fact he pulls funny faces while blocking shots or challenging for headers makes him all too GIF-able. Presumably Virgil van Dijk always goes Blue Steel for the camera when he’s planting his noggin’ on the end of a 60-yard hoik?

And, of course, Jones will forever be remembered for that challenge on Olivier Giroud, which was actually a brilliant piece of improvised defending.

3) Kepa Arrizabalaga (Chelsea)
Chelsea fans haven’t had a proper scapegoat since Alvaro Morata and his face like a permanently slapped arse returned to Madrid. But another Spaniard seems to have filled the vacancy.

It’s not just swathes of Chelsea supporters who don’t rate Kepa; Frank Lampard isn’t keen either. After a number of warnings about his form, the Blues boss dropped the world’s most expensive goalkeeper three weeks ago and since then, reports have suggested he is trying to persuade the club to take a hit just to move Kepa on.

His performances have rarely been those expected from the game’s priciest stopper and his behaviour in the Carabao Cup final certainly didn’t help. Most supporters wanted Maurizio Sarri out but even those dissenters backed the manager over his insolent goalkeeper.

2) Jesse Lingard (Manchester United)
The Manchester United attacker failed to score or create a Premier League goal in 2019. There were 286 players who recorded an assist last year but Jesse Ellis Lingard was not one of them.

That was some fall from grace after the England attacker returned from the World Cup in 2018 as one of England’s brightest talents. But that spotlight did Lingard no favours and he did himself even fewer.

Launching a clothing line and other ventures in an effort to cash in on his brand would have been forgiven by supporters – some might even have doused themselves in JLingz cologne – had Lingard been doing the business on the pitch too. But no. He started the following season poorly and got worse.

Lingard has offered some mitigation for his form and he’s heeded the warning from Ole Gunnar Solskjaer about this being his last chance to knuckle down. But it’s almost too little too late for the 27-year-old. Twenty-seven. Maybe teaming up with Mino Raiola is a savvy move because when United finally give up on him, he might need a bloody good agent.

Wednesday night: "One more time and you're f*cking off."

1) Shkodran Mustafi (Arsenal)
The Arsenal defender was crowned the “king of blunders” by Emmanuel Petit and if there is one thing that has united Arsenal fans in recent years, it’s the dread of seeing the German’s name on the team sheet.

Ian Wright can usually find reason to be positive but not when it comes to Mustafi: “There’s nothing you can do to coach a defender of his experience now.” But the Gunners can’t just write off their £35million investment.

Mustafi is not immune to how he is perceived and he said earlier this season that the criticism had become “irrational”. Maybe he has a point since there’s hardly a defender at Arsenal who doesn’t scare the bejesus out of supporters. But Mustafi is undoubtedly the poster boy for Arsenal’s shambles of a defence.