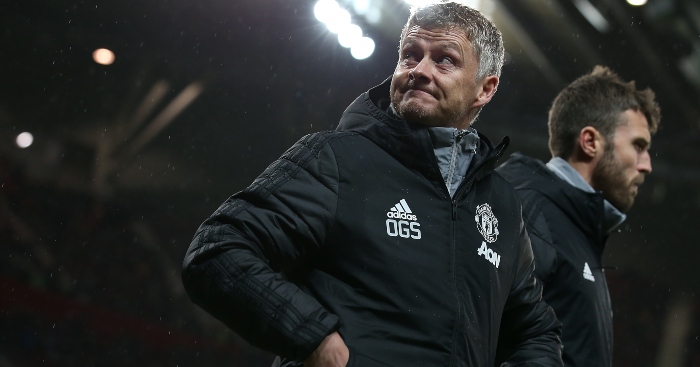 “Stuff like that almost insults me,” said Roy Keane in 2013 responding to effusive praise from Sir Alex Ferguson for “covering every blade of grass” in the 1999 Champions League semi-final against Juventus. “I get offended when people give quotes like that about me. It’s like praising the postman for delivering letters.”

That being said, Ole Gunnar Solskjaer’s reaction to Manchester United’s 3-3 draw with Sheffield United was the equivalent of giving your Royal Mail carrier a standing ovation for shoving a birthday card through your letterbox a week late and only after helping himself to the cash inside while trampling over your flowerbed.

“This is such a big stride forward for them, coming back from 2-0 down,” said Solskjaer after his United side had lost, won, then drawn in 95 minutes at Bramall Lane. We know managers in the modern game are only allowed to exude positivity – aside from Chris Wilder, funnily enough, and the Blades certainly seem sharper for his blunt honesty – but Solskjaer appeared genuinely thrilled at his Red Devils for not caving in to the Premier League new boys.

“I have no doubt about the attitude of these boys…they never give in,” continued Solskjaer, which isn’t entirely true. Sunday was the first time United have gained a point this season from a losing position. In every other game they have gone behind – against Newcastle, West Ham, Bournemouth and Crystal Palace – United have failed to claw back any points. And in at least three of those defeats, it looked very much like the towel had been chucked in.

Solskjaer immediately contradicted himself anyway. The mask slipped when he was asked why United had been so poor for the first three-quarters of the match. “Sheffield United looked like they wanted it more than us and believed in their game plan more than we did.”

There we have it. Solskjaer tried to bury the lede among a steaming pile of faux-positivity about ‘character’ but even he could not hide the bleeding obvious.

Perhaps we should not be too hard on Solskjaer for maintaining a front – he is just trying to keep his head above water while the squad pulls him under. Three other managers have lost their job for failing to satisfy the whims of the dressing-room; Solskjaer knows he has to keep the players sweet or he’ll be barged with the coldest of shoulders through the exit door, like Jose Mourinho and Louis van Gaal before him.

But this is not the manifesto Solskjaer campaigned on. United’s former striker earned his shot with endless talk of 1999 and restoring the standards which made the Red Devils so successful for so long. The game has moved on but the foundations for success are still built around graft, commitment, sacrifice and accountability.

Liverpool and Manchester City have demonstrated that; Sheffield United too. But too many of these United players expect to have their egos stroked just for turning up, even when they are shocked to discover the opposition has done likewise. More damningly, Solskjaer is willing to blow smoke up arses because his primary concern is maintaining his employment.

Not our strongest performance disappointed to let it slip at the end but we never gave up and we had the right mentality to bring it back. We dust ourselves off and focus on the next game! Thank you to the travelling fans for your support today! 🔴 pic.twitter.com/hcYl4hy3c9

While the status quo in the dressing room remains, it is hard to see United arresting their descent towards irrelevance. It was assumed that with the supporters on his side, Solskjaer was the ideal manager to sift out the deadwood, and though the scale of that particular job makes it impossible in a single summer, there are too many signs that he, like the players, are settling for standards which should never be accepted at Old Trafford.

What can be done about it? As the players know all too well, changing the manager is always the easiest reset option. Mauricio Pochettino’s availability will hang like a millstone around Solskjaer’s neck but the former Spurs boss would face exactly the same issues. United would need the ruthless Pochettino, the one whose ‘fit in or f*ck off’ mantra helped drag Spurs back towards the upper echelons of the domestic and European game; not the softer, more conciliatory version which played a role in Spurs’ struggles and his own demise.

FIFO rules apply in the United dressing-room too – but only to the manager. Solskjaer knows that would never have been accepted in 1999, or at any time up until 2013, but here he is facilitating it. Their problems certainly go higher up the chain of command at Old Trafford but United need a figurehead strong enough to stand up to mediocrity in the dressing-room as well enough players willing to subscribe to that ethos. Solskjaer insisted he is man for that job but he is fast running out of time to prove it.