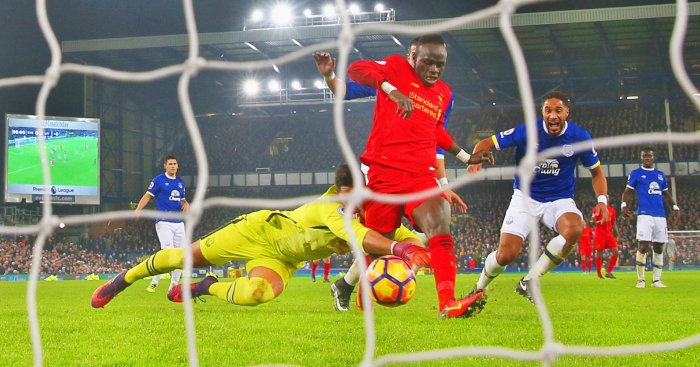 Game to watch – Arsenal vs Manchester City
You won’t catch me buying into the Daily Star’s claim that Arsene Wenger will base his decision of whether to stay or leave Arsenal on the result of Sunday’s match, but that only removes one layer of hyperbole from a game that needs no subplot.

Manchester City are hardly a physical team whose strengths are built around aerial threats and set pieces, but you do wonder whether Pep Guardiola watched Arsenal’s defeat against West Brom and considered that a little pragmatism may be in order.

Guardiola may also be licking his lips at the prospect of facing this Arsenal. Wenger’s team like to control the ball and the game in the opposition half, their possession football drawing defenders out and creating space, at least in theory. If City can invite that pressure and deal with it, the manager has a team capable of lightning quick transitions on the counter attack. Leroy Sane and Raheem Sterling – passed fit this week – can sit just inside their own half and look to break at pace. Hector Bellerin in particular will have to watch how far he commits up the pitch, while odds on Francis Coquelin and Granit Xhaka being booked are worth investigating.

That said, there is reason for Arsenal anticipation as well as apprehension. They have something of a hoodoo over Manchester City at the Emirates and even Highbury, having lost just once in the league since 1975 at home. More recently, they have lost just one of their last seven home and away against City in all competitions. Wenger might also point to a home league record of 12 dropped points in the last year, and only two defeats.

Wenger will hope that Mesut Ozil’s break will have done him good and that Alexis Sanchez is recuperated sufficiently from another trip to South America. Playing Sanchez from the left to target Fernandinho could bring Arsenal joy.

Whatever the result of the match, one thing certain with Arsenal games between now and May is that the journey will be intriguing. Take the phone off the hook, laugh in the face of the lighter, warmer late afternoons and pray to the great god Socca, for the Premier League is back in your life.

Player to watch – Adam Lallana’s replacement
It is the most pressing question on Jurgen Klopp’s agenda: Who is my Adam Lallana? The England midfielder has been ruled out for up to a month, leaving a gaping hole in Liverpool’s midfield.

Dejan Lovren could argue his case, but Lallana might just be Liverpool’s most important player. He has run further and sprinted more often than any of his teammates in every game in which he has started this season.

One option was to pick Emre Can in that role, but that was scuppered by the news that Jordan Henderson would also not make the game. An alternative is the lesser-spotted Marko Grujic, whose full debut against Derby in November alongside Henderson and Lucas Leiva prompted Klopp to label the 20-year-old as “outstanding”.

In truth, there is no easy fix. Liverpool’s bench against Manchester City consisted of a goalkeeper, left-back, right-back, centre-back, two strikers and Lucas, so nobody is exactly straining to raise their hand for the unenviable task of mirroring Lallana’s style. It’s time for someone to make themselves a Merseyside derby hero. Good luck avoiding the stitch.

Team to watch – Tottenham
Burnley, Swansea, Watford, Bournemouth, Crystal Palace. In the next four weeks, Tottenham face five of the bottom eight teams in the Premier League. Take 12 points or more from those five matches and, given the fixtures facing those around them, their place in next season’s Champions League will be close to a mathematical certainty. Slip up, and further punishment awaits in the three subsequent games against Arsenal (h), West Ham (a) and Manchester United (h).

Spurs beat Southampton without Harry Kane; theirs is far, far more than a one-man attack. But even in that victory there were signs that the players understand the magnitude of this Premier League 2016/17 final lap. In interviews players still talk of catching Chelsea, but their ability to keep their noses ahead of Arsenal and their other top four rivals is what they will be judged upon.

This Saturday, Mauricio Pochettino takes his team to Turf Moor, where Burnley have only lost to Arsenal and Manchester City since the opening day. One of those was achieved via a late, controversial goal and the other after falling 1-0 behind. Even Chelsea, supremely dominant over the last six months, could only manage a 1-1 draw. While Antonio Conte concluded that a draw was sufficient to maintain their title challenge, Pochettino will know that only a victory will do to consolidate second place.

Since December 2014, Tottenham have played 13 away games in all competitions in which Kane has not started. They have won three, drawn five and lost five, scoring only ten times. Now’s the time to address that dirge.

Get ready for the return of the Premier League with our new live score centre, which features pre-match previews, odds, stats and predictions, live galleries, audio updates, social streaming from clubs, journalists and trusted sources, plus reports and reaction.

Manager to watch – Slaven Bilic
It really does feel as if the vultures are circling. Peter Goldstein might be backing Slaven Bilic to stay on and maintain West Ham’s status as the Premier League’s weird entertainers, but he might want to email that opinion to Davids Gold and Sullivan. Rafael Benitez and David Wagner are just two managers to be linked with Bilic’s job this summer this week alone.

Sullivan has now twice spoken publicly of his disappointment in West Ham’s defensive incompetence in the last month, and the first time certainly didn’t produce any hint of a positive response. The second came after the 3-2 home defeat to Leicester, and left Bilic again cursing his team’s tendency for self-immolation.

If the manager expects to remain in charge beyond this summer, losing to Hull City would be an interesting way to begin. Next comes Arsenal, against whom West Ham conceded five times at home. They surely won’t be drawn back into the relegation battle like a gluttonous moth at an all-you-can-eat fire buffet, but stranger things have happened. Simone Zaza, for instance.

One-on-one battle to watch – Andy Carroll vs Harry Maguire
Because what could be sexier than No. 39 vs No. 46 in the latest England World Cup 2018 ladder?

In all seriousness, this weekend does mark the start of an interesting period for those looking to break into Gareth Southgate’s plans. June takes England to Glasgow and Paris to face Scotland and France before four more qualifiers by October 8. That date marks the last competitive international before the World Cup.

That fringe players and hopefuls only have 18 Premier League games left to break (or break back) into the England squad to impress Southgate in a competitive match before Russia should alarm those in serious danger of missing out. That more than half of those matches come between now and May demonstrates the crucial importance of this home straight. Carroll and Maguire are two of many looking to leave an impression.

Football League game to watch – Reading vs Leeds
Again, not a particularly difficult job given that there is only one televised Football League match on Saturday or Sunday. Derby do host QPR on Friday night, but you would be hard pushed to argue that 15th against 10th was more intriguing than fifth hosting fourth.

With eight and six points respectively separating Leeds and Reading from Fulham in seventh, both teams have the chance to effectively secure their place in the playoffs with seven games to go. Reading need a victory to address a run of four wins in their last ten league games, while Leeds followed up consecutive draws with a stirring win over Brighton last weekend.

Reading and Leeds are both relatively low-scoring teams – both have scored fewer times than Nottingham Forest in 20th, but Leeds at least have the third best defence in the division. I’ve watched Reading four times this season and can’t quite work out how they are so high up the table.

European game to watch – Napoli vs Juventus
I could have chosen one of any number on a superb weekend of European football. Monaco and Paris St Germain meet in the Coupe de la Ligue final, while the top two in Portugal face each other on Saturday and the top two in Netherlands do the same on Sunday.

Instead, I’m going for third vs first in Serie A on Sunday afternoon, with Juventus going to the Stadio San Paolo knowing a win would take them one large step closer to a sixth straight league title. While Massimo Allegri’s team have won every home league game this season, they have lost four times on the road, and Napoli are in the middle of a magnificent run. Maurizio Sarri’s team have dropped just seven points in their last 15 Serie A matches.

With Dries Mertens perhaps the form player in Europe and Gonzalo Higuain back in Naples for the first time since leaving for £75.3m last summer, you really are urged to tune in.

Where is Mike Dean this week?
He’s at Old Trafford, where the country’s most glamorous referee walks out in front of the biggest attendance of the weekend in the United Kingdom. This week, Dean will mostly be making weak topical gags to West Brom and Manchester United players, with the low point being sending off Chris Brunt just to enable a ‘Brexit’ punchline. When Brunt next receives a controversial red card, remember where you heard it first.