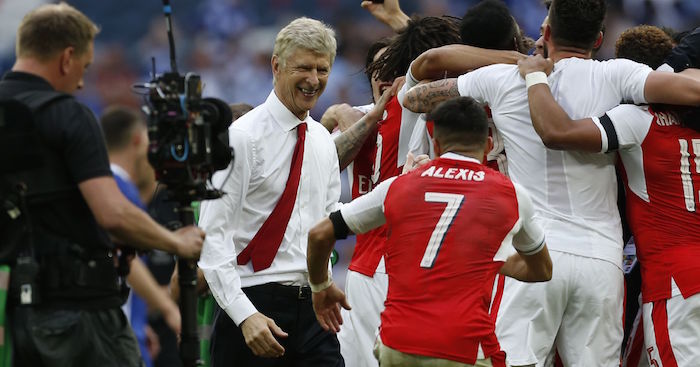 Game to watch – Arsenal v Chelsea
So the final act of last season is the curtain raiser to this campaign. Arsenal exacted a particular sort of revenge over Chelsea at Wembley in May, ensuring an otherwise disappointing year would not end without silverware, and propagating tiresome debates as to which of the top six, the champions aside, had the better season.

“It’s a friendly against Chelsea and that means it is not really a friendly,” said Arsene Wenger ahead of their July meeting in pre-season. “There’s always some pride at stake and London desire.” But even the Frenchman would be reluctant to draw too many conclusions from the outcome of this game.

Much as Jose Mourinho will refuse to admit it, the Community Shield final will not mean a great deal more than that friendly a month ago, which the champions comfortably won 3-0. It is an opportunity to take a closer look at new signings in a somewhat competitive environment, and a chance for one side to claim early bragging rights over another. But in terms of the grand picture of the upcoming season, it is little more than an accidental smudge hidden in the corner.

Not since the 2010/11 season has the winner of the Community Shield final subsequently lifted the Premier League trophy. The victors of the six finals since have finished as low as seventh, and it was only four years ago that Wigan, preparing for life back in League One this weekend, were beaten by David Moyes’ Manchester United at Wembley.

But this is still an intriguing fixture, particularly in the glare of their meeting in May. Nemanja Matic, Diego Costa and Eden Hazard all started that game, but will be unavailable for one reason or another on Sunday. Alexis Sanchez could join them on the sidelines, having only recently returned to training, while Aaron Ramsey picked up a reported muscular injury on Thursday.

Arsenal have continued with a three-man defence so far this summer, matching Chelsea’s vaunted system. Fringe players such as Alex Iwobi, Reiss Nelson and Michy Batshuayi have impressed thus far, and could be rewarded with prominent roles at Wembley.

Two club-record signings will be on show in Alexandre Lacazette and Alvaro Morata. Defensive additions Antonio Rudiger and Sead Kolasinac might feature. The sun will (probably not) be shining. Lessons will (absolutely not) be learned. Good times will be had. But more importantly, football, even in the loosest sense, is very much back.

Player to watch – Alexis Sanchez
Not since Rachel got off the plane or Gene Simmons tried to trademark his ‘devil horns’ hand gesture has a kiss generated so much interest. Alexis Sanchez needs little help in ensuring his name hits the headlines, but a quick peck of the Arsenal badge on his return to training sent outlets into delirium on Thursday.

Arsene Wenger stated yet again this week that the Chilean would not leave Arsenal this summer, and there really is no reason to doubt the Frenchman in his convictions. He is willing to lose an elite player for free next summer if the alternative is to strengthen a rival 12 months earlier than is necessary.

Even leaving his playing future aside, Sanchez has had quite the summer. The 28-year-old played every game for Chile in their journey to the Confederations Cup final, and has recently suffered with an illness. But he is back, “he is sharp”, and “looks like he has never been away”, according to Wenger.

Whether that means a starting role on Sunday is uncertain, but regardless of Sanchez’s wishes to leave the club, he is anything but a ‘temperamental malcontent‘. He lives to play football, and will do so in a more impressive fashion than most if selected.

The Gunners might only have 12 more months of Sanchez, and the countdown starts now. Alexandre Lacazette and Mesut Ozil are fine supporting actors in this production, but all eyes will be on the main protagonist.

Team to watch – Sunderland
Conventional wisdom has it that relegation can help a team. It forces them to address a number of issues, from wage structure to expectations, player recruitment to leadership. Suffering the ignominy of the drop can be a blessing in disguise, a chance to recover and refresh.

If any club were ever perfectly placed to hold that myth up as truth, it is Sunderland. The Black Cats have sleepwalked through all but the final two months of their past four Premier League seasons, the only difference being that they subsequently used the wardrobe as a toilet before falling down the stairs last season instead of just bumping into a door.

This was their chance to conduct a root-and-branch review, to weed out any and every existing issue, and to start all over again. David Moyes was replaced by Championship specialist Simon Grayson, Football League stalwarts James Vaughan and Lewis Grabban arrived, and a number of players on high wages departed.

Then Darron Gibson admitted he “might be off my face” as he ran down individual members of the squad, branding them “s**t” and stating that they “don’t give a f**k”.

Sunderland face Derby in the first game of the season on Friday evening. If Gibson doesn’t start, we riot.

“I’m not frustrated. I’m just desperate to do well, but I need the tools to be able to do that. If I get the tools I’ll do that, if I don’t then it’s going to be difficult.”

Harry Redknapp, fresh from trying to sign any free agent with Premier League experience over the age of 36, was preaching caution over Birmingham’s season. The 70-year-old accepted the permanent manager’s role at St Andrew’s in May, having guided the Blues to Championship survival. He wasted little time in moving his own furniture in; he quickly appointed Kevin Bond as his assistant.

The club have brought in four players so far this summer, and whether Redknapp’s claim that he needs more “tools” is an admission that he did try and sign John Terry is not for anyone else to say. But the former Tottenham manager has almost no time to integrate any new faces before the journey to Ipswich on Saturday.

Which leaves Redknapp with one option: Coach the players already at your disposal. It doesn’t bear thinking about.

Football has sent itself into its annual moral quandary tailspin with the revelations over Neymar’s move to PSG, but one only has to look as far as England’s second tier to see the effect money is having on the sport. In the summer of 2012, the costliest Championship signing ever was £8m Jordan Rhodes; that figure has since been beaten on 14 separate occasions since, with £15m Neves and £14m Assombalonga the current top two.

As such, the demand to produce immediately is almost overwhelming. Neves and Assombalonga would be best advised to hit the ground threatening to break land speed records, never mind just running.

Middlesbrough are the favourites for promotion, while Wolves are fifth. There is no better time to lay down a marker than early August.

Football League game to watch – Crewe v Mansfield
Welcome to the anti-Tottenham. League Two side Mansfield Town have signed 13 players so far this summer, and have had a sizeable offer accepted for a League One striker this past week. “I need to be sure I get supported to build a promotion squad,” manager Steve Evans said in May. Message received.

The Stags finished 12th in the fourth tier last season, but are prime candidates for a title charge. David Mirfin, Paul Anderson, Will Atkinson and Jacob Mellis are among the long list of players to have arrived at Field Mill, and with Evans and his nine career promotions at the helm, there is a reason they are so feared.

Crewe, for their part, are perhaps in for a less memorable season. They placed 17th last campaign, and with former Mansfield defender David Artell in charge, are aiming for a more modest mid-table finish. But in Jordan Bowery, Chris Dagnall and new signing Chris Porter, they have a forward line capable of punishing any defence.

European game to watch – PSG v Amiens
Back on May 28, PSG chairman Nasser al-Khelaifi insisted that “there will be changes”. It is not often a season can be described as a disappointment with three more pieces of silverware further cramping a burgeoning trophy cabinet, but such is the demand for success in Paris.

“We are going to change some things moving forward but this is not the time to talk about that,” al-Khelaifi would add, a further acceptance that finishing as runners-up in Ligue Un, coupled with an embarrassing Champions League exit, represented only failure.

The reaction has been simple. Dani Alves has arrived on a free transfer from Juventus, filling the important role of experienced, trophy-laden Brazilian full-back after the departure of Maxwell. Yuri Berchiche has also joined from Real Sociedad, but will be little more than back-up to Layvin Kurzawa.

So when Unai Emery’s side begin their quest to reclaim the Ligue Un title at home to Amiens on Sunday, there will be few new names to learn. The familiar faces of Marco Verratti, Blaise Matuidi, Angel di Maria, Julian Draxler, Lucas Moura and Edinson Cavani will feature, hungrier than ever to remove Monaco from their throne.

Amiens will be the visitors at the Parc des Princes on Sunday. The newly-promoted side had the second-best defensive record in Ligue 2 last season; if only PSG had a new striker to rely upon.