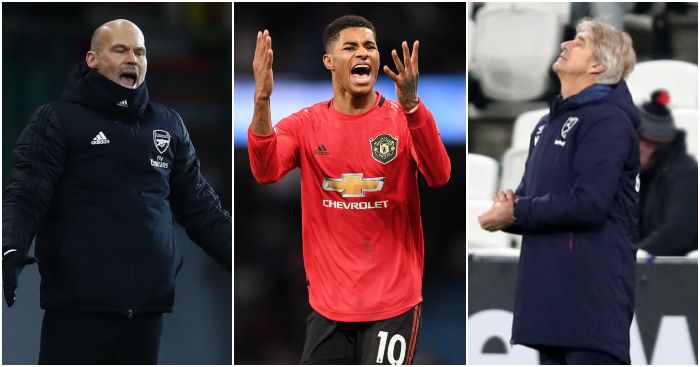 Game to watch – Arsenal vs Manchester City
The gossip about Freddie Ljungberg is not flattering. Sources describe him as passive and out of his depth and, given that he has no head coaching experience whatsoever, that’s hardly surprising.

Whatever faith is placed in idle, media room chit-chat is secondary, though. What matters is that Arsenal’s performances seem to confirm those suspicions. There’s been no bounce. Even the win at West Ham was discouraging in its way, such was the impotence of the football prior to the goals.

All in all, it’s hardly a good time to be facing a Manchester City side who have endured an awful lot of criticism since last weekend’s derby defeat.

What’s wrong with them? Who knows, but it’s easy to see a vague lack of tension in their play, particularly in the attacking phases which used to be so well-oiled and precise. The 4-1 thumping handed to Dinamo Zagreb on Wednesday corrected the trend to an extent, but they could really do with a muscular performance in the Premier League. One of those irresistible displays during which Raheem Sterling keeps wriggling into penalty-box space, perhaps, with the Silvas scheming, and Kevin De Bruyne posing questions without answers.

It feels as if there’s quite a lot at stake, even if Arsenal mightn’t be finishing in the top four and Manchester City almost certainly won’t be winning the title. A heavy loss would clearly accelerate the plans to replace Unai Emery properly – or should do at least – while a victory for City could re-inflate their ego ahead of the League Cup tie with Oxford and a very big game with Leicester next weekend.

Manager to watch – Manuel Pellegrini
Southampton against West Ham is absolutely not a game to watch, but it will most likely decide Pellegrini’s future. His employers are not among the Premier League’s most reactionary, but lose here and the rest of the weekend could be spent in the relegation zone.

Let’s be fair: Pellegrini isn’t the problem at West Ham. He’s one of them, but he’s not the headline issue. Rather it’s the witlessness of the club’s ambition and the way, season after season, money is thrown at the wall in pursuit of quick advancement and the opportunity for the stakeholders to gloat on Twitter or in their tabloid columns.

The trouble for Pellegrini – and for sporting director Mario Husillos – is that £206m has been spent over the past three years. So while they’ve only been in place for two of those and the fans are more angry with those above them, the ownership can reasonably claim to have offered full support and generous funding.

And it’s very hard to argue that they’re getting value for that money, whatever ideological concerns are caveated into this discussion. Sebastien Haller has not been a success, Pablo Fornals has so far been a dreadful failure, and even last season’s positive additions – Issa Diop, Felipe Anderson – have badly regressed.

Perhaps the year’s most descriptive moment was the loss to Tottenham. Performing in that game, particularly at home, is supposed to be a West Ham staple. What was shocking, then, was just how easily they were slapped away – and not even by a team in good health, but one which had endured significant trauma following the departure of Mauricio Pochettino and was very low on confidence. The game may have finished with a respectable scoreline, but Pellegrini’s players – his under-motivated, under-invested, chaotic side – took an absolute hammering.

Maybe that illustrates the problem. If West Ham are going to continue down this road and keep pursuing these big budget players, then their head coach has to be able to shape that talent into some kind of coherent group. On the evidence of the dressing-room leaks we’ve heard, the performances we’ve witnessed and – of course – the league table, Pellegrini isn’t up to that task.

Team of the watch – Manchester United
United have been authors of an unflattering pattern this season. Bad results have always followed their better moments. More precisely, credibility-building wins against competitive sides have, without exception, quickly been undermined by dismal losses or insipid performances.

The opening day 4-0 over Chelsea was a prelude to a draw with Wolves, a home loss to Palace and that awful 1-1 with ten-man Southampton. The impressive victory over Leicester led them into a six-game winless run, including losses to West Ham and Newcastle. Most recently, that hugely encouraging League Cup win over Chelsea was quickly contextualised by defeat to a Bournemouth team who haven’t won since.

It’s how it has generally gone.

Lots of bluster and bullshit from the usual corners of the press.

Ole’s at the wheel!

…and then the crushing reality of a 90 minutes without redeeming feature.

So what next? After a quick six points from Tottenham and Manchester City, what can they mine from a humdrum home game against Duncan Ferguson’s Everton? Wouldn’t it be typical it they lost? If, after knocking over two of the most celebrated head coaches of the modern era, Solskjaer was upended by a managerial novice.

Player to watch – Jan Vertonghen
A reluctant full-back at the best of times, Vertonghen probably won’t enjoy his trip to Molineux on Sunday. Jose Mourinho will ask Serge Aurier to provide most of the team’s drive from the other side of the pitch, but the more static and stable Vertonghen will still be one-to-one with Adama Traore.

A newly improved Adama Traore, too, who is still the quickest player in the division, but who now comes with a more refined final ball and a slightly steadier pulse when making decisions. Midfield will be important on Sunday, but how Vertonghen’s 32-year-old legs hold up will probably go some way to deciding this game, as will the performance of whichever midfielder is tasked with protecting him.

Football League game to watch – Birmingham vs West Brom
Birmingham fell to a controversial defeat at home to QPR on Wednesday night – find Bright Osayi-Samuel’s goal if you haven’t already seen it – but they’re still greatly improved under Pep Clotet.

West Brom also had an underwhelming time in midweek, needing a Charlie Austin goal to take a point from Wigan. Still, Slaven Bilic’s side are good value and, individually, are probably the most talented outside the Premier League. Matheus Pereira is incredibly entertaining to watch, Romaine Sawyers is having an outstanding season and, in full-back Nathan Ferguson, Bilic has a player other clubs should be falling over themselves to sign in the summer.

West Brom remain neck and neck with Marcelo Bielsa’s Leeds at the top of the table, so this Black Country derby is another crucial battle in that private war.

European game to watch – St Etienne vs PSG
Claude Puel was appointed by St Etienne back in early October, when they were 19th in Ligue Un having won just twice all season. His effect was immediate, winning five of his first six league games, including a derby victory over Lyon which did for Sylvinho.

The club’s away form has tailed off lately, with St Etienne suffering back-to-back defeats to Rennes and Reims, but they’re unbeaten at home, now sitting just two points off the European places, and have conceded only three times at the Stade Geoffroy-Guichard since the end of September.

Puel will likely be fielding a few Premier League old boys, too. Yann M’Vila and Mathieu Debuchy should both start, while future Arsenal centre-half William Saliba is worth a watch as, too, is young defender Harold Moukoudi, who was actually drawing interest from a couple of English clubs over the summer.

Everyone enjoys watching PSG lose, or should do, so here’s hoping St Etienne do Andre Villas-Boas’s resurgent Marseille (second place, five points back) a favour in this Sunday 8pm (BT Sport) game.