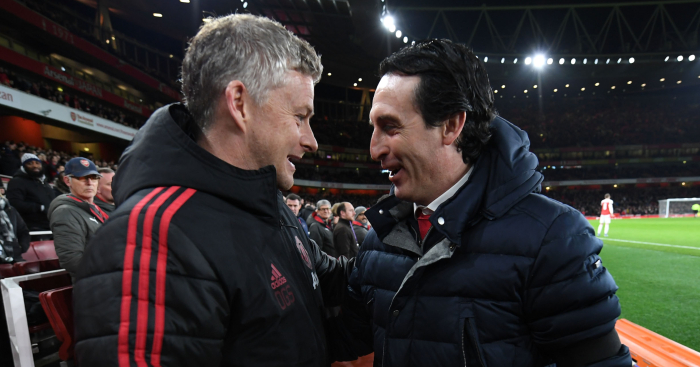 Game to watch – Arsenal v Manchester United
The gap is one point, but the difference has been laid bare over the past 48 hours. Manchester United and Arsenal are on a similar journey with the same planned end destination, but their progress has varied.

This week has already neatly summed up the differences between the two. United beat seven-time French champions PSG 3-1 away from home in the Champions League on Wednesday; Arsenal lost 3-1 to 2008 Intertoto Cup joint winners Rennes away from home in the Europa League on Thursday. Thirty-four points and nine places separate those two teams in Ligue Un, yet it was the champions and runaway leaders who crumbled against one of England’s sleeping giants, while a mid-table side eased past one still slipping in and out of its slumber.

Unai Emery referenced the effect of Sokratis’ red card in France, but acknowledged that “we need to change our performances”. Arsenal’s one-man disadvantage made a recovery from a one-goal disadvantage difficult against an impressive Rennes side. But then Mr. Hyde took over, pointed the gun squarely at the Gunners’ feet and conceded an unforgivable third goal to leave a second-leg mountain to climb.

United are only just packing their equipment away after scaling a historically daunting summit. There is no possible way of downplaying the achievement that was not only beating PSG, but knocking them out with such an under-strength side against all odds.

As with Arsenal a day later, 2-1 was a scoreline that did no real damage. This side could have held its head high after coming so close to accomplishing the unfathomable, only to fall ever so slightly short. There was no shame, and the wounds that were opened up at Old Trafford in the first leg were healed by an improved performance and result. It was more about pride than progression.

Yet they did not relent, and United will be in a European quarter-final draw while Arsenal are far from certain of emulating them in a lesser competition. The midweek results made Ole Gunnar Solskjaer’s appointment a formality, while only weakening Emery’s case.

It will not be quite so straightforward on Sunday, when fifth place hosts fourth at the Emirates. Arsenal will be desperate to foster the togetherness generated by last week’s draw with Tottenham in a game they will feel they should have won. Their last home league defeat to a fellow Big Six side was on the opening day of the season, such is their new-found resilience.

But that rather obfuscates the point, with United having won at the Emirates just two months ago. That comprehensive FA Cup victory has formed part of a winning run of nine consecutive away games, a new club record. After Wednesday, they will be desperately confident of reaching double figures.

Yet Wednesday’s result, and the unexpected prolonging of a Champions League campaign into March and April, could distract from their Premier League season. Solskjaer has worked wonders with his squad thus far but competing on three fronts brings the sort of risk that rivals will look to exploit.

The only question is whether Arsenal are capable of taking full advantage before they hand it back to an opponent dangerously high in confidence. The gap is just one point, but the difference between them and United could not be more stark.

Player to watch – Mohamed Salah
Not since February 2017 has Mohamed Salah been on a worse run in front of goal at club level. The Egyptian went eight games without scoring for Roma in all competitions over two years ago, a spell that was interrupted by his participation at the Africa Cup of Nations.

The 26-year-old has not gone longer than four games without a goal for his club in the subsequent 25 months, but stands on an unwanted precipice on Sunday. Failure to score against Bayern Munich, Manchester United, Watford and Everton would pale in comparison if last season’s Golden Boot winner cannot breach Burnley’s defences at home.

The Clarets have had their post-Joe Hart veneer of invincibility shattered by consecutive defeats to Newcastle and Crystal Palace, dragging them back into a relegation battle they had seemingly distanced themselves from. A trip to Liverpool is the last thing a struggling team needs.

“No-one is expecting anything of anyone this season, certainly not us going there,” said Sean Dyche of the prospect of visiting Anfield earlier this week.

The point stands. Since a 2-1 defeat to Crystal Palace in April 2017, Liverpool have played 35 Premier League home games, winning 25, drawing ten and scoring 88 goals. Salah alone has scored 28 and assisted 12 of them.

There is no better opponent against which to find his form, and no better time to do it. Liverpool need their Egyptian king back to help reclaim their throne.

“He always says to us ‘if one of you wants to be number one…’ It’s not my ambition. As soon as one of the staff starts to think they want to be number one, for me, they have to leave the team. You know why? Because their energy is somewhere else.”

As reluctant as he is to occupy the spotlight, Jesus Perez might find himself thrust into it on Saturday. As things stand, Tottenham will travel to Southampton on Saturday with Mauricio Pochettino in line to serve the first game of a two-match ban.

Popular assistant manager Perez will be asked to take up quite the mantle, even just temporarily. The 1-0 victory over Borussia Dortmund on Tuesday has helped Tottenham claw back much of the momentum that was lost during a three-game winless Premier League run that culminated with last weekend’s painfully close north London derby.

Harry Kane, Hugo Lloris and Jan Vertonghen’s late intervention in that game kept Tottenham’s head above the top-four parapet. Manchester United are now just three points behind but face Arsenal – one point further back – on Sunday. With Chelsea five points off third place with a game in hand, Pochettino’s side have considerably less room to manoeuvre.

Be it Batman or Robin – hero or sidekick – on the touchline at St Mary’s, Tottenham know their objective: a first Premier League win in almost a month is a must.

Team to watch – Manchester City
For the first time in 91 days, Manchester City will go into a match top of the Premier League table with no ifs, buts or strings attached. There is no talk of games in hand or points on the board; the leaders host Watford having finally and irrefutably overhauled Liverpool in this title race.

The challenge now is to set the pace instead of keeping it. Both pose different questions that City have proven adept at answering before, but they cannot afford to even glance behind them after edging ahead. That their advantage is just one point after a run of 16 wins in 17 games demonstrates just how slim the margins are.

Liverpool will not relent. They have more home games left (five) than City (four), who must still travel to fourth-placed Manchester United while Jurgen Klopp’s four remaining away assignments are each against members of the current bottom seven. There are twists and turns to come in the final nine fixtures.

But City will not allow themselves to look that far ahead. Saturday’s visit of eighth-placed Watford is the sort of banana skin Liverpool navigated with ease recently, beating the Hornets 5-0 at home in possibly their most impressive performance of the season. City have raised every bar Liverpool have set this season, and will aim to do so again.

Football League game to watch – Blackpool v Southend
If you want a game you can actually watch, be sure to tune into Sky Sports at Sunday lunchtime to preside over John Terry’s Aston Villa’s visit to bitter rivals Birmingham.

But a more sentimental eye should be cast over Blackpool, who could welcome a capacity crowd to Bloomfield Road for the first time in years on Saturday. Southend won’t know what hit them.

A boycott that ostensibly began on the final day of the 2014/15 season will finally come to an emotional end. The Oyston family’s tyrannical reign is over; the war is won.

It has been quite the journey. The club’s average home attendance has crashed from 10,928 in their final Championship season to just 3,912 so far this campaign, which is actually an increase on the 3,456 they drew in League Two. And successive relegations only go so far to explaining those dwindling numbers, with fans rallying against an oppressive regime off the pitch rather than declining performances on it.

More than 14,000 tickets had been sold to home fans by 2pm on Thursday for what is the club’s first game since the last trace of the Oystons was removed. Blackpool supporters have their club back, and this day will belong to them.

European game to watch – Fiorentina v Lazio
You know what? It’s really not a vintage weekend for European football fixtures. So watch Fiorentina host Lazio in a game that would have been bloody brilliant back in the 1990s.