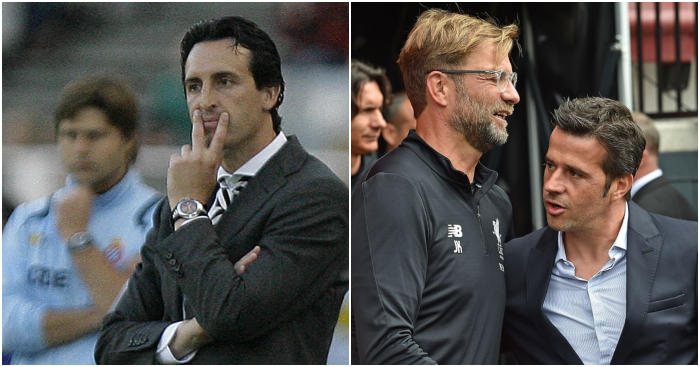 Game to watch – Arsenal v Tottenham
Ladies and gentlemen: store your form books somewhere safe and out of reach, and barricade every window in your property. There is a derby on the horizon.

The first rule of any match between two bitter rivals is the defenestration of any written or printed works pertaining to the recent results of either side. Football folklore tells us that the form book goes out of the window whenever there is a derby.

When it comes to north London derbies, one would be advised to actually read the contents of the form book before carelessly disposing of it. So with Tottenham having won their last six in all competitions – while Arsenal are unbeaten in 18 – what can we expect on Sunday?

These are two sides as close as they have been in terms of quality for some time. Three points separate them in the Premier League, where their goal difference is identical. Arsenal score more, but Tottenham concede less.

Both teams have reached a level of uncharacteristic consistency this season. Tottenham had hardly played well for long periods until swatting Chelsea aside, yet they are within touch of the Premier League’s dominant top two. Arsenal are yet to lead a league game at half-time and still look far from convincing, but have not lost since August.

Something will have to give on Sunday. Or perhaps more likely is that nothing does. A side that has clicked in attack but still looks vulnerable in defence hosts one whose rearguard looks stronger than ever, with a forward line playing at nowhere near their full potential. Their respective strengths and weaknesses mesh too well together to pick a favourite.

There isn’t even much to read into Unai Emery and Mauricio Pochettino’s previous meetings. The Tottenham manager won the first and last of their seven games against each other in Spain, with Arsenal’s head coach claiming four wins in the other five matches. Much like with their current clubs, no-one holds a particular advantage here.

And that is what makes this game so intriguing. There should be no laborious talk of a power shift, for both are looking stronger than ever. There is no need to manufacture further ill feeling for motivation, for neither are short of either incentive or self-belief. This is an excellent Tottenham against an ever-improving Arsenal, finally back on something approaching level footing.

Other game to watch – Liverpool v Everton
Sorry, but on the rare occasion that Sky Sports actually deliver a list of fixtures befitting the Super Sunday moniker, the least we can do is keep an eye on as many matches as possible.

This time around, Everton won’t mind being in full view. They will not be favourites against a Liverpool side stuttering in Europe but sauntering in the Premier League. They have not won at Anfield since 1999, and their last win against the Reds in any competition was inflicted by David Moyes over Roy Hodgson. Both clubs have been transformed in the eight years since.

But Everton do not approach this game with trepidation. Marco Silva’s side will greet their more illustrious opponents as rivals, if not equals – as a test to relish, not fear. They will try and land at least a few body shots on Liverpool instead of simply absorbing as much punishment as possible.

The question is actually whether Liverpool are capable of doling out said punishment or not. This is not the side that petrified Sam Allardyce into a defensive stupor last season, nor one that has reached any sort of consistency in attack. The Reds have scored one goal or less in nine of 19 games this season (47%); they did so in just 32.1% of their fixtures last campaign.

This is no free hit for Everton. Their fans will and should expect them to be competitive. But they will be under considerably less pressure than a side who might start placing all their eggs in the basket marked ‘Premier League’ rather sooner than they expected. After that performance in Paris, Liverpool need to respond.

Player to watch – N’Golo Kante
No player has dominated the Premier League quite like N’Golo Kante since he moved to these shores three years ago. He has played a crucial part in two different title-winning sides in three seasons, losing just 15 times in 119 appearances. Leicester’s unheralded hero has become the highest-paid player in Chelsea history.

Most Premier League points since the start of the 2015/16 season:

Yet the biggest threat to his command has come from an unlikely source. Maurizio Sarri did not hold back in his assessment of the Frenchman earlier this week, laying much of the blame for the defeat to Tottenham at his diminutive door. “Kante tried to solve the match on Saturday, but in the wrong way,” he said. “He tried to be too attacking.”

The wonderful old dog is understandably chasing its own tail trying to learn new tricks. Kante is making fewer tackles and interceptions than ever before, but his shots, chance creation and touches in the opposition box are all at record personal levels. An excellent defensive player is doing a competent job in attack, but it is like asking a waiter to be head chef: they will get the basics right, and inevitably struggle with more advanced, specific skills.

In an ordinary midfield, that would be fine. But Chelsea have Jorginho, Ross Barkley, Mateo Kovacic, Cesc Fabregas, Ruben Loftus-Cheek and even a £35m reserve in Danny Drinkwater. As harsh as it seems, and as disagreeable is it might be, if Kante doesn’t fit his manager’s template then he may soon lose his place. He must impress his manager against Fulham.

Manager to watch – Jose Mourinho
It is not often that Jose Mourinho is the most settled of the two managers in any given dugout. Tuesday pitted him against Gerardo Seoane, a coach 16 points ahead of his closest challenger in his domestic league. He faced Roy Hodgson on Saturday, a manager who has stored enough goodwill to avoid difficult questions for now. Before that, Manchester United’s six previous fixtures saw him take on Pep Guardiola, Massimiliano Allegri, Eddie Howe, Marco Silva and Maurizio Sarri. There has been no opportunity for mutual sympathy.

So when Mark Hughes welcomes the Portuguese to St Mary’s on Saturday, it will be an unfamiliar feeling. “It’s a difficult job that we have,” said the Welshman when asked about his colleague in August, offering an olive branch after telling him to “f*** off” last September. “We’re the figurehead of the club in terms of football and we’re there to be questioned.”

Some more so than others. Hughes is under immense pressure to avoid becoming the first Premier League manager ever to be sacked by two different clubs in one calendar year, and is in desperate need of a victory after Southampton slipped into the relegation zone last week. The only problem? Saints have won just one of their last 17 home league games. Oh, and Arsene Wenger is the only manager to beat Hughes more times (16) than Mourinho (11).

Thus United’s boss will feel a different kind of pressure this weekend. His side have been overwhelming favourites before, but rarely can Mourinho ever consider himself to be the safer of two managers. It will be interesting to see how he reacts.

After a week of unnecessary back-and-forth over an innocuous reaction to a bad miss, the focus will mercifully be on the football once again. United, seventh and seven points behind fourth place, cannot afford any more slip-ups. Mourinho must make the absolute most of a rare and brief period out of the spotlight.

“The teams who are in the second half of the table don’t get that many points against teams in the top half, especially at the moment because they are going to be sweeping everything in front of them, we’re aware of that.”

Roy Hodgson was speaking after watching his Crystal Palace side lose to Chelsea earlier this month. It was the third difficult game in a quite horrible run of fixtures: Palace have drawn two and lost three of their last five matches, each of which have come against members of the top seven (Everton, Arsenal, Chelsea, Tottenham, Manchester United).

Palace’s bid for survival will not be built on a platform of giant-killings, but on quietly executing those around them. Their next four games are against Burnley, Brighton, West Ham and Leicester, while a Boxing Day home game against Cardiff follows a daunting trip to Manchester City. The draw against United on Saturday was a bonus point; this is their bread and butter.

It was much the same last season. In a table comprised solely of clubs who finished in the bottom half, Palace would have finished top with 29 points from 18 games. This David prides itself on being able to topple its various namesakes instead of trying to take on Goliaths.

Burnley are the only team to take as few points in their last six league games (2 each), and fate dictates that they meet at Selhurst Park on Saturday. If ever there was a time to get your first home win of the season in any competition, it is now.

Football League game to watch – Sheffield United v Leeds
With 41.% of the Championship season gone, the top five are separated by just three points. Two members of that quintet face off at Saturday lunchtime, with second-placed Leeds taking on Sheffield United in fifth.

European game to watch – Besiktas v Galatasaray
Might be a bit dangerous if you actually go, mind.