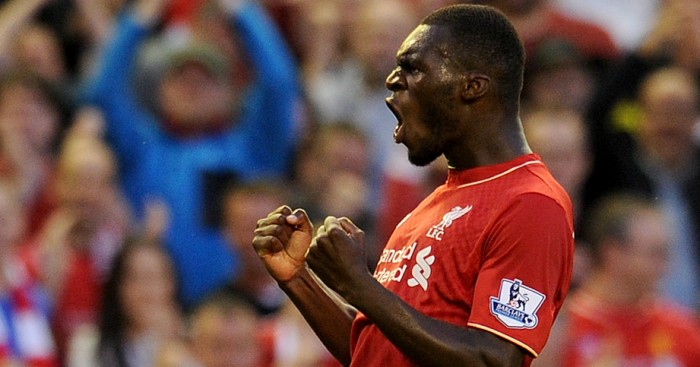 There is a suspicion that Brendan Rodgers’ short-term future relies on Christian Benteke firing. Big Weekend’s back, with words on Falcao, Rooney, Ranieri and Sherwood…

If you sleep on Friday night then you’re not excited enough.

Wayne Rooney
One of the consequences of Manchester United finally fixing their central midfield after five years of neglect is that it caused the eye to wander to other areas of the squad. It turned out those weren’t all in rude health. Central defence and the goalkeeping situation needs work, but the main concern should be on United’s strikers. Or should that be striker?

This really is a massive season for Wayne Rooney. With Javier Hernandez unwanted, Memphis Depay untested (and best out wide) and James Wilson unproven, the responsibility falls on Rooney to once again become United’s top scorer. Pedro may provide the pace that Louis van Gaal has demanded so publicly, but he won’t play through the middle.

“I have no doubts in myself,” was Rooney’s reaction to the considerable faith shown in him by Van Gaal. “I have no doubts that I can do it again and I am ready to take on that mantle again and be the one who gets the goals for this team.”

United fans will hope that such confidence is not misplaced. Rooney’s form will be the crucial factor in deciding which position between fifth (yeah, I went there) and first United finish in. Time to score 18 or more league goals in a season for only the third time in his career.

“I don’t change too much, but just give my Italian, tactical way,” Ranieri said last month. “First of all, our fans can expect our players to fight. I spoke with the players and told them I want all my players to be fighters. The team had not such a good period around November and December last year, then the last period was outstanding. I want to see that period throughout the season.”

Grand intentions are positive, but not if they leave a vacuous reality. Now it’s time for Ranieri to prove us all wrong.

Christian Benteke
“Obviously I’ve heard and I’ve seen stuff about the style, ‘he won’t fit the style of how we play’ – I think he’ll only complement it and help us,” said Rodgers after Benteke had arrived from Aston Villa. “He’s a big guy but he’s got the attributes that I like in terms of pace and movement and he gets goals, he gets all types of goals. He’s great in the air, strong, he can hold the game up, he can play on the counter-attack, he can play whenever the team is deep because he can hold the ball up with his physical strength.”

It will be fascinating to see how Liverpool’s style adapts to Benteke’s arrival ,and there will be those sent to Stoke to count the crosses into the box on Sunday afternoon.

The roles of Roberto Firmino and James Milner may also be cemented. Having suffered from a lack of cohesion in the early stages of last season, there is a similar feeling of unfamiliarity within Liverpool’s squad.

Call it a lazy simplification if you like, but there is a distinct feeling that the short-term future of Brendan Rodgers rests at the feet and head of Christian Benteke. Having spent £32.5m on a striker, patience is now a non-entity – this needs to work now.

And so to the Britannia Stadium, the stage of last season’s farcical nadir. This season it must be where progress begins.

Everton’s thin squad
I opened myself up to the vitriol of Everton’s social media army with this piece, in which I suggested that selling John Stones would be a good idea. My point was that such funds would allow Roberto Martinez to add some much-needed back up to a paper-thin squad. It may make you sob with sadness, Everton fans, but being a selling club is an admission of reality not weakness.

On Wednesday, Martinez played down reports that Romelu Lukaku was struggling for fitness. “Rom has obviously been playing a lot of minutes and it was important for him to get some sort of action,” he said. “After the first 25 minutes, he was feeling his legs were a little bit too heavy and we didn’t want to take any risks. It’s not a problem at all.”

Less than 24 hours later, that had changed. “He hasn’t done much with the group,” Martinez admitted. “The next 48 hours are making sure he doesn’t get a bad reaction and we are going to be very careful with him before the weekend. Rom needs extra assessment over the next 48 hours to see what his role is going to be at the weekend.”

Without allowing my heady love for Lukaku to cloud judgement, this is exactly what I’m talking about. Martinez’s description of the striker’s workload as “a lot of minutes” is an incredible understatement. Including friendlies, he’s played 136 matches since the start of 2013. He’s 22.

Forced to work his best players into the ground due the lack of options, Martinez is perennially risking soft tissue injuries such as the one suffered by Lukaku. Fans may not want to sell Stones (and I fully understand their bitterness to do so), but he would allow for better reserve central striker option than Arouna Kone. He’s scored 30 league goals since January 2007.

“He’s [Radamel Falcao] very good for the situation,’ the Portuguese boss said. ‘He’s played in the America Cup (Copa America), been on holiday and has had only one week of training – not the three that the others have had. Today I took him off in his best moment. It was exactly when he was in his best moment in the game. I am happy with the evolution. Very happy to be fair” – Jose Mourinho, August 5.

As Sarah Winterburn wrote last week, the lingering doubts around Chelsea’s ability to retain the title surround the statistic that the champions had four outfield players who notched over 3000 minutes; the rest of the top four could only muster one. Chelsea’s doubters would opine that Mourinho’s second string is weaker than some of their rivals, they just didn’t need them last season.

Mourinho may indeed be “very happy” with Falcao, but that’s an extremely generous assessment of the Colombian’s pre-season. Falcao has been far nearer the Manchester United version than the one who shone at Porto and Atletico Madrid.

With Costa’s hamstrings continuing to collapse with worrying frequency, Falcao may well be tasked with leading Chelsea’s line on Saturday teatime; offside addict Loic Remy on the bench. Forgive me for being negative before we’ve even begun, but that isn’t a title-winning strikeforce.

Francis Coquelin
Harry Kane may have been attributed with the most notable rise of the last Premier League season but, across north London, Francis Coquelin may have earned the non-existent second prize.

Eight months ago yesterday, the Frenchman was lining up at the City Ground in Nottingham as part of Bob Peeters’ Charlton Athletic side. He was booked after half an hour for a mistimed foul, lucky to avoid a second booking after further clumsy misdemeanours. Watching him that evening, Coquelin being the integral part of Arsenal’s central midfield seemed an impossibility.

Arsene Wenger’s own opinion wasn’t markedly different. In March, Arsenal’s manager admitted that he had considered allowing his midfielder to leave the Emirates on a free transfer before allowing him to move on loan to the Valley. There was little in his performances in south London to hint at this incredible development.

“The world has changed,” said Wenger only two months later. “The appreciation today of the quality of a player is just down to the money you spend. If we had bought Coquelin at Christmas for £40m, everyone would say, ‘What a signing’. I am sorry he didn’t cost any money. He is still a good player.” From 0 to 40 in under nine weeks. Coquelin was the reason that Wenger did not make more of an effort to sign Morgan Schneiderlin. That’s one helluva compliment.

The nagging doubt, as with Kane, is that Coquelin’s form of last season might be the exception to the rule. Reputations can be built on sand, lost as quickly as they are gained. However, even if he fails to maintain the level of excellence from last season, the Frenchman should be immune from criticism. He saved Wenger’s skin last season.

It is not just Coquelin’s form that provides a potential headache for Arsenal supporters. The 25 matches he has missed through injury since the beginning of 2012 is more promising than many of his teammates, but Coquelin has never before started more than 19 league games in a season. He’s only reached double figures twice. Arsenal could potentially play 64 matches this season; Coquelin has never before managed half that total. That’s an awful lot of eggs in his basket.

Despite my underlying concern, it’s impossible not to wish Coquelin well. Having taken his chance with impressive vigour last season, this is an opportunity for a young midfielder to hold his own on the biggest stages. Who can’t get on board with that?

Tim Sherwood
No sooner had the sale of Christian Benteke to Liverpool gone through, the reaction of Sherwood was always going to provide intrigue. He has reacted exactly as many expected, buying players like a student in Walkabout on the first day of the new loan.

I don’t mean that as an insult, either. I wrote last month about my worries for Villa’s Premier League safety after losing the spine of their team, but in response Sherwood has done all he can to add excitement and quality to his side. There is nobody in the country who knows how it will go, but football is at its best when intrigue is raised; uncertainty equals interest.

If you’d have said at the beginning of the summer that Micah Richards, Jordan Ayew, Rudy Gestede and Jordan Amavi would have been playing in the same team come August, it would have raised a smile on my face. There’s a lot to be said for that.

Sherwood’s £43.5m splurge on half of a new first team may only cause disarray, but after the eye-bleeding football of Paul Lambert Villa fans will take anything new. Apart from relegation, of course.