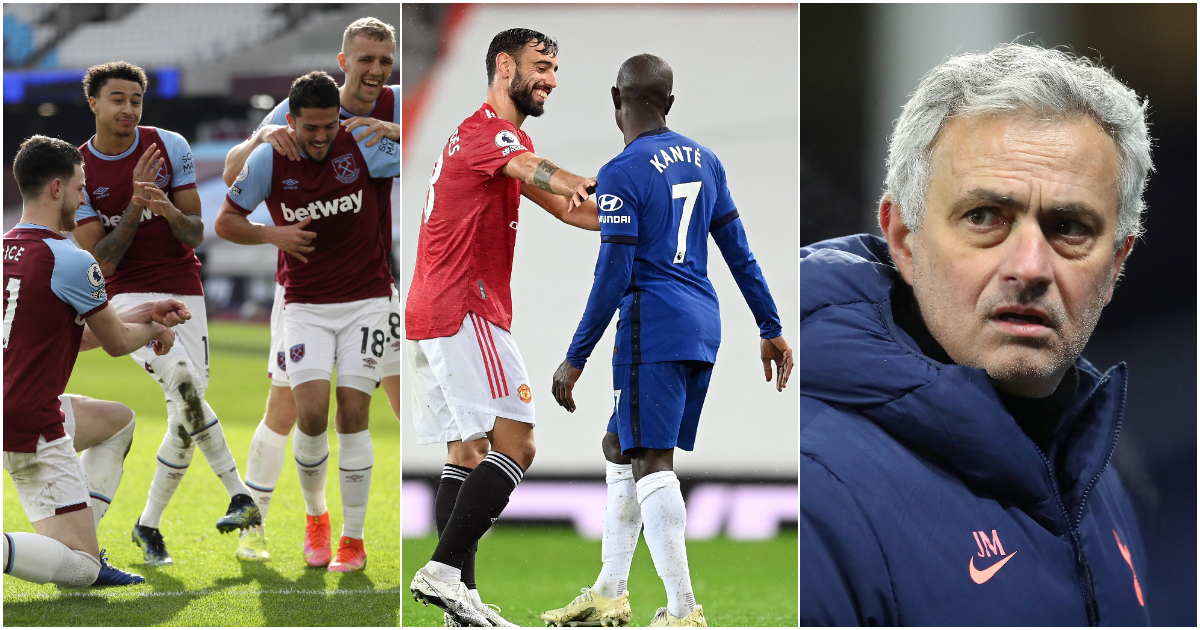 Game to watch – Chelsea v Manchester United
Chelsea have four wins and two draws in six Premier League games since killing Bambi, and are approaching a key four-game swing before the international break that will go a long way to determining their top-four hopes and those of others around them. After United it’s Liverpool and Everton before a clash with Leeds where who knows what might happen.

Both teams got the job done in Europe this week, with Chelsea collecting a hugely impressive away win against a desperately disappointing Atletico Madrid, while Manchester United completed their Europa League formalities against Real Sociedad in a game where Bruno Fernandes inexplicably played the first 45 minutes rather than grasping the chance for some much-needed rest that a 4-0 first-leg win had granted.

The wisdom or otherwise of that decision will become clear after a proper old-school Super Sunday clash that could see United’s lead over Chelsea clipped back to three points in the increasingly congested gaggle of teams contesting the minor placings behind Man City.

Let’s just all hope and pray that whatever happens it’s better than October’s reverse fixture, which was a joyless, goalless squib.

Team to watch – West Ham
David Moyes already sounds a bit annoyed that people have started to notice West Ham. He was very happy with their quiet excellence going under the radar.

But it’s reasonable to expect this West Ham side to give the leaders a proper game. This is a chance to gauge just how far West Ham have progressed and how much further this side could potentially go. Will they have the confidence to meet City as something approaching equals? They are the only side with a better record than the Hammers over the last eight games.

And if West Ham do get something and halt City’s preposterous winning run? Then the Hammers really will be in the spotlight.

Manager to watch – Jose Mourinho
Decisions, decisions. Jose Mourinho’s Plan A is demonstrably no longer working, and even in the good times had at best a patchy record against teams like Sunday’s opponents Burnley with Spurs’ fondness for inviting pressure at 1-0 and then conceding a late equaliser one of the most reliable bits of business in the early stage of this daftest of seasons.

Even draws have been hard to come by recently in the league, with five defeats in the last six heaping the pressure on an increasingly crabby and defensive – in every way – Mourinho.

So what to do? Stick with what’s clearly not working, or do something very un-Jose? Mourinho has been shown another way, and Spurs fans reminded of just what their attacking players are capable of, recently. A kind Europa League draw has played Gareth Bale and both Dele Allis back into some kind of form. Bale was Spurs’ best player in the eye-catching if unsuccessful second-half comeback attempt at West Ham.

Spurs’ next three games are against Burnley, Fulham and Palace. Spurs have already drawn against the latter two and scraped an unconvincing 1-0 win against the Clarets.

These are not fixtures for placing eggs in the “No mistakes from Davinson Sanchez” basket. They are fixtures to let Spurs’ attacking players off the leash. Tottenham’s theoretically risk-averse football has become a high-wire act. Will Mourinho accept the reality of the situation and allow himself an attacking safety net?

With James Maddison joining Leicester’s lengthy injury list – one that really deserves more attention given the success the Foxes have enjoyed this season in spite of such setbacks – the focus moves back to their talismanic striker.

And Leicester are in need of a lift after a rare but costly setback in this fine season with genuine hopes of Europa League glory up in smoke after a drab second-leg display against Slavia Prague.

Arsenal had their own problems in Europe before just about scraping past Benfica, but the state of the Gunners’ defending in that one and in general – that’s one clean sheet in the last nine games now – should give Leicester and Vardy in particular plenty of reason for optimism that Thursday’s blip can be put swiftly behind them.

Football League game to watch: Wycombe v Norwich
Champions League-chasing Leicester are up against unpredictable but always watchable Arsenal on BT. The London derby between Palace and Fulham is on the Beeb. If none of that grabs you, how about bottom v top in the Championship and the latest instalment of Norwich’s bid to jump straight back into the top flight?

There’s been precious little mucking about this season from Norwich, who have now put a three-match winless run firmly behind them by winning four straight, while bottom-of-the-table Wycombe aren’t going quietly after winning two of their last four.

European game to watch: Roma v Milan
Following back-to-back Serie A defeats, including a 3-0 whomping off Inter, and scraping past Crvena Zvezda in the Europa League on away goals after a couple of draws, Milan could really do with getting back on track this weekend but don’t have an ideal fixture in which to do so at a Roma side who have won nine and drawn three of their 12 Serie A home games this season.