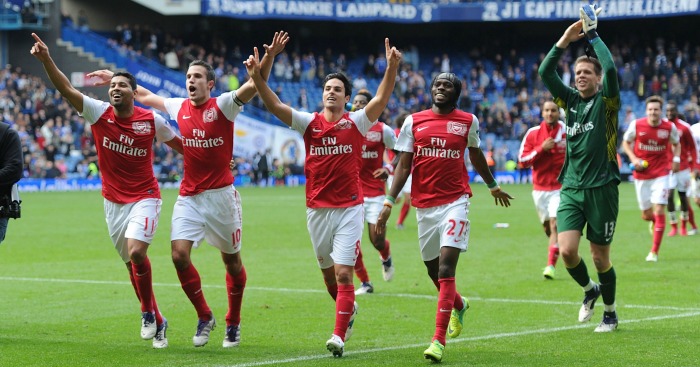 Game to watch – Chelsea v Arsenal
‘Arsenal have been piecing their season back together after a poor start and the manner of this win will provide added reserves of confidence and self-belief.’

How Arsenal must hope for a repeat of that narrative, taken from the BBC match report after their last victory over Chelsea at Stamford Bridge. But six years on, Arsenal do not have Robin van Persie in imperious form, the divine Mikel Arteta in midfield or a version of Theo Walcott yet to make the shift from promising to infuriating. And Chelsea are no longer managed by dead man walking Andre Villas-Boas or captained by a man recently accused of racially abusing an opposition player. Oh and they now have a Spanish striker who is settling a tad better than Fernando Torres. So the chances of Arsenal piecing their season back together after a poor start (it was ever thus) are decidedly slimmer than in 2011.

Hector Bellerin spoke this week of Arsenal seeing last season’s Chelsea recovery as evidence that a poor start is no bar to success, but those words are easily spoken after a victory over Bournemouth at home; they carry absolutely no credence until the Gunners prove that they can win games as underdogs, which means winning games away against those teams we will still generously call their top-six rivals. Their last attempt ended in 4-0 humiliation at Anfield.

Arsenal's away record vs teams in top six from 2013/14 season. They've won two of those matches, conceding 52 goals in 21 games. #AFC [BBC] pic.twitter.com/rr4DKeveZ8

History and logic suggests that the result is inevitable and it’s tempting to fast-forward now to talk of Mesut Ozil not turning up for big games, the curiosity of Wenger buying Alexandre Lacazette but still picking Danny Welbeck up front, and that brainless red card from Granit Xhaka. And yet, despite the crushing inevitability, this is still compelling viewing. Even though we know Chelsea are better prepared after Tuesday’s perfect victory in Europe. Even though we know that Tiemoue Bakayoko and N’Golo Kante can run further and faster than every midfield combination that Arsene Wenger could field. Even though it could end with Petr Cech in actual tears. We will be rubber-necking (and writing 16 Conclusions) on Sunday and we urge you to do the same.

Players to watch – Romelu Lukaku and Wayne Rooney
There will be chants, there will be waves, there will be kisses up to the heavens, but there will be precious few Manchester United fans watching Wayne Rooney’s return to Old Trafford in Everton colours who regret upgrading this occasionally inspired but largely chugging and wasteful version of their former hero. But he will get the appreciation his goalscoring exploits at United deserve, and then those fans who once worshipped him can turn their attention towards their new hero. And no, let’s not call him ROO-MELU.

Regardless of the back story of these two players facing the clubs they left in the summer, this will be quite the test for Lukaku, up against a defence that will be supremely motivated and incredibly well prepared to foil him. Martin Samuel wrote this week that the electrifying Lukaku has scored ten goals this season, but those ten goals have been scored against Real Madrid, West Ham, Stoke, Swansea, FC Basel, Gibraltar and Greece, with the outlier on that list a pre-season friendly. The one question mark against Lukaku is his ability to score in big games, and this is the biggest game of his nascent Manchester United career. It’s not a Champions League final or a local derby, but it is a traditionally tricky fixture for United and Ronald Koeman is a traditionally tricky opponent for Jose Mourinho.

When the crowd have finished rising as one to salute Rooney, they will all sit down as one to see whether Lukaku can deliver under pressure. The absence of Paul Pogba will make him a tad less confident than he might have been on Tuesday morning.

Team to watch – Liverpool
Always. In seven Liverpool games this season, there have been 29 goals. For those of you who struggle with even the easiest of sums, that is over four goals per game. That is ridiculous. But it does make Liverpool compelling viewing, particularly when they are facing a Burnley side who will happily give them the ball, drop deep enough to nullify their pace in attack and then boot the ball long and high to two massive strikers. There will be nothing sophisticated in Sean Dyche’s tactics but you do not have to be sophisticated to make Dejan Lovren look amateurish.

The added problem for Liverpool is that the fans will trudge into Anfield having been wounded by seven goals conceded in two games; it will be the players’ job to lift them in what are likely to be tense opening minutes. Judging by the reaction of some Reds’ fans to a midweek draw with Sevilla, patience is running thin. There are too many questions, with the loudest and most insistent being ‘does he actually know how to coach a defence?’, ‘why does he leave it too late to make substitutions?’ and ‘what the f*** is Lovren/Moreno doing?’

Manager to watch – Roy Hodgson
How lovely that fate has delivered us Roy Hodgson’s first Crystal Palace game as manager on the tellybox. And how lucky for him that it is against Southampton, who look only marginally less toothless than their beleaguered opposition. Whatever had happened behind the scenes (and the smear campaign went into overdrive seconds after the door had been shut behind Frank De Boer), there was little in Palace’s 1-0 defeat to Burnley last week that should have precipitated a sacking. And there is little wrong with this Palace squad that more rudimentary tactics and a few elderly arms around shoulders will not solve. Especially if both Mamadou Sakho and Ruben Loftus-Cheek could drag themselves onto the pitch.

The gif-makers will have fun with Hodgson on Saturday as he strokes his chin and seemingly looks addled, but previous rescue jobs at Fulham and West Brom suggest that he is an excellent short-term choice for a club who have made short-term choices a specialty. But if he is to pull off a third trick, he needs the goals and points that will drag Palace fans onto his side. And with Manchester City, Manchester United and Chelsea waiting after Southampton, his time is definitely now. Or rather Saturday lunchtime.

One-on-one battle to watch – Renato Sanches v Eric Dier
“He was a big focus, a new signing in his first game but you can’t judge any player on one game or, as in this case, 70 minutes. A move to another country takes adaption, as does a new style of football – it is crazy to think it can happen and come together in one game.”

So how many games will it take, Paul Clement? This is the Premier League and it offers no respite. After being quite easily shackled by Newcastle’s Mikel Marino, Renato Sanches now has to go to Wembley and see if he can find a path through one of the meanest defences in the Premier League. And Eric Dier, who will act as either a third or fourth centre-half depending on the formation. The good news for him is that this weekend the focus will not be on him but Harry Kane, Dele Alli, Christian Eriksen…wait a minute, is this still a good thing?

Football League game to watch – Nottingham Forest v Wolves
This section is no longer any fun to write now I can’t just pick Huddersfield Town regardless of the opposition. The ‘big’ Sky game is Barnsley (15th) v Aston Villa (18th) so we are ignoring that one and advising you to follow this potential goal-fest from afar. Especially as it pits Barrie McKay (two goals, four assists) against Leo Bonatini (three goals, two assists). Oh and Daniel Storey against his good friend Adam Bate.

European game to watch – Real Sociedad v Real Madrid
No team in Spain has more points. No team in Spain has scored more goals. Only one team is above them in the La Liga table. Real Sociedad really weren’t supposed to be this good. Especially when most of their goal hopes are pinned on one Juanmi, who scored a grand total of zero goals in 17 games during one disastrous season at Southampton. His team have already seen off Celta Vigo, Villarreal and Deportivo La Coruna and now face Madrid in the Real sexy derby, with Madrid already four points behind them and Barcelona.

Just imagine Ronaldo’s reaction if he is basically out of the title race without actually playing a game. We demand PlayerCam.