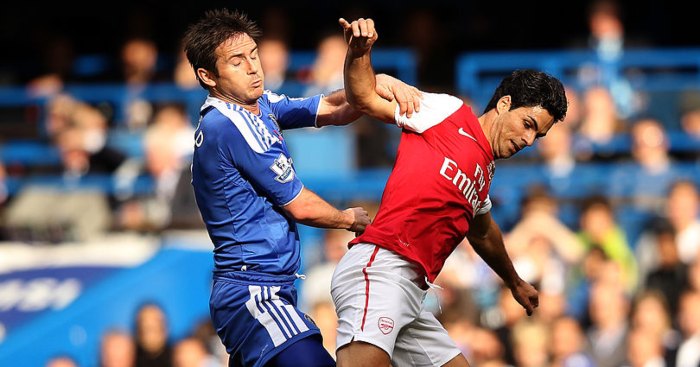 Game to watch: Chelsea v Arsenal
Ah, the David Luiz derby. The William Gallas derby. The Ashley Cole derby. The Petr Cech derby. And how either side could do with a dose of three-quarters of those players this week. Instead we only have Luiz, showing the Blues exactly what they are missing: comedy.

This is a game between two not-quite teams led by two not-quite managers with not even a season of Premier League management between them. Both are infuriatingly inconsistent and both are on a similar run of form, struggling for goals (both have scored six in their last five games) and struggling for that elusive feeling of invincibility. ‘Works in progress’ is the polite phrase.

The intriguing thing about this set of midweek fixtures is that we saw all these battles less than a month ago, though presumably this time we will not see Frank Lampard make the bizarre error of playing a back five. The temptation will surely be to drop Mason Mount, who has not scored nor really looked like scoring in Chelsea’s last eight games, with Ross Barkley and Mateo Kovacic reasonable options for that third midfield spot.

Meanwhile, there would certainly be a case for Arsenal trialling the first back five of Arteta’s tenure after watching the Blues struggle against that formation in Newcastle, but realistically, this Arsenal side is not equipped to pull off a bus-based heist. It’s far more likely that they will look for those same quick, left-sided combinations that brought some joy against Sheffield United before the usual lack of resolve saw them throw away the third lead of Arteta’s five Premier League games in charge.

This match will likely offer a sharp contrast to the performance we saw from Liverpool on Sunday, though both Lampard and Arteta could argue that they have been dealt pretty rotten hands; nobody would have realistically or reasonably expected either to challenge for the title. But defeat at Newcastle has probably made this game a must-win for Lampard, who will be desperate to preserve the five-point cushion to fifth that they have barely deserved (they would probably be battling for sixth in any other season).

As for Arteta, he would likely take a draw right now, with the condition that the comeback and not the capitulation is theirs.

Player to watch: Anthony Martial
Anthony Martial’s last eight goals for Manchester United have all been scored in games in which Marcus Rashford has also scored. That is a pretty compelling statistic as Manchester United prepare for weeks and possibly months without Rashford. Discounting penalties, Martial has not actually scored in a Rashford-less game for almost a year. The facts would suggest that without his almost-strike-partner, the Frenchman is pretty much a passenger. “That’s why he’s not quite good enough for United,” said Roy Keane after one miss against Liverpool.

Martial has to make a mockery of those statistics in the coming games or face the ridicule of being bombed out for an on-loan striker. First up are Burnley on Wednesday and the omens are good: Martial has scored in each of his three games against the Clarets. And two years ago he even managed to score the only goal of a 1-0 win with Rashford largely confined to the bench. Martial would surely take a near-repeat of that scenario on Wednesday. It’s time for Robin to prove he can thrive without Batman.

Team to watch: Liverpool
Because it’s Thursday and it’s not even Christmas. What a treat. Seriously, Liverpool could be our team to watch every single weekend and every single midweek because they really are so incredibly good. And on Thursday night they face a Wolves side who beat them little over a year ago at Molineux, though Liverpool could conceivably start with none of that XI when they return on Thursday. We would certainly be surprised to see Daniel Sturridge.

The bookies give Wolves a roughly one-in-six chance of winning this game at home against the champions-elect, but that’s probably being generous to Wolves as we are edging into territory where a Liverpool defeat would leave us thoroughly discombobulated. Let’s just assume they are going to win all of the games and set all of the records from here and merely enjoy the show.

Manager to watch: Eddie Howe
Four points from a possible 36, with one of the nadirs coming at Brighton over Christmas when they were comprehensively outplayed by Graham Potter’s side.

‘They are currently the worst team in the Premier League. On the south coast, they absolutely looked that bad. In a game they could not really afford to lose, they could not even muster a second-half shot on target,’ are the words I wrote on December 28. At that juncture I was arguing against a change of manager, but a 4-0 and a 3-0 defeat later, Seb Stafford-Bloor was writing on these pages about a marriage gone stale. It now seems increasingly likely that this is Howe’s last season in charge of the Cherries; what happens in the next two games against Brighton and Aston Villa could decide whether that end comes before May.

“We have to become very internal,” said Howe this week. “We have to use all the negativity around us in a positive way to show we’re still fighting and we can do it.”

Lose at home to Brighton and that negativity will only intensify. First, Howe has to find a way to eke a goal out of this side without Josh King; Callum Wilson at least had his first shot on target since October in Saturday’s 1-0 defeat to Norwich. Small acorns and all that.

European game to watch: Napoli v Lazio
“We need to do some soul-searching and do everything we can to find a solution,” said Gennaro Gattuso after yet another defeat for Napoli in a disastrous season which has seen them tumble to 11th. Some sanctuary could come in the form of the Coppa Italia, which is now at the quarter-final stage. The problem? They’re facing Lazio and Lazio have won their last 13 games against Italian opposition. This could mark the end of Gattuso even before his reign has properly begun. Tune in for the meltdown.