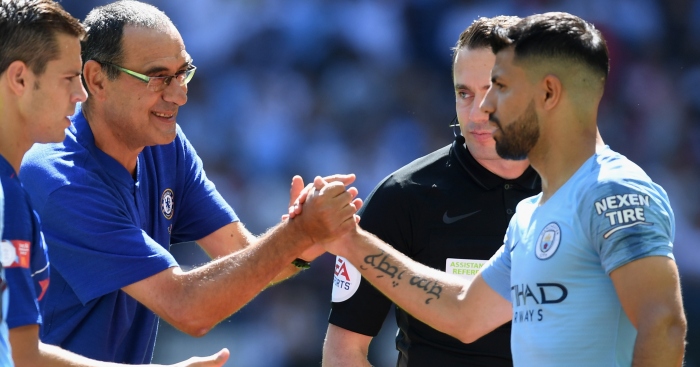 Game to watch – Chelsea v Manchester City
One win in their last four means this meeting is no longer the top-of-the-table clash it promised to be a few weeks ago. Chelsea have slipped ten points off Manchester City’s pace after the flaws in Sarri-ball belatedly showed their faces. But that doesn’t make this Saturday evening offering any the less appetising. Especially to those who appreciate a passing game.

This could be the closest thing the Premier League ofers to a game of two-touch. It brings together the current champions, who broke the record for successful passes in a game last year, and the previous title holders, who have recorded the highest number of passes in a single match this season.

The difference between Sarri’s Blues and Pep Guardiola’s is that City pass with greater purpose. Of course, Guardiola has had a two-year headstart on Sarri and the progress the Chelsea boss has overseen since taking over in the summer has been considerable. But while these two sides, according to Opta, are the only teams to have recorded over 300 ten-plus pass sequences, City are more successful in moving the ball to reach its intended destination – the opposition box.

Chelsea’s possession too often seems to be for the sake of it. Perhaps that perceived weakness will be an asset against City: if Sarri’s side can keep the ball, play around the press and deprive City more successfully than their other opponents, then Guardiola’s men will have fewer opportunities to mount their dizzying attacks.

One thing seems certain: neither side will get the possession they have become accustomed to. City have had the ball for 68% of their season, while Chelsea have played with only marginally less – 67%. Both teams, if they are playing to win, will have to be more efficient with what possession they are given.

That is where both managers have concerns. Chelsea’s attacking deficiencies are well documented, with neither Alvaro Morato nor Olivier Giroud offering the regular goalscoring threat Sarri craves. Eden Hazard’s goals have also dried up, with the Belgium star not having notched since the Southampton trip on October 7.

Guardiola doesn’t have much to worry about but the lack of a cutting edge is one thing to keep him awake at night. The Premier League table suggests he need not be concerned, given City have scored 11 more goals than anyone else. But, as he admitted, his side’s lack of ruthlessness at Watford led to a lot of unnecessary arse twitching in the final stages, by which time Gabriel Jesus could and should have had a hat-trick. Given current form, Guardiola will be desperate to get Sergio Aguero back from a two-match absence, even if he has offered his backing to Jesus.

City cannot afford to slip up as they may have been nudged off the Premier League summit before they even kick off at Stamford Bridge. And for Chelsea, their 18-match unbeaten run will seem a distant memory if they lose for the third time in four matches.

Player to watch – Ander Herrera
Jose Mourinho has a long list of grievances with his squad. Chief among them in recent weeks has been their lack of basic effort. Since criticising his players for just that in the wake of the 0-0 draw with Crystal Palace a fortnight ago, Mourinho has brought Herrera back into his XI and it is probably no coincidence that the levels of industry appear to have been upped.

Herrera typifies the basic values Mourinho treasures most at this very moment. The fact that a Manchester United manager has to repeatedly appeal for ‘intensity and desire’ is a damning indictment of everyone at Old Trafford, but you cannot blame the manager for sticking with those he knows he can trust.

Mourinho wants ‘mad dogs… who bite the ball all the time and press all the time’ and Herrera is one of few United players willing to sit and fetch for the manager. The Basque star, United’s player of the year in 2017 who is out of contract at the end of the season, forms part of a constantly-changing midfield and given how things are panning out for the Red Devils, this is his time to prove his worth and strengthen his bargaining position in contract negotiations.

Nemanja Matic earned the man of the match award against Arsenal, which surprised more than a few observers given the Serbian seems to have been off the pace for much of this season. Paul Pogba is falling well below everyone’s standards except his own and while Marouane Fellaini is one of Mourinho’s favourites, the manager can’t base a midfield around the Belgian in case he needs to dash off in an emergency to play up front.

So Herrera has the opportunity to cement a place, for now at least, in Mourinho’s side. Despite Paul Scholes’ curmudgeonly criticism, Herrera drove United on against Arsenal, making more key passes and twice as many interceptions as anyone else on the pitch. He needs an equally dominant performance against Fulham to help United avoid making heavy weather of even the Premier League’s most porous defence.

Team to watch – Watford
After beginning the season as the Premier League’s surprise package, the Hornets head to Goodison Park for MNF as the side in the worst form in the division.

Since beating Tottenham to record their fourth win of four, Javi Gracia’s men have won only two of their subsequent 11 matches and none of their last five. After flirting with the top four, the Hornets are descending slowly towards where many presume to be their natural habitat.

Watford fought creditably against Manchester City in midweek and they gave Pep Guardiola an uncomfortable last five minutes while fighting for what would have been a bonus point against the champions. Their results do not appear to be harming their spirit, though coming up against their old boss and their former star player for the first time will offer the Hornets added motivation should it be needed.

Gracia, presumably, will be looking towards his attack as the area most in need of improvement. Watford have been shut out in three of their last five and five of their last nine matches. Andre Gray has been sat patiently on the sidelines through much of their recent run and it may be time for Gracia to reunite the club’s record signing with Troy Deeney.

Manager to watch – Ralph Hassenhuttl
The Austrian is an exciting appointment from Southampton. Given their recent managerial recruits and the mire they find themselves in, the fear was that Saints would pick Sam Allardyce or David Moyes off the merry-go-round and muddle on through the season with the only objective being to avoid relegation.

But Hassenhuttl’s arrival demonstrates more ambition and a longer-term vision on Saints’ behalf. This is a manager with a proven track record of success at both ends of the table while demonstrating he knows how to take teams from one end towards the other.

However, Hassenhuttl’s first priority is the job that Big Sam and a few of his mates at the British Manager’s Club would perform before implementing their exit strategy. Southampton simply must become harder to beat.

Saints have conceded 15 goals in their last five matches to leave them tied on nine points with fellow drop-zone dwellers Fulham and Huddersfield. Mark Hughes tried all manner of formations and personnel but failed to find a solution. Hassenhuttl has barely two training sessions with his new players to stiffen them up for the trip to Cardiff.

Some of the Saints’ required improvement will come down to mental factors and mindset. They switched off at the start of each half at Tottenham on Wednesday night after allowing Man Utd to get back in the game last weekend with two quick-fire goals. Simple mistakes for which Hassenhuttl will hope to have quick fixes.

One-v-one battle to watch – David Brooks v Andrew Robertson
One of the more fascinating sub-plots to Bournemouth’s clash with Liverpool is the head to head between two players forged in the Championship and now thriving in the Premier League.

Liverpool left-back Robertson missed the win at Burnley due to a dead leg and perhaps an abundance of caution on Jurgen Klopp’s part ahead of another huge week for the Reds. Presumably Klopp will be rather more reluctant to be without the Scotland skipper on the south coast given Liverpool’s left and Bournemouth’s right will be one of the most decisive areas in the outcome.

That is because Brooks has been on fire since moving from Sheffield United in the summer. Liverpool know all about the Wales international having watched him extremely closely in the Championship, as did Tottenham. But Brooks opted for a smaller step to Bournemouth and it is turning out to be an astute decision.

Eddie Howe sat Brooks on the bench for Bournemouth’s hardest two fixtures so far – the trips to Chelsea and Manchester City – but the expectation is that the 21-year-old will be trusted at home, just as he was when he set up the Cherries’ only goal against Arsenal.

Should both players get the nod, there will be no man-marking jobs being allocated. Robertson will be too busy thinking about flying up Liverpool’s wing, while Brooks will be happy to play in the space vacated by the left-back, or wander inside to find it there. But it remains an intriguing battle which offers evidence that there is talent in the lower leagues for the Premier League to pilfer.

River Plate and Boca Juniors will finally play the second leg of their Copa Libertadores final almost a month after their first. We all know what happened when they tried to play the decider at El Monumental: it all got a bit silly in Buenos Aires, while on Twitter, British football journalists bitched among themselves.

So, to be on the safe side, CONMEBOL decided to move the clash 6,200 miles up the road to Madrid. There are 10,000 supporters from each side making the trip to Spain with Madrid police preparing for ‘the highest risk match in Madrid’s history’. In case the football interests you, the final is evenly poised at 2-2 and the deciding leg threatens to be almost as entertaining as the chaos off the pitch. Almost…

Football League game to watch – West Brom v Aston Villa
Channel 403, or Sky Sports Leeds, has two Championship offerings for you this weekend: managerless Reading hosting Sheffield United on Saturday afternoon while Chelsea are playing Man City; or at the same time as Juve v Inter, it’s a Midlands derby between the Baggies and Villa.

The last derby involving Villa we recommended turned out to be a good steer when the Villans beat Birmingham 4-2. We then gave you a nudge to check out Villa against Forest a few days later. Just the 10 goals in that one…

So we’re taking the ‘if it ain’t broke, don’t fix it approach’ in urging you to watch Villa at The Hawthorns if you don’t have access to the Serie A shenanigans. Villa can move into the top six, briefly most likely, with a win while the Baggies are looking to move within a point of Leeds in second. The last 10 games involving either side have produced 36 goals.

So start your weekend right with Albion 0 Villa 0.