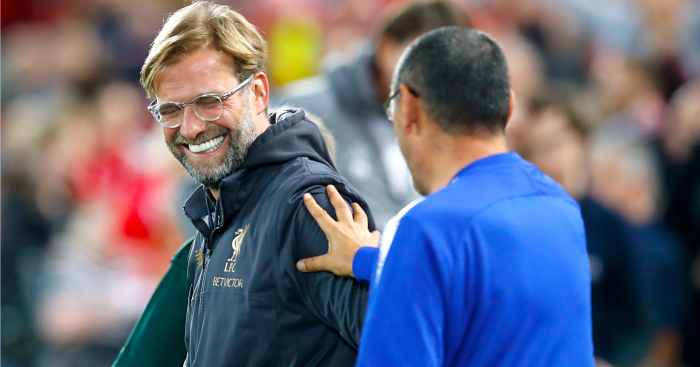 Game to watch – Chelsea v Liverpool
Given that these two sides are so similar, there is always the possibility of Liverpool and Chelsea cancelling each other out at Stamford Bridge. They both play 4-3-3; they both crave possession and press like rabid dogs when they don’t have it; they both rely on full-backs to fly forward; they both have world-class players across the front capable of winning any game with a moment of magic. And it is that last common factor which could make the difference.

It certainly did at Anfield on Wednesday when the Reds and Blues offered a Carabao Cup appetiser for the weekend’s Premier League entree. Eden Hazard came off the bench to score a better goal than the one dispatched into the same net to earn the Puskas Award this week, while inflicting upon Liverpool their first defeat of the season.

Jurgen Klopp and Maurizio Sarri will alter almost three-quarters of their players – there were eight changes apiece from the weekend – but the Liverpool boss saw Wednesday night as a valuable exercise ahead of the re-match. “The good thing is we know much more now what will happen on Saturday because we’ve felt it,” he said.

What Sarri will know is that Chelsea won’t be afforded the same space as they were at Anfield, especially in the early stages. With Fabinho making his debut and looking as far off the pace as Klopp feared, the Liverpool midfield was unable to get a handle on the Blues, and Cesc Fabregas in particular. Once they solved that problem, it gave them a base upon which to build and they should have had the game won before Hazard made them pay.

Even if Stamford Bridge plays host to a stalemate, it will be chaotic rather than cagey. And we can’t wait.

Player to watch – Paul Pogba
All eyes will be on the Manchester United midfielder – wherever he is on Saturday.

At the end of a turbulent week during which Pogba has been the story far more than even United’s miserable Carabao Cup exit, there must be a temptation for Jose Mourinho to sit his insolent midfielder’s backside on the bench for the trip to the London Stadium. It wouldn’t be the first time the manager has tried to put Pogba in his place. But we know now that it just doesn’t work.

Pogba won’t be made to reflect inwardly on his own shortcomings, certainly not by the current manager. Any response to being dropped now would most likely be made in the press or on Instagram, rather than on the training pitch or in his next appearance.

So, until Mourinho can get rid, he may as well play Pogba in the hope that auditioning for Barcelona will reap more immediate benefits for a team in dire need of them. Barca will have been most impressed with Pogba’s reverse pass to set up Fred for the opener against Wolves but the 25-year-old undid that good work by giving the ball away cheaply in his own half to allow Nuno’s side to break and bag the leveller to earn a point at Old Trafford.

His display last week – prior to attacking Mourinho’s tactics – was the perfect summary of Pogba’s United career so far: One moment of brilliance and another cheap mistake punctuating significant periods of anonymity.

If Pogba wants out, then he needs to show Barcelona, or anyone else, that his commercial value is “worth the hassle for what he gives on the pitch”.

Team to watch – Everton
The Everton fans who cared little for Sam Allardyce’s approach were warned to be careful what they wished for, and Marco Silva’s early days at Goodison Park have demonstrated that the Toffees’ problems did not start and end with their former manager. Silva has made Everton more expansive but the Portuguese boss, like his predecessor, has yet to find a balance between function and flair.

Everton are undoubtedly more fun to watch and that will buy Silva more time to perfect his blend, but the Toffees simply cannot keep conceding goals in this manner. They haven’t kept a clean sheet all season and have conceded 1.8 goals per game in Silva’s six Premier League matches – a quarter of the number of games Allardyce was given, during which time his men shipped 1.25 per match.

Handily for Silva as he looks for only his second win of the league season, it bodes well that Fulham have proved to be welcome visitors to Goodison in the past. Everton have won all 13 of their Premier League home games against the Cottagers by an aggregate score of 32-7, giving them the best 100 per cent win record against a team on home soil in the competition.

More relevant are Fulham’s equally worrying problems in defence. They too are still in search of their first clean sheet while no one outside the bottom two has conceded more goals. Everton will get chances on Saturday but Silva’s concerns are two-fold: can they finish those opportunities? And, at the other end, can they keep the door closed on Aleksandar Mitrovic, the Premier League’s top scorer?

Silva’s job is hardly in jeopardy because Everton fans won’t be quite so swift in their judgement this time. But having won, drawn and lost in their opening three home games – all against bottom-half opposition – Everton need to start offering tangible proof of their development rather than just anecdotal evidence.

Manager to watch – Unai Emery
Arsenal are ticking along very nicely right now. After the toughest of starts to life in the Premier League, Emery has inspired six consecutive wins and another against Watford on Saturday would make this the Gunners’ best run in two years.

What revolutionary thinking has inspired such form? Call him crazy, but Emery is finding ways to pick his best players in the same team. Namely, Alexandre Lacazette and Pierre-Emerick Aubameyang.

The two strikers have played together 12 times this year and in those dozen games, they have produced 13 goals and five assists between them. That success doesn’t mean Emery has perfected his plan just yet. At present, Aubameyang is being asked to start from a position wider than his usual centre-forward role. Danny Welbeck’s form may also provide a headache for the new manager, with Emery admitting that the England forward’s brace on Wednesday could put him into contention for a start against the Hornets.

Emery has similar dilemmas across his XI and he is making that competition for places work in his favour. Having won six, Arsenal now have another half-dozen winnable games before their next huge test against Liverpool at the start of November.

One-v-one battle to watch – Jordan Henderson v Jorginho
There will be individual battles being waged all over Stamford Bridge on Saturday evening so let’s get right into the heart of them with two players who still leave many confused about their level of influence.

Their managers love them but as the pivots around which Liverpool and Chelsea play, some remain unconvinced about Jorginho and particularly Henderson. You don’t become Reds captain and a starter in Klopp’s midfield by being as limited as some suggest Henderson is, and Sarri made the signing of Jorginho one of the conditions of his acceptance of the Chelsea job after building his Napoli side around the Italy star.

Sarri rates Jorginho so highly that he’s prepared to play the best defensive midfielder in the world out of position to accommodate his regista. The Italian likes a pass – as evidenced by the fact that last week at West Ham he attempted more than any other Premier League player in a match since Opta started taking records 15 years ago. His 180 passes failed to inspire Chelsea, with West Ham content to sit back and let the Blues recycle possession so long as it didn’t penetrate them.

Liverpool, led by Henderson, will not allow Jorginho that same time on the ball or the opportunity to get his head up. They afforded that privilege to Cesc Fabregas in the early stages at Anfield on Wednesday night and it was only once they got to grips with the central midfielder that they began to get a grip on the game. That, presumably, was one of the things Klopp learned about Chelsea’s style, regardless of the fact neither Fabinho nor Fabregas will start on Saturday.

While the battle between Kante and James Milner will be exhausting just to watch, Henderson versus Jorginho will likely be much more serene, but no less crucial.

Football League game to watch – Sheffield Wednesday v Leeds
Marcelo Bielsa has Leeds flying high at the top of the Championship – but this time last year, so too did Thomas Christiansen. It is almost a year to the day since Christiansen took his mighty Whites to Hillsborough, where they were humbled 3-0 by their Yorkshire rivals. It was one of six defeats in seven that derailed Leeds’ season and saw Christensen go from saviour to sacked in just a few short months.

Bielsa’s Leeds are a different proposition but having suffered their first defeat of the season last week at home to Birmingham, it is on them to prove it was just a blip and that there’s no truth in the rumour that Leeds, Leeds are falling apart again.

European game to watch – Juventus v Napoli
“Napoli is the antagonist of Juventus right now,” said Massimiliano Allegri ahead of the meeting of the top two – this season’s and last – on Saturday evening. It’s the biggest match of the Serie A season and while it can hardly be called a title decider, it will certainly shape the coming weeks in the race for the scudetto.

The Old Lady is top, of course, with a three-point cushion between themselves and their greatest irritation over recent years. Napoli pushed the champions close last season and they go to Turin looking for their second consecutive win at the Allianz Stadium. Another victory would throw open the title race. Defeat for Carlo Ancelotti would leave his new(ish) side choking on the dust of his old one.