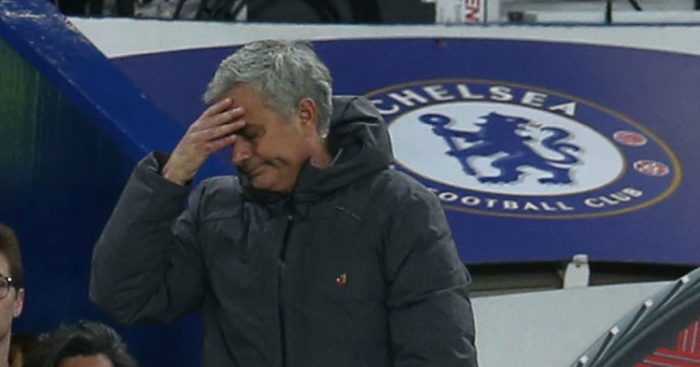 Game to watch – Chelsea v Manchester United
As if by way of a wholesale apology, the Premier League returns from the latest international break with a vengeance. It bid a limp adieu with Liverpool and Manchester City’s underwhelming stalemate earlier this month, but will be greeted with open arms on Saturday lunchtime at Stamford Bridge.

That same courtesy will likely not be extended to Jose Mourinho. His relationship with the supporters he once shared a mutual respect for has deteriorated, if indeed it still remains in any capacity. Winning three Premier League titles in south west London would ordinarily be enough to have you deified, but two sackings in the space of eight years have taken their toll.

The Portuguese instead forged a similar bond with the Old Trafford faithful, and until Manchester United’s game against Newcastle, that looked doomed too. The vocal majority still backing Mourinho had become a mumbling minority, defending him on the basis that sacking managers is not the United way, or that certain rivals have spent more money.

A combination of mistaken media reporting and a stirring comeback victory have turned that tide somewhat. It comes to something when scoring in the last minute to salvage a 3-2 win from two goals down at home to a winless and relegation-battling side is seen in an entirely positive light, but it was a much-needed example of a manager, a team and a fanbase pulling in the same direction.

Some might argue that the break came at the most inopportune time, that United were not able to capitalise instantly on Alexis Sanchez and Anthony Martial’s potentially transformative goals, but Marcus Rashford’s confidence will have been boosted by a fine performance against Spain, Paul Pogba played the full 90 minutes in a win over Germany, and Romelu Lukaku scored twice. Luke Shaw’s new contract only added to the renewed feel-good factor. This should be a squad with a new-found confidence, one happy to finally be able to express itself.

To that end, it will be interesting to see how the visitors approach this game. Can Mourinho resist the temptation to stymie and spoil? Can he afford to? He has lost his last four games at Stamford Bridge, and the last player to score for him at this stadium was Diego Costa.

Mourinho might as well go for it against Chelsea. It’s a free hit, we always lose at Stamford Bridge anyway and even the most positive fan won’t be optimistic about us getting a result there, so why not give it a go?

He must avoid predictability. Mourinho tends to reach for his Marouane Fellaini and Nemanja Matic comfort blankets in such situations, but that would surely play into Chelsea’s hands, the pair rendered statues by a short, slick passing game. The home defence would relish facing the one-dimensional threat of Lukaku, a completely different player for club than he is for country. And United’s backline would provide precious little resistance against Eden Hazard and Olivier Giroud without a cohesive plan.

But Maurizio Sarri cannot let complacency slip in. Chelsea are unbeaten in their opening eight games, and have won the title on the only two previous occasions they have extended that run to nine. Mourinho was in charge when they dominated in 2005/06 and 2014/15, and Sarri is somehow in a position to emulate such successes. His side are in the first stages of their development, but that is no reason to stifle expectations.

With Manchester City and Liverpool also facing teams in the bottom half this weekend, it would be a psychological bonus to keep the pace – or even capitalise on a surprise – against a much tougher opponent. It is a welcome change that this not about Mourinho returning to his former club, and is instead simply a game between a title contender and a struggling giant, both with far more important matters on their mind.

For Chelsea, this is the time to lay down yet another marker. For United, this is a chance to build on hardly the most stable of foundations that were laid against Newcastle. For Mourinho, this might be his final opportunity to prove he is worthy of his seat at elite management’s top table. Having earned that very seat at Chelsea, forcibly removing him would be collateral damage if they are to continue their march.

Player to watch – Wilfried Zaha
“I don’t quite know what I can do about it until such time as we play a game without Wilf and win. It’s a fact. He didn’t play today and again we didn’t win. It’s a pure fact that we have to learn to live with.”

For so long, Roy Hodgson managed to ignore the raucous trumpeting, the pungent smell and the elephant footprints in the corner of the room. It took a 2-0 defeat to a rudderless, hopeless Southampton side for him to finally admit he and Crystal Palace had a problem.

Their over-dependency on Wilfried Zaha has reached alarming levels. Palace’s record without the Ivorian is laughable: they have won one and lost 15 of the 17 games he has not started since the 2015/16 season, scoring just ten goals. A 3-2 win over a soon-to-be-relegated Sunderland in September 2016 is their only Zaha-less win in that time.

So the news that Zaha has returned from the international break with a thigh issue is troubling. Either Hodgson rushes his best player back and risks further injury, or formulates a plan without him and trusts the rest of his squad. Handing Max Meyer a chance might be a start.

The problem is that Palace can hardly afford to waste time in trying to fix what is clearly broken. They are 14th in the table after eight games, and face an unenviable run. A trip to Everton is followed by games against Arsenal (H), Chelsea (A), Tottenham (H) and Manchester United (A). With even the fixture list actively laughing at them, now is the time to prove they can stay upright without their stabilisers.

Manager to watch – Jurgen Klopp
If Jurgen Klopp has one obvious blind spot, one glaring weakness as a manager, it is his record against lesser sides. His power of personality and pressing style pays dividends against direct rivals, but a combination of complacency and compact defence has so often been his kryptonite.

The chink in the armour has been exposed further in England. Since Klopp was appointed in October 2015, Liverpool have faced sides who were in the bottom three at the time on 19 occasions. They have won six, lost six and drawn seven. This year alone, they have drawn with West Brom (20th) and Stoke (19th) in April, and lost to Swansea (20th) in January. Klopp has never beaten a team in 18th in the Premier League, which is precisely where Saturday’s opponents currently reside.

“We might have been doing better against the top sides than those below them,” the German admitted in May 2017, but that has to finally change if title ambitions are to be realised. Almost every side would relish back-to-back games against Huddersfield and Cardiff, but these are the sort of obstacles Liverpool have failed to clear in the past – and injuries will be no excuse if they trip up again.

Team to watch – Fulham
Those dreaded words were uttered in our rundown of why this Premier League season is so f***ing brilliant, and ‘relegation six-pointer’ really is not the type of phrase that should be bandied about freely. Along with ‘we need to talk’ and ‘Jiminy Jilikers’, the words are more impactful when used more sparingly.

But in the case of Cardiff against Fulham, it is apt. These teams last met on Boxing Day, when the latter won 4-2 in Wales to go 11th in the Championship table. Plenty has changed since, and while Wolves are making themselves feel comfortable, two of the sides that came up together are in danger of going straight back down.

That was the sobering expectation for Cardiff, who have done well not to be cut adrift after a difficult run of fixtures. But for Fulham, this has been a pretty catastrophic start. They have won just once, are the only club yet to keep a clean sheet, and are staring down the barrel worryingly early. If this international break was a time for introspection and reflection, it was one for solutions, too.

A home win on Saturday breathes life into Cardiff, while an away victory puts Fulham on the right track. A draw serves neither side particularly well, and memories of the 2013/14 season are still painfully fresh. Both teams were relegated together from the Premier League four years ago, Cardiff having failed to capitalise on winning both six-pointers against the Cottagers. Whoever does emerge victorious this time around has to use it as a platform to kickstart their campaign.

One-on-one battle to watch – Alexandre Lacazette v Harry Maguire
I love them both. It’s genuinely like trying to choose between your favourite child, only one is a remarkably talented footballer capable of unexpected brilliance, and the other is in fine form for Arsenal.

Football League game to watch – Sheffield Wednesday v Middlesbrough
Lovers of the Championship are in luck this weekend. The three games chosen for live coverage feature six teams in the current top ten, each with a Premier League past.

On Saturday, Blackburn (1oth) host Leeds (3rd) at lunchtime, while leaders Sheffield United travel to Derby (8th). The 3pm blackout will starve us of Nottingham Forest (5th) against Norwich (9th), but this is certainly the weekend where wheat and chaff are separated.

But the action starts on Friday evening, when Middlesbrough (4th) head to Hillsborough to face Sheffield Wednesday (6th). Will Tony Pulis grind Jos Luhukay down, or can the Owls make it five games unbeaten?

Eight points separate the entire top half with over a quarter of the season played; the field will be thinned out by Monday.

European game to watch – Inter Milan v AC Milan
For the first time in a long time, Italy is preparing for a Derby della Madonnina between two sides in great form. Where Inter Milan and AC Milan have often met in inauspicious circumstances in recent times, both will relish Sunday evening’s game.

Inter have won their last six matches in all competitions, with two Champions League victories littered between their Serie A successes. Luciano Spalletti’s solid summer business has held up to scrutiny, helped by Mauro Icardi’s timely return to form.

Milan are seven places below in tenth, but their game in hand distorts their true position. Gennaro Gattuso has overseen an eight-game unbeaten run in all competitions since defeat to Napoli on the opening day. Juventus (0) are the only team to have lost fewer matches in Serie A this season (1).

Three of their last five meetings have ended in draws, with both teams picking up one win apiece. All that remains to be seen now is whether Milan can cope with such an arduous journey for an away game.