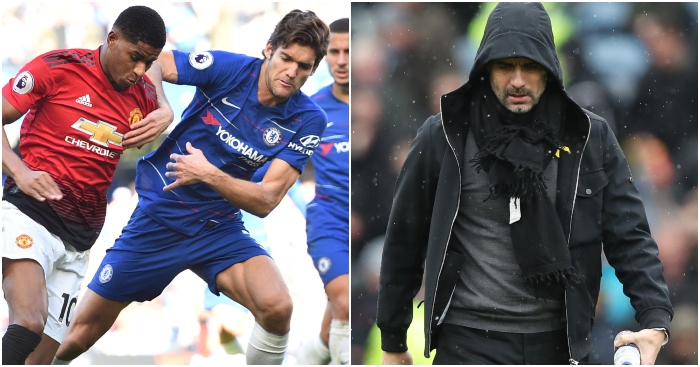 Game to watch – Chelsea v Manchester United
For most people perusing the FA Cup fifth-round fixture list, this isn’t only THE game to watch, it’s the ONLY game to watch. There’s little the FA can do about the make-up of the draw and the ties that it produces, but this weekend seems exceptionally light on anticipation.

Many might appreciate the last 16 featuring fewer of the big hitters and more rather less glamorous names, and we would not dispute that. For the likes of Newport, AFC Wimbledon and Doncaster, this is a sodding massive weekend which their fans hope will live long in the memory. Even QPR fans are relishing the fifth round because it has been 22 years since they last got this far. For most fans without a runner in the race, though, fifth round weekend will be forgotten before the tie of the round even kicks off on Monday night.

The scheduling doesn’t help. Eight ties are spread out over four days and six TV slots in addition to the traditional 3pm kick-off, of which there is just one on Saturday: AFC Wimbledon v Millwall. It isn’t a good look for a competition that sells itself on tradition.

It’s the slowest of builds but at least the fifth-round works up to a crescendo. Monday night offers a repeat of last year’s final, though two different managers in the dug-out offers some encouragement that the Stamford Bridge clash will be rather less dull than the Wembley showpiece last May.

Those managers will be looking, hoping and probably praying for a reaction from each of their sides. Maurizio Sarri has spent the last week reeling from Chelsea’s 6-0 humiliation at Manchester City – more on that later – while United are licking their wounds for the first time since Ole Gunnar Solskjaer walked in to brighten the mood at Old Trafford.

The Champions League defeat to PSG, one of the biggest tests Solskjaer was hoping to pass in his pursuit of the permanent job, raised many more questions than answers, and Ed Woodward and his cronies will be looking to see if the Norwegian has the response.

The task of regaining some momentum is not likely to be made any easier by the likely absence of two of their attacking trio. Losing Anthony Martial and Jesse Lingard halfway through the defeat in midweek had a catastrophic effect on United, who lost the speed and energy required to cause PSG problems at both ends of the field. Solskjaer may have to bring in Romelu Lukaku, a move which brings its own problems at the moment, rather than turn again to Juan Mata and the ‘disgrace’ that is Alexis Sanchez, but at least United have a blueprint for causing Chelsea problems. In one of the few adventurous moves made by Jose Mourinho, his United side attacked Chelsea at Stamford Bridge for long periods before eventually retreating and paying the price with a late equaliser.

Manager to watch – Maurizio Sarri
Sarri’s fight for his job is rather more desperate than Solskjaer’s. At least the Chelsea boss has nearly seen out the week, which is longer than some people gave him after the embarrassment at the Etihad last Sunday.

“The last match wasn’t a problem of motivation,” said Sarri on Wednesday, without going into detail to offer an alternative. “In the first four or five minutes we started well. We were not able to react.”

Sarri has hardly set an example for his players when it comes to that reaction. So wedded is the Italian to his style of play and his methods that he appears utterly unwilling to consider any alternative. Even while his masterplan is being torn to pieces – as it was by City and, more worringly, Bournemouth – he refuses to opt for a Plan B or even acknowledge the need for one.

Chelsea have conceded 12 and scored none in their last three domestic away games. Of course, they rattled five past Huddersfield before surrendering to City but the Blues boss then was clearly still seething from the Bournemouth capitulation. “I hope in the future we will not need a lost match to find the right mentality,” he said after tonking Town 5-0. A week later City scored six to confirm that Sarri is yet to find a fix.

It is not entirely his responsibility. Players, especially those at Chelsea, find it too easy to hide behind the manager, but some of the individual ineptitude evident at the Etihad was almost on a par with the kind we saw from Monday’s opponents when they downed tools for Jose Mourinho.

So a reaction – another one – is a must for Chelsea. If it is not forthcoming, Sarri might start making plans for his pay-off.

Team to watch – Manchester City
The unusual lack of giants still standing by this stage makes a potential giantkilling harder to come by. But one tie retains some of that FA Cup authenticity, with Pep Guardiola taking his champions to south Wales and the primitive surroundings of Rodney Parade to face a middling League Two side.

The minnows from Newport have form for bloodying bigger boys’ noses. Leeds (pre-Bielsa), Leicester and Middlesbrough have all been sent home with their tails between their legs in the last year or so, while Tottenham only avoided humiliation thanks to a late equaliser from Harry Kane.

Mauricio Pochettino doesn’t give many f***s for the domestic cup competitions, but the 16 goals City put past Rotherham and Burton within four days suggests Guardiola sees rather more value in bothering with the FA Cup and the Carabao Cup, the final of which comes next week.

With that and Schalke in the Champions League more immediately on the horizon, Guardiola has a delicate balance to strike between progression and preservation. Presumably he will hope to achieve both, meaning the likes of Sergio Aguero and Kevin De Bruyne will be kept back unless they are needed to aid City in an emergency, but the Rodney Parade arena is perhaps not the time to be blooding the likes of Eric Garcia, Philippe Sandler and Ian Poveda en masse.

Sandler and Garcia both featured in the second leg at Burton but so too on an icy pitch did Aguero and De Bruyne. That suggests Guardiola will go stronger with the hope of being able to ease up, rather than the reverse.

Here you go Pep:
Pitch report for Rodney Parade with 3 days until #Newport v #ManchesterCity in @EmiratesFACup.
TWO rugby teams share pitch.
The going is “Soft to not good” pic.twitter.com/G3Hl3tqUfi

Player to watch – Ashley Cole
Chris Hughton acknowledges that the flurry of Premier League fallers makes the FA Cup “a great opportunity for somebody” but both Brighton and Derby may find it impossible to avoid being distracted by league concerns. Albion’s run of one win in 11 have left them three points off the Premier League drop zone, while Frank Lampard might be forgiven for remaining preoccupied by County’s play-off push.

With that in mind, Lampard may see the trip to the AmEx as a decent opportunity to give Cole his full Derby debut. Lampard tinkered with his XI at rock-bottom Ipswich on Wednesday night and the rookie boss was criticised when the Rams dropped two points. With only one rest day between road trips, Lampard could feel the cup tie is a more suitable time to give Scott Malone a rest and Cole a first start back in English football.

The 38-year-old said he was fit enough at the start of the month, since when he has played just a single minute as a substitute against Hull last week. He watched the draw at Portman Road from the bench and with big games against Forest and Villa coming up next, Lampard must be keen to see what Cole can still do. We are.

Lampard is certainly not afraid to rotate his left-backs. As well as Malone, Max Lowe, Craig Forsyth and Andre Wisdom have all had a crack at nailing down the position. Cole is knocking on, but the LA Galaxy Player of the Season in 2018 – admittedly, it wasn’t a crowded field – will fancy his chances of seizing his opportunity when it comes.

Football League game to watch – Sunderland v Accrington Stanley
If the FA Cup’s opening offerings this weekend aren’t floating your boat, then Sky Sports have an alternative in the form of the League One promotion battle and two games featuring a couple of sides looking to make up ground on the top two.

On Friday night, Sunderland will probably be drawing 1-1 with Accrington Stanley if their recent form is anything to go by. That has been the scoreline in five of the Black Cats’ last six league games, with the other finishing 1-0 to Jack Ross’s side. They haven’t scored more than a single goal in a league game since December 15 – 10 matches ago.

Portsmouth are on a similar run. Kenny Jackett’s men haven’t won since New Year’s Day and three wins in 11 League One games have seen them slip from the summit to third. Their fall would have taken them further from the promotion places had Sunderland not developed a taste for ties. A first win in six is badly needed when Pompey go to Southend on Saturday lunchtime.

European game to watch – Atalanta v AC Milan
Fourth goes to fifth in Serie A on Saturday evening when Milan make the journey to Stadio Atleti Azzurri d’Italia. Even with the final Champions League spot up for grabs, if the stakes don’t grab you, it might be worth tuning in to watch Krzysztof Piatek and Duvan Zapata go toe to toe.

The Polish striker is only four games into his Milan career but so impressive has he been that Adriano Galliani has already likened him to a Rossoneri legend: “Piatek reminds me of Sheva, I immediately thought that as soon as I saw him. My dream is that Piatek and Paqueta can become the new Sheva and Kaka.”

#Paqueta in the making… pic.twitter.com/UTrsRcEO9L

Atalanta won’t be willing to play the patsies on Saturday night as they continue their round trip from the top of Serie A towards the bottom and back again. Gian Piero Gasperini’s side finished the opening weekend at the Serie A summit before a failure to win in their next seven saw them plummet to one place above the drop zone. That was their rock bottom. One defeat in their last nine has seen Atalanta rise up the league table and another win over Milan will see them usurp Gennaro Gatusso’s men from fourth place.

Piatek isn’t the only one on fire. Zapata is on an even hotter streak, with 16 goals in his last 13 matches. The Colombian’s form has helped Atalanta notch an average of 2.7 goals per game during their recent run, with three more knocking holders Juventus out of the Coppa Italia. With Lazio and Roma also breathing down Milan’s neck, it is quite possible that Gatusso’s side could finish the weekend in seventh and outside the European places altogether.