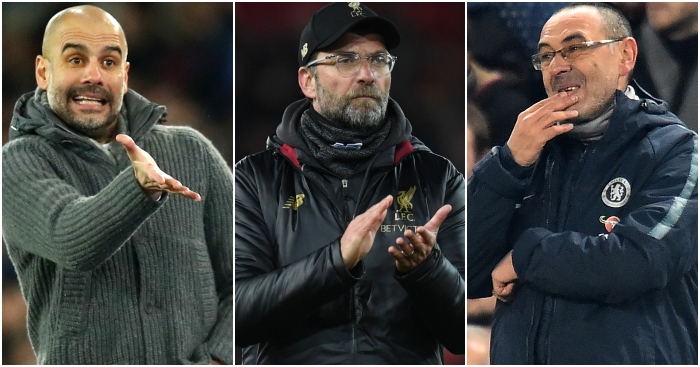 Game to watch – Manchester City v Chelsea
Managers only ever talk about finals in the literal sense, or sometimes the plural when trotting out the cliche about every game being akin to one. But Pep Guardiola didn’t bother to downplay the significance of the visit of Chelsea on Sunday: “This is a real final.”

It certainly concludes a week the like of which City won’t face again this season, at least not in the Premier League. Before the visit of Arsenal last Sunday, Guardiola’s side trailed Liverpool by five points. With the Gunners dealt with and Everton beaten, City are top again, even if it is by virtue of having played a game more. But the significance of hitting the front once more has not been lost on anyone in Manchester or on Merseyside.

The momentum and the odds have swung back in City’s favour, thanks in no small part to Liverpool’s blip, but largely because of the champions’ reaction to their own aberration in December. Since losing to Crystal Palace and Leicester, City have won ten out of 11. Even if they aren’t the most in-form side in their own city, beyond Greater Manchester and throughout Europe, no one else can match the Blues’ recent run.

Will their exploits catch up with City? Guardiola admitted “the performance is not as good as we expect” at Everton but his players could not be faulted for their application or attitude. They will need grit in the coming weeks because even though City have a free week before a trip to Newport in the FA Cup, February remains frenetic, with an actual final and two last-16 cup clashes in addition to a visit from a West Ham side that gave Liverpool a headache on Monday night.

City had to recover their momentum after initially losing it against Sunday’s opponents. Chelsea have themselves been in a habit of late, though not one which Maurizio Sarri appreciates. Unlike many of his Premier League counterparts, the Blues boss was reluctant to accentuate the positives from the 5-0 win over Huddersfield last week, instead keeping hold of his stick rather than reach for the carrot by telling his players that he expects similar focus to be applied every week, not just in the wake of defeat.

The presence of Gonzalo Higuain makes Chelsea a tougher proposition compared to the last couple of occasions they have faced City. Eden Hazard was asked to play as a false nine during the win at Stamford Bridge two months ago, and last season when Antonio Conte’s side offered no danger to the City goal (seemingly because they chose not to). With a genuine threat through the middle and Hazard playing from deeper, the second-best defence in Europe over the last ten games can expect a busier afternoon than many they have had at the Etihad.

Team to watch – Liverpool
They’ve sh*t it, haven’t they? Well, no. But a win on Saturday afternoon is an absolute must after two hugely disappointing draws in five days last week.

Where there was giddy anticipation ahead of their last home game, which could have taken them seven points clear at the top of the table, the visit of Bournemouth comes amid an atmosphere rather more pessimistic after Jurgen Klopp’s side were pegged back by Leicester and West Ham.

None of us outside of Anfield know whether this has merely been an unfortunate blip or the consequence of nerves as the Reds get within 12 games of their first title in 29 years. Andrew Robertson insisted it was merely the former, but the only way to dispel the latter theory is to turn over Eddie Howe’s men and change the tone before another ten-day break ahead of meetings with Bayern Munich and Manchester United.

Klopp can’t blame fatigue – the Liverpool players had 11 days off prior to the Leicester draw. The manager took his squad to Dubai in the hope of coming back with an answer to his right-back conundrum but neither Jordan Henderson nor James Milner have been a success in the role, with Milner’s absence from the midfield more obvious than his input from full-back. Fortunately for Klopp, Trent Alexander-Arnold looks set to be available this weekend, meaning Milner can step forward if Henderson and Georginio Wijnaldum remain on the sidelines.

Leicester and West Ham have caused problems for the other big boys too but Bournemouth have generally been very accommodating of the Big Six this season. The Cherries have lost seven of their eight meetings against the Premier League’s best and though they arrested a losing run by beating a dreadful Chelsea side at home last week, they then followed that by losing at Cardiff. Bournemouth may be in the top half – just – but that certainly isn’t a consequence of their away form.

Still, the Cherries may be encouraged by the fact that the Liverpool defence – still the Premier League’s stingiest – have kept only one clean sheet in their last seven outings. And even that is not Klopp’s biggest concern. It is his midfield, one assembled at a cost of £120million, that will be giving him sleepless nights before a match far more important than it appeared at the start of last week.

Player to watch – James Maddison
The Leicester midfielder perhaps has a point to prove to both managers at Wembley on Sunday lunchtime.

Maddison, signed from Norwich for £24million last summer, has been one of the biggest plusses for Leicester this season, with the creative midfielder scoring five and laying on four goals in his maiden season in the top flight. It was enough to earn the 22-year-old a senior England call-up but his form doesn’t yet appear to have earned Claude Puel’s full trust.

The Leicester boss was left in no doubt about the feelings of the Foxes faithful on Sunday when Maddison was hooked again, with the playmaker making his most premature exit of the season, aside from when he was substituted at half-time of the defeat to Palace in December due to injury. United were probably glad to see the back of Maddison. In a game that peaked inside the opening 20 minutes, he was one of the brightest lights, and Leicester were certainly no more creative in his absence.

Presuming he starts at Wembley, Maddison may well be out to catch Mauricio Pochettino’s eye too, if he hasn’t already. Reports this week suggested that Maddison was among the players being eyed by Spurs ahead of a summer transfer window in which they are expected to actually buy some players. They won’t have a choice if Christian Eriksen opts to seek a challenge away from north London with 12 months remaining on his contract, and Maddison also ticks the ‘home-grown’ box.

It would be fascinating to observe what Maddison could do in a Spurs side geared up to attack in contrast to his current side’s counter-attacking approach. For now, we’ll have to have to make do with seeing what he can do against it.

Manager to watch – Marco Silva
As if he didn’t have enough to worry about, the beleaguered Everton manager returns to Watford this weekend, where the home fans can’t wait to pile the misery on their former boss.

Silva has watched his new side lose seven of the last ten in the Premier League and when you chuck an FA Cup defeat into that mix, it is not hard to see why the Portuguese boss is already coming under intense scrutiny. His latest attempt to change their fortunes involved making five changes to his starting XI against Manchester City and while they reaped an improved performance, they lost again while conceding yet another set-piece goal.

The Everton boss isn’t helped by the timing of his return to Vicarage Road, nor the fact he goes back there one place below the Hornets. Troy Deeney urged Watford fans to ease off on Silva and instead “let us kick the sh*t out of them”, while chief executive Scott Duxbury admitted he has no intention of personally making the former boss feel welcome. Another defeat and Silva will struggle to find an ally anywhere on Saturday afternoon.

While the performance was more encouraging against City, Saturday is all about the result. The Toffees might not slip lower than ninth because the three teams within touching distance below them all face tricky away trips, but Watford could establish a four-point cushion between Everton and eighth. That would be an uncomfortable position for Silva to sit with 17 days before their next game. Perhaps he has that time earmarked to work on defending set-pieces and find a way to unlock again Everton’s potential, but Silva is expected to produce solutions before their mid-season break.

Football League game to watch – Norwich v Ipswich
The East Anglian derby brings together two Championship sides who couldn’t be further from each other.

Norwich are sitting pretty at the top of the table following last week’s hugely-impressive win at Leeds, while Ipswich remain rooted to the foot of the table having discovered that life after Mick McCarthy isn’t all it was cracked up to be.

McCarthy’s replacement Paul Hurst mustered just a single in 14 games in charge while the latest man to have a crack at filling Big Mick’s shoes, Paul Lambert, has managed only one more victory than Hurst in the same number of matches. Hurst at least took a point from the one derby clash he presided over though it seems likely that Lambert’s Town XI for his return to Carrow Road will feature only two survivors from that 1-1 draw in September: Cole Skuse and Matthew Pennington.

Whatever side Lambert chooses in whichever shape, given they are eight points from safety, optimism among the Tractor Boys of a first derby win in almost 10 years is desperately thin on the ground, with the next opportunity to break that run likely to be against City Under-21s in the Checkatrade Trophy next season.

That pessimism comes in sharp contrast to the feeling at Carrow Road. Norwich went to Elland Road and deservedly dethroned Leeds as league leaders last Saturday evening and the derby provides some insurance against any feelings of complacency that might have crept in. There should only be one winner, but, y’know… football.

European game to watch – Atletico Madrid v Real Madrid
After a frankly bizarre start to the season, La Liga is starting to resemble its usual self, with Barca and the two Madrid sides occupying the top three spots. Real currently sit in third place and, after clawing their way back up from ninth, Santiago Solari’s side can claim second spot from Atletico as well as the local bragging rights when they go to the Wanda Metropolitano on Saturday afternoon.

Real will take encouragement from a Copa del Rey Clasico on Wednesday night, when they held Barca to a draw in the Nou Camp, where they were smashed 5-1 earlier in the season. Just as Real are beginning to build momentum, Atletico lost theirs last weekend when were beaten 1-0 by Real Betis – their first La Liga defeat in five months.

Alvaro Morata’s presence, presumably, was a coincidence. The on-loan striker drew a blank on his debut when Atletico missed the chance to gain on Barca, who drew with Valencia earlier in the day. It leaves Diego Simeone’s side looking over their shoulder at Real ahead of the derby, rather than focusing on reining in Barca.

Of course, given the 3:15pm kick-off time on Saturday, if you do want to watch the most intriguing clash on the continent this weekend, you will have to go searching for it in some of the darker corners of the internet. Godspeed.