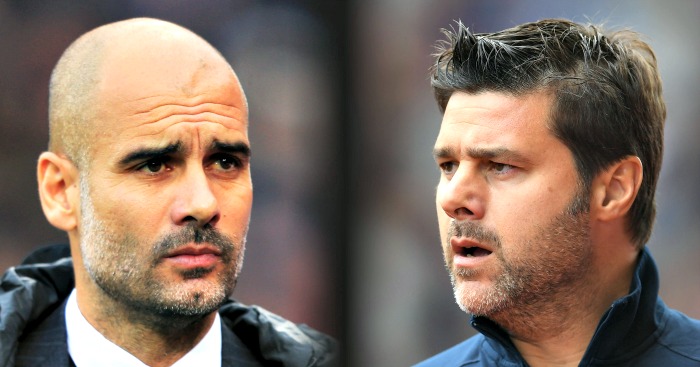 Game to watch – Manchester City v Tottenham
Only those with a leaning towards the red sides of Manchester, north London and even Merseyside would begrudge Pep Guardiola or Mauricio Pochettino due credit. For the majority of everyone else, City v Spurs represents the best of what the Premier League currently has to offer.

We are not the only ones buzzing for this particular match up. Guardiola described it as “an amazing test” for his runaway leaders, while Pochettino was almost giddy at the prospect of going to the Etihad on Saturday evening with Spurs having rediscovered their mojo; 10 goals in three straight wins have followed just one victory in five.

“I’m so excited to play,” the manager said after the midweek win over Brighton. “Because I love to play against teams and managers like Guardiola, that are the best. I’m so motivated and so happy that we are going to play a team at their best.”

Pochettino’s tone suggests Spurs will try to attack City like they would anyone else. And Guardiola acknowledged that possibility: “They don’t expect the other ones, they want to make their own game.”

It won’t have escaped the Spurs boss’s attention, though, that prior to the 4-0 trouncing of Swansea, who opted to have a go at Guardiola’s men, City were pushed to the brink by their previous four opponents, who all sat deep and tried to play on the break. Ultimately, City’s quality told in all four one-goal wins – they also rode their luck – but do Spurs really fancy their chances of going toe-to-toe with the leaders?

Probably. Their best displays this season have come against some of their better opponents – Liverpool and Real Madrid – and Pochettino will take heart from the fact that Spurs were the first side to beat Pep’s City last season, when Guardiola’s men also gave up a two-goal lead in a draw at the Etihad.

Brave or naive? We’ll have a great time in finding out on Saturday evening.

Player to watch – Jack Wilshere
The Arsenal midfielder made his first start for Arsenal in 577 days and duly completed his first 90 minutes for the club since September 2014 at West Ham, where he made a positive impression on the right of Arsene Wenger’s midfield. Will the manager pick him again? There’s no reason not to, but, well, Wenger…

At the London Stadium, Wilshere took care of the ball, with the 24-year-old finishing the night with the best pass completion rate of any starter. But, to the right side of Granit Xhaka, it was the defensive aspect of Wilshere’s game that pleased the manager most.

Against Newcastle, who’ve claimed just a single point in their last eight games and appear bereft of all confidence and belief, Wenger could give Wilshere an opportunity to showcase his more creative talents. He may even opt to rest Xhaka after a wretched display at the London Stadium, giving Wilshere his preferred platform in the centre. If so, it’s a chance the midfielder has to take. Time is running out for the academy graduate to prove himself worthy of the new contract Arsenal have yet to propose but having demonstrated glimpses of his talent in the Europa League, a run of form in the Premier League will soon bring the Gunners to the table.

Team to watch – Newcastle
Newcastle are a club in limbo, with everyone just waiting for a positive update on protracted takeover talks. In the meantime, the team has hit the skids and Rafael Benitez appears to have no answer to their decline, other than waiting for January in the hope of being able to sign some players.

Benitez retains the support of the vast majority of Tyneside, and those who back him will say that his soundbites during a run that has seen them lose seven and draw the other of their last eight matches have simply been realistic. More sceptical observers may see his tone as rather more defeatist and the one of a manager looking to cover his own tracks. Whichever it may be, Benitez cannot afford to let the slide go unchecked into the new year.

We keep hearing that the current squad lacks the necessary quality to compete at this level and an illustration of that is the fact they are currently two points short of the tally Steve McClaren’s sorry lot had gathered by the same point two seasons ago when they were relegated. But January isn’t going to allow Benitez to completely overhaul his options. The manager needs to start rinsing more out of the group of triers currently at his disposal, starting at the Emirates.

The midweek defeat to Everton may lead to the return in goal of Rob Elliot, who was dropped a few weeks ago for reasons as yet unknown. Benitez’s team selections in general have become harder to guess while their slide has gathered momentum, but at Arsenal it seems likely that the Magpies will retain the 4-2-3-1 that at least gave them the appearance against the Toffees of being harder to break down. Jamaal Lascelle’s return is to be celebrated, and the skipper will be needed in the coming week.

To achieve Benitez’s target of 20 points by Christmas, Newcastle need two wins from their trips to the Emirates and West Ham. As unlikely as that may seem, a positive start to a period in which 15 points are up for grabs before January 1 is desperately required.

Manager to watch – Mark Hughes
Our early loser during midweek could be losing his employment this weekend should the home game against West Ham go awry. Would anyone shed a tear?

Hughes is currently the fourth-longest-serving manager in the Premier League but familiarity has bred contempt among the Stoke supporters weary of the lack of progress being made under the Welshman. Of course, Hughes is almost always armed with excuses.

They failed to trouble Burnley on Tuesday despite the Clarets turning in perhaps their poorest performance of the season. “On 40-odd stats we looked at we should have won,” said Hughes on Thursday, suggesting a lack of luck rather than motivation, quality or organisation was to blame. “But that’s the score at the top of the page, 1-0 to Burnley.”

Quite what Hughes is basing that final statement on, who knows? But Stoke have fallen short of even that minimum of demands too often of late. The capitulation at Tottenham last week was cowardly and the Burnley performance offered little more encouragement that Hughes’ players were doing their utmost for the manager. He has bemoaned their frailties at the back but the easiest way a manager can effect a team on the pitch is to make them hard to beat.

Hughes seems unable to grasp that Stoke’s shortfalls are ultimately his responsibility. An equally inept display at home to the Hammers on Saturday could leave him with a lot more time to ponder his shortcomings.

One-on-one battle to watch – Kyle Walker v Danny Rose/Ben Davies
Kyle Walker and a fully-fit Danny Rose dragging each other up and down the Etihad touchline would have been a thrilling battle but, regardless of what the Spurs left wing-back might say, he remains some way off his best following a 10-month lay-off. Rose has started Tottenham’s two recent midweek matches but Pochettino is expected to restore Davies to the side for the trip to City.

That makes sense. Davies and Kieran Trippier on either side offer Spurs a better balance and more defensive solidity, which they will need in spades against the rampant leaders. But Davies’s tally of three assists so far this season is bettered only by Trippier and Cristian Eriksen, which highlights the importance of the wing-backs in Spurs’ attacking blueprint.

So Walker may spend more time in his own half than he has become accustomed to, but Guardiola will still expect his right wing-back to perform his attacking duties. Under different managers, you might see Walker and Davies cancel each other out, but instead we should see a Saturday night slugfest.

Football League game to watch – Derby v Aston Villa
Fourth-placed Derby and Villa in fifth are separated by one position by virtue of one point and a single goal on goal difference so their Pride Park meeting promises to be a tight affair.

The two Midlands big-hitters have endured then enjoyed similar seasons so far, with both sides recovering from poor starts to gather some momentum and ascend to the play-off zone. Derby’s climb has included four wins out of their last five, while Villa’s progress has been checked somewhat by two draws in their most recent outings against Leeds and Millwall.

For Villa to climb above the Rams, without their captain John Terry, the visitors will have to keep Matej Vydra quiet. Derby’s record signing has settled into the No.10 role under Gary Rowett and he is currently the Championship’s joint second-highest scorer on 12, though he has comfortably the best minutes-per-goal ratio in the division, netting every 91 minutes, with six goals in his last six matches.

European game to watch – Borussia Dortmund v Hoffenheim
Hoffenheim boss Julian Nagelsmann, 30 (thirty), has had to deny on several occasions over recent days having had any contact with Dortmund as speculation persists he will take the BVB job in the summer.

Typically, though, the young coaching prodigy will come face to face with Dortmund this weekend when Hoffenheim head to the Westfalenstadion on Saturday evening. The hosts will be aiming to leapfrog Nagelsmann’s team into fifth place as they look to build on their first win in 10 attempts last week following Peter Bosz’s sacking in a season CEO Hans-Joachim Watzke described as “a mystery”.

Watzke has also left the Dortmund players in no doubts over how much of the blame they must share for their recent struggles. With four points separating second and eighth place in the Bundesliga, they have time and now motivation to salvage their season under Peter Stoger. The former Cologne coach is determined to seize his “once-in-a-lifetime opportunity”, especially against the young pretender supposedly already lined up to replace him next summer.