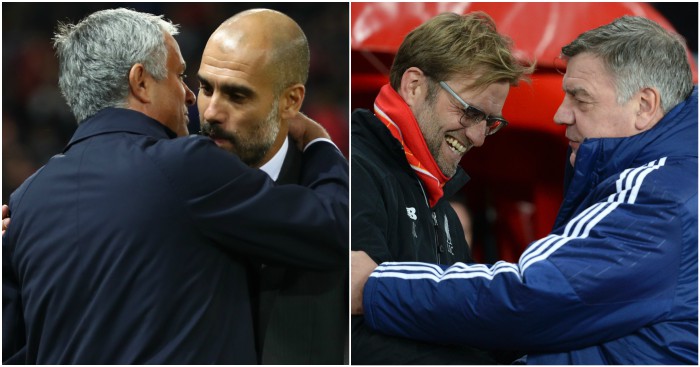 Game to watch – Manchester United v Manchester City
The earliest ever title decider? City can move 11 points clear of United by replicating their derby victory at Old Trafford last September. Does anyone really believe that Pep Guardiola’s side would surrender what would be a four-game advantage in the 22 matches that would remain after Sunday? They’ve just won their last 20 prior to Wednesday night’s Champions League dead rubber defeat in Ukraine.

Of course it is possible, but highly unlikely, which Jose Mourinho will be well aware of. If United are to eat into City’s lead, then the six points they have to fight for between themselves seems the best place to start.

Which makes Mourinho’s approach all the more fascinating. Last week’s victory at Arsenal gave us a hint as to what to expect, with the Gunners seemingly claiming the moral victory after converting one of 33 shots but United taking the actual points with a display of robust defending and clinical attacking.

Chances are, United will employ a similar plan. City’s last three victories have demonstrated their resolve and will to win, but they have also offered Mourinho some ideas on how best to keep the derby rivals at bay. Huddersfield, Southampton and West Ham all defended deep and were successful in frustrating City until the leaders eventually wore them down. United, with the best defensive record in the league, are far better equipped to defend their goal than anything City have faced recently, and of course, when City do break through their ranks, David de Gea lies in wait.

When United get the opportunity to break, just watch them go. Some of their attacking play of late has been scintillating, though their improvement in that respect just happens to have coincided with Paul Pogba’s return. The fact he is suspended is a blow to Mourinho, and indeed anyone watching without a leaning towards City. But with Jesse Lingard, Anthony Martial and/or Marcus Rashford flying forward behind Romelu Lukaku, United have an abundance of pace – the one thing Vincent Kompany (if fit) and Nicolas Otamendi fear.

City’s other weakness just so happens to be one of United’s strengths: set-pieces. Mourinho has assembled a squad of imposing physical specimens and Guardiola knows it: “We spoke a lot about defending set-pieces but they are taller,” he admitted after last week’s win over West Ham. “It will happen again against United so we have to try and concede fewer set-pieces.”

A draw would suit City just fine but Guardiola’s side don’t know how to play for anything other than a win – unless they simply decide just to keep the ball without risk of losing it, though we all know Pep won’t take that approach. It might not be a thriller, like United’s trip to Arsenal, but it sure will be fascinating.

Player to watch – Philippe Coutinho
Allardyce might park the Everton bus, but Coutinho knows where the spare key is kept.

The Brazilian has been in sparkling form of late, with a Champions League hat-trick following on from a performance at Brighton that Sarah Winterburn described as “probably his finest of the campaign”. He finds himself back in the headlines on Thursday having failed to dampen the speculation around a possible move to Barcelona, but Liverpool fans should forget fretting about whatever the Brazilian’s current motivation is and just enjoy the show that he will be determined to put on in the derby.

From a deeper position, Coutinho is finding the pockets to pick passes for the devastating front three of Mo Salah, Roberto Firmino and Sadio Mane ahead of him. The former Inter playmaker leads the way at Anfield for assists while also chipping in with his fair share of goals. He is one of only a half dozen players to have at least four goals and four assists this season.

With Everton set to defend deep and deny Liverpool space behind them to exploit, Coutinho is likely to see much of the ball. Whether he can pass or carry it through the Toffees’ lines will go a long way to deciding the outcome of the derby.

Team to watch – West Ham
“It’s been good under the new manager,” said Mark Noble this week, despite the fact West Ham have lost three and drawn one of the four games that David Moyes has presided over. “He’s set a stall out for how he wants to play. Some of the performances have been really good but the results haven’t gone the way we wanted. You can slowly see it turning around.”

At least the Hammers showed they haven’t completely lost their appetite to defend during a stubborn performance at Manchester City. No-one expected much from the Irons last Sunday, especially after the surrender at Everton a few days previously, so the City trip was basically a free hit.

The expectation of the home fans will be far greater at the London Stadium against their friends from Chelsea. The atmosphere at West Ham’s home games has been toxic enough so far this season and given very few wanted the manager they have been given, a poor performance or a derby defeat on Saturday lunchtime won’t do anything to appease the dissenters. Moyes desperately requires a win, one which he seems set to go in search of with Adrian rather than Joe Hart between the sticks. But, with two goals in four games, it is at the other end that the new manager must also provoke an improvement if the champions’ defence is to be breached. Under normal circumstances, the Hammers would have taken a point against Chelsea, but Moyes still needs three just to get his feet under the table.

Manager to watch – Sam Allardyce
Big Sam has most probably spent the week rubbing his hands together in anticipation of the derby. He certainly hasn’t been in Cyprus with Everton’s second string, instead staying on Merseyside to drill his new first-team troops into something resembling a coherent defensive unit, knowing full well that a positive result in the derby would be the best possible start to his Goodison reign.

As well as the local bragging rights, Allardyce and Klopp “have kind of a history”, as the German alluded to last week. He was referring to Liverpool’s win at Sunderland two years ago, when Big Sam called Klopp “a soft German” after the game got a bit tasty. For Allardyce, it’s hard to think of anything he might enjoy more than a pint of wine after establishing himself in his own mind as the new king in town by getting one over on Klopp on his own patch.

For that, his plan is a simple one. Defend deep, force Liverpool down the sides and play conservatively on the counter. Nothing sophisticated, of course, but it has worked for Allardyce before, as it has for the precious few visitors to Anfield this season that have left with something other than a good shoeing.

One-on-one battle to watch – Raheem Sterling v Marcos Rojo
There are so many match-ups in the derby to relish but given the shape both sides are expected to take, it will come down to units more than individuals. City stopping United’s pace will require a team effort, but keep the popcorn handy if Martial can get a head of steam against any of the visitors’ centre-halves.

At the other end, Ander Herrera and Nemanja Matic against David Silva and Kevin De Bruyne will be a feast for the eyes, but Raheem Sterling is City’s hottest current star. On the right of front three, he will provide Marcos Rojo with perhaps not only his biggest test of the season, but one which he must face on the back of only three starts since returning from seven months on the sidelines.

“He really needs the rest,” said Mourinho in midweek when an enquiry was made as to why Rojo was missing from the squad for the Champions League win over CSKA Moscow. Mourinho best hope that a few days in cotton wool has refreshed one of his favourite centre-halves, because Sterling is flying.

With nine Premier League goals and four assists in 13 games, the England forward has added a clinical streak to his game that few believed he was capable of prior to this season. His pace has long been feared but now opposition teams have become wary of Sterling in the box, where he had 31 touches during November – more than anyone else in the division. When he gets into those areas, Rojo will need every weapon in his armoury to stop him.

Football League game to watch – Luton Town v Notts County
It’s first against second in League Two, with only goal difference separating the sides before they meet on Saturday.

Having netted 12 and conceded one in their last three matches, the hosts sit at the summit courtesy of their prolific goalscoring record, with two teams having had seven put past them at Kenilworth Road, while Yeovil were breached eight times on the opening day. Kevin Nolan’s County side, though, have surpassed all expectations this term and the manager says they “will have a proper go” at the league leaders, just like they did at Exeter and Wycombe, where the Magpies earned big-scoring wins against promotion rivals.

European game to watch – Real Madrid v Sevilla
Saturday sees fourth-placed Real host Sevilla in fifth, with both sides on the same number of points and keen to avoid another slip up that would allow Atletico Madrid and Valencia the chance to open a more significant gap than the two and three-point cushions they currently enjoy.

Real have been maddeningly inconsistent all season, though especially of late. Their last five matches in La Liga have featured two 0-0 draws and a defeat to then-15th-placed Girona. They will face a Sevilla side, who have won seven of their last 10, shorn of defensive trio Dani Carvajal, Sergio Ramos and Raphael Varane while Casemiro is also missing. Those absences, and the fact that there has been an average of four goals per game in seven meetings at the Bernabeu over the last four seasons, suggest a dour stalemate is unlikely.