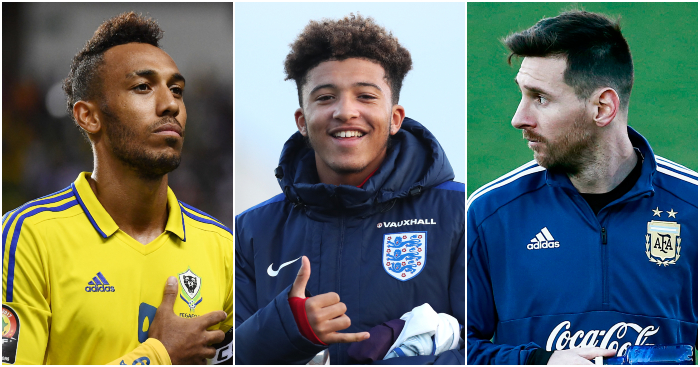 Game to watch – England v Czech Republic
It has been just five months, but it feels like an age since Ben Chilwell delivered the cross with his left foot and Harry Kane applied the finish with his outstretched right to leave Dejan Lovren gorging on humble pie as Wembley erupted in celebration.

England have evolved even since the 2-1 win over Croatia that sent them into the Nations League semi-finals. Declan Rice and Callum Hudson-Odoi are the latest additions to a squad that has retained that fresh feeling, with Gareth Southgate selecting more players born in the year 2000 than in the 1980s.

Granted, it is still a flawed side, but it is an interesting and intriguing kind of flawed. A relatively bland midfield has had youth, aggression and supreme free-kick-taking abilities injected into it, while the attacking options are fast, skilful, direct and genuinely threatening.

Jadon Sancho is in line to make his first competitive England start, but Southgate would be forgiven for treating Friday’s game against the Czech Republic as something of a tribute to last summer, reverting to the three-man defensive system that reached the final four of the World Cup.

The manager had started to move away from that formation but a combination of Michael Keane and Harry Maguire being their only available centre-halves and Kieran Trippier being just terrible at defending could see Kyle Walker reprise the role he played at Russia. It would likely force Sancho onto the bench, with Dele Alli starting behind the ridiculously in-form strike partnership of Harry Kane and Raheem Sterling, but the nice thing is that England finally have options.

Their opponents at Wembley have won five and lost five of their last ten games, with Jaroslav Silhavy faring well since being appointed Czech manager in September. Patrik Schick and Matej Vydra are capable of asking difficult questions, not that England’s defence needs to panic about this particular exam.

The Three Lions are unbeaten in 30 World Cup and European Championship qualifying games, dating all the way back to October 2009. They have also not failed to win their first game of a qualifying campaign since a 2-2 draw with Austria in September 2004.

But when the teams line up at Wembley and England sing the national anthem with renewed pride, do not doubt just how far the hosts have come. Sam Allardyce led them into their last qualifying campaign for a major tournament, with Adam Lallana scoring a stoppage-time winner in the first match. They are both remnants of a distant past for a team building towards a sensational future.

Player to watch – Pierre-Emerick Aubameyang
It was the sort of welcome you might expect the pope to receive, or perhaps the Queen, or maybe Darius Vassell upon his arrival at a relatively small Turkish club. But the reception that greeted Pierre-Emerick Aubameyang upon his return to Gabon must have convinced the Arsenal striker he had made the right decision not to retire from international duty.

After playing just three of his country’s last 11 matches across World Cup and African Cup of Nations qualification campaigns, Aubameyang was certainly contemplating his future. He effectively pulled out of the last Gabon squad in protest at what he felt were substandard facilities, later criticising the FA for failing to make news of a subsequent injury public.

“I am thinking hard about retiring from international football,” Aubameyang confirmed earlier this month. “I am hesitating because I want to make matters improve.

“I am waiting for changes to be made,” he continued. “We always end up in the same situation on the eve of matches, asking questions we shouldn’t need to ask. I want football to become more professional in Gabon. It is what the players deserve.”

If anyone can enact that change, it is Aubameyang. The 29-year-old deserves praise, not admonishment for trying to use his position to take a stand for the betterment of not only himself but his peers. It was a brave step to take against his own country.

But the focus will now be on results, and Gabon most certainly need one on Saturday. “I would love Gabon to qualify for the African Nations Cup finals,” Aubameyang said last week, but they will need his help. Their meeting with Burundi will decide who takes the final qualification place in Group C alongside Mali.

It will be Les Panthères against Les Hirondelles; the former quarter-finalists against a side that has never qualified; Aubameyang against Saido Berahino. The man who cast himself as Arsenal’s superhero can confirm his status as a national saviour with a returning victory.

Manager to watch – Ryan Giggs
The jury is still deliberating and is no closer to reaching a unanimous decision. Ryan Giggs has lost more of his first ten games as Wales boss than he has won, with Wednesday’s victory at home to a Trinidad & Tobago side 74 places below them in the latest FIFA rankings secured only with a second-half stoppage-time winner.

Defeats to Uruguay and Spain in 2018 were understandable missteps for a team and manager still finding their feet together, but consecutive defeats to Denmark and Albania in November cast a cloud over Giggs’ first year in charge. If it is a coach’s job to construct a team greater than the sum of its parts, the 45-year-old’s inexperience was being laid painfully bare.

The problem for Giggs is that he has failed to dispel fears that the apparent nonchalance he showed towards playing for his country would translate to managing it. “I have other commitments but primarily my job is to manage Wales,” Giggs noticed earlier this month. “I’m 100% committed.

“I’ve got other commitments that the FAW knew about before I took over. For example I’ve been to Vietnam and am an ambassador for the Champions League and was in South Africa for three days last week. I’m being introduced as the Welsh manager and that can only be good.”

Taking his squad to train at Manchester United’s Carrington complex and staying at the Hotel Football facility he co-owns before travelling to Wrexham for the Trinidad game only strengthened the image of a manager failing to broaden his horizons in the right areas.

Giggs really could do with Wales starting their European Championship qualification campaign with a victory at home to Slovakia on Sunday. With Gareth Bale and Aaron Ramsey rested in midweek, a forgiving group gives the semi-finalists at the last tournament no excuses for failing to at least reach this one.

Messi is one of his country’s few remaining elder statesmen, and eleven of the latest squad have never even played with him before. He will captain them against Venezuela on Friday, but is not travelling for La Albiceleste’s game against Morocco four days later.

Argentina have won four and lost just one of their six games since their ignominious exit in Russia last summer, but this is a nation still searching for its identity after a disastrous World Cup. Who better to help them find it than the best player in the world?

Football League game to watch – Luton v Doncaster
Three draws in five games would justify accusations of ‘bottling’ or ‘choking’ for a team top of the Premier League, but not in League One. Leaders Luton have strengthened their hand with a series of stalemates that typify their fighting spirit.

Barnsley are five points behind in second, while Sunderland are a further place and two points off the pace. Their inability to close the gap means Luton can actually confirm a spot in the play-offs as a worst-case scenario by drawing at home to sixth-placed Doncaster on Saturday.

Form is not on Rovers’ side. They have drawn four and lost three of their last seven games and while they have a game in hand on their closest rivals, their grip on the final play-off place is loosening. Coventry are one point behind and in much better form.

Both heart and head suggests Luton will win to maintain their promotion charge while putting another dent in Doncaster’s. But Rovers actually won this reverse fixture at home in September, so count them out at your peril.

European game to watch – Netherlands v Germany
Germany are still reeling from the three-course meal they were served by the Netherlands last year. A 3-0 defeat in Amsterdam was the starter, Nations League relegation after the Dutch beat France was the main course, and a 2-2 draw secured by two Oranje goals in the final five minutes three days later in November was just desserts. These were two countries at the opposite ends of the international spectrum.

Germany’s response has been stark. Mats Hummels, Jerome Boateng and Thomas Muller have all been dropped and effectively retired by Joachim Low, who is following in English footsteps by naming a squad with no outfielders aged over 29. Twelve players are 24 or under, and nine have five caps or fewer.

A revolution that began in earnest in Wednesday’s draw with Serbia will see them face a resurgent Netherlands on Sunday in an opportunity to inflict some revenge. Ronald Koeman’s young and exciting side have drawn two and won three of their last five games, including a 4-0 midweek thrashing of Belarus to start their European Championship qualification campaign in style.

After the annus horribilis that was 2018, the former world champions will hope for a much better 2019. What better way to draw a line under their recent struggles than to get one over on their chief tormentors?