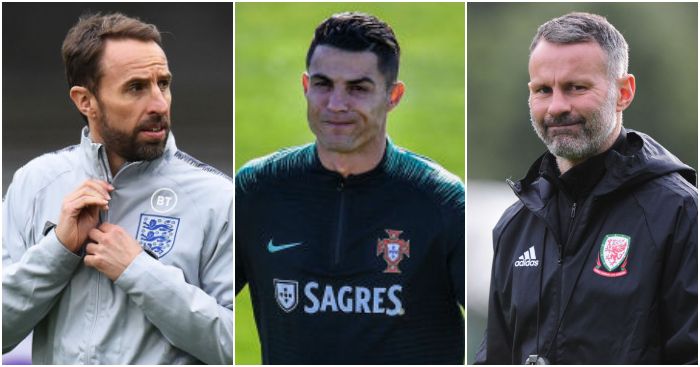 Game to watch – Czech Republic v England
A decade of unbeaten tournament qualifiers has spoiled England. In any other context, scoring as many goals as the second and third-placed teams in your group combined, having played a game less than both, would be worthy of commendation. For Gareth Southgate, that is par for the course.

The only thing that would interrupt their sleepwalk through this group is some sort of setback, a result to disturb the peaceful passage. But England look further away from such mishap as ever. Gareth Southgate has replaced maturity in years with a young squad hungry and determined to impress.

For the first time in an awfully long time there is jeopardy, consequences, a hierarchy. This side feels fresh, different.

Issues remain. A 5-3 win over Kosovo in their last game brought with it immense entertainment but a startling lack of defensive resolve. That the visitors scored from all three of their shots on target should shame Jordan Pickford, Harry Maguire and Michael Keane – if he retains his place – into some sort of improvement.

The challenge now is to maintain that electricity in attack. England have scored at least four goals in every qualifying game so far but, against Kosovo, something seemed to click further forward. It felt different to the usual sterile dominance rewarded by a first-half penalty and lucky deflection, followed by some second-half strikes to add a flattering glow to the scoreline.

So England have more forwards than and as many centre-halves as midfielders in this squad. They are far from perfect but, as the Kosovo victory showed, flawed is often more appealing and engaging – at least for the common viewer – than flawless. Be sure to Czech them out.

Player to watch – Cristiano Ronaldo
Portugal surely will earn the right to defend their European Championship crown. They are second in Group B, five points behind Ukraine and one clear of Serbia with a game in hand on both. But they host Luxembourg on Friday evening before a daunting trip to Kiev on Monday.

Their captain will want to ensure safe passage. Cristiano Ronaldo is precisely the kind of player who takes immense pride in certain statistics, so the fact he is level with Lothar Matthaus, Olof Mellberg, Kim Kallstrom and ice hockey’s Petr Cech on a record-equalling four European Championship tournaments played will mean he is more determined than anyone to stand alone on five.

The record scorer (25) in European Championship qualifying and joint holder in the competition overall (9), who has played the most matches (21) and won the joint-most games (11) in tournament finals, will want to add one more string to his burgeoning bow. With eight goals – and two hat-tricks – in his last four Portugal games, only a fool would bet against him doing so.

Manager to watch – Ryan Giggs
From an over-emphasis on counter-attacking to a promising generation of youth – with a handful of notable exceptions – being misused, down to stark underachievement, an inability to win away from home and even a reliance on Daniel James. Ryan Giggs is so invested in Manchester United, so bound by his duty to be defined by them, that he has built a Wales side entirely in their underwhelming image.

A 1-1 draw in Trnava would ordinarily be no setback. Slovakia are second in Group E and headed for qualification, and while Wales led through surprise selection Kieffer Moore, it was always likely to be a lead too slender to maintain. A point keeps their hopes alive.

But the feeling that it could and should have been so much more lingers. The defeat to Hungary in June has hampered this side, putting undue pressure on Croatia’s visit on Sunday.

Wales do not need to win to qualify. They are fourth in Group E, three points behind Slovakia and two off Hungary with Croatia further ahead at the top, having played one game less than all those above them. With Azerbaijan away and Hungary at home still to play, they can absorb a loss to the World Cup finalists and still advance.

Yet that cannot be the mindset Giggs employs in Cardiff. A positive result against a side the calibre of Croatia would transform the feeling surrounding his reign, encouraging the dissenters and giving rise to the sort of Together Stronger sentiment that helped take them to the semi-finals in 2016. This is a free-hit, an opportunity to try and unify a fractured and disillusioned footballing nation.

That was better! An adapted game plan that on the whole worked well. Clarity for the players in and out of possession.
Happy with the point but actually thought we should have won.

A different game plan needed now for Sunday but credit where credit is due to Giggs. #Wales 🔴

The Slovakia draw, away from home and with injuries to contend with, was a step forward – although the tactics after taking the lead can be questioned, as well as only making two substitutions. A statement result against Croatia at home, where they have won their last four games, would be monumental.

Team to watch – Netherlands
Even with the complex parachute of Nations League-based play-offs, Netherlands seemed determined to leap to their doom. A stunning away performance from Northern Ireland was rewarded with Josh Magennis’ opening goal in the 75th minute in Feyenoord on Thursday, and Ronald Koeman’s were suddenly in jeopardy once more.

Failure to qualify for both Euro 2016 and the 2018 World Cup cost Danny Blind his job. So do not underestimate the importance of Memphis Depay’s equaliser, nor his and Luuk de Jong’s stoppage-time goals. Netherlands, from the most precarious of positions, are top of Group C.

They are level on points with Germany and Northern Ireland, who have played a game more than their illustrious rivals. And while Joachim Low will be sniffing around Estonia on Sunday, the Dutch travel to Belarus.

Michael O’Neill will keep an eye on those games, his side ready to pounce upon any dropped points; Northern Ireland face both teams next month. For Germany, that is a sort of pressure that they will be used to, although not in these relatively uncertain times. Netherlands last failed to qualify for three successive major tournaments in 1986, so they bloody well need this.

If you’re used to Erik ten Hag’s Ajax, the Dutch NT of Ronald Koeman is dissapointing. Tactically far below par and relatively boring to watch. Malen and Van der Beek were needed, glad they’ve come on.

Coventry should win. They are fifth, have not lost at home in all competitions since March, and their 4-0 defeat to Rotherham last weekend was both an aberration and partly due to Kyle McFadzean’s red card. Mark Robins will demand a reaction.

Tranmere will be quietly thankful for Bury’s demise as the reduction of relegation positions to three means 20th is safe enough. But Micky Mellon is only barely fighting the tide after riding the crest of a wave to play-off promotion last season.

Only Wycombe (17) have won more points at home than Coventry (16) this season. Tranmere’s solitary away point was earned in August and is more than only Wimbledon and Bolton have managed on their travels. But if the camera adds ten pounds, it also multiplies the pressure and could redress the balance.

Non-league game to watch – Notts County v Torquay United
It is Non-League Day, after all.

Far be it for me to advise you to head down to Conference leaders Halifax Town as they host 14th-placed Boreham Wood if, in fact, you live in the arse end of Cornwall. With no televised game on during the division’s own dedicated day, you’re better off watching whatever team is local to you.

But if money is no object and travel is no issue, maybe head on down to Nottingham to watch Gerard Pique’s favourite club take on Torquay. Not only is it 6th against 7th, but the visitors have scored 29 goals and conceded 24 this season – no other club has seen more goals scored in their games. That’s entertainment.

European game to watch – Denmark v Switzerland
Group D, perhaps more than any other, was always going to be a three-team qualification shoot-out. With Georgia and Gibraltar filling out the numbers, the Republic of Ireland, Denmark and Switzerland were likely to step on each other’s toes.

Ireland top the group, but will be wary of the fact that both Denmark and Switzerland still have Gilbraltar to play and three inevitable points to saunter towards. So Saturday’s fixtures are absolutely crucial.

While Mick McCarthy’s side face a trip to Tbilisi that shouldn’t be underestimated, Denmark host Switzerland. The winner is almost assured of progress, while a draw should favour Ireland, who face both sides in their final two games.

Mick McCarthy had the best response to an awkward ringtone during his press conference 😂 pic.twitter.com/82kakwyYLf

Denmark are unbeaten in their last ten games while Switzerland, having lost to Qatar within the last 12 months, are enduring a slightly more indifferent run. A repeat of the 3-3 draw when these two sides last met in March would not go amiss.