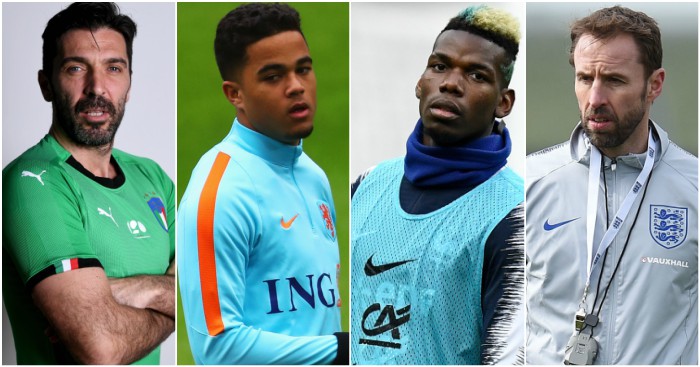 Game to watch – Netherlands v England
At some point, Gareth Southgate has to draw some conclusions from all the experimentation that goes on around the national team. And the England boss is running out of time, given this is the penultimate friendly before he must announce his long list of players for the World Cup, with the final 23-man squad having to be submitted after the friendly against Nigeria on June 2.

Southgate will have a far better idea of what his squad will look like in comparison to the make up of his team. From back to front, the England boss has decisions to make and the trip to Holland will play a huge role in his thought process.

Despite having conceded only one goal in their last six matches, including clean sheets against Germany and Brazil, the biggest question marks surround Southgate’s rearguard.

England’s goalkeeper could be any one of three, with Jordan Pickford handed the gloves in Amsterdam, while only one name – John Stones – seems a certainty in the back three. Unless James Tarkowski and Alfie Mawson freeze in their first appearances, and Harry Maguire ruins all his good work from three shut-outs in his three senior starts, then Gary Cahill, Chris Smalling and Michael Keane can start thinking about which beach they’ll watch the World Cup from. But deciding who won’t play is vastly more simple than deciphering who will.

It’s a similar poser at left-wing-back, with an opportunity having opened up for Ashley Young. In front of that backline, as well as they have done screening the defence, Jordan Henderson and Eric Dier offer between them painfully little creativity and drive. With Jack Wilshere crocked, step forward, Lewis Cook?

Things look a little clearer for Southgate further upfield, with Harry Kane’s participation in Russia seemingly assured, even if he misses these two warm-ups. The centre-forward is the only player to have found the net in England’s last four matches, so his support acts have plenty to prove in Amsterdam, with only Danny Welbeck in the current squad having hit (scuffed?) double figures.

The England forwards will have to make their point against a Holland defence that has looked similarly resolute of late. They have not conceded in their last three and, despite their World Cup qualification failure, they have won their last five matches. They also have the incentive of impressing their fourth new coach in four years, Ronald Koeman.

The former Everton manager has gone one better than Southgate in naming five uncapped players in his squad for this friendly, with Justin Kluivert the most eye-catching name among the newcomers. But the home attack is raw. Of Koeman’s squad, only Memphis Depay has scored a goal in one of Europe’s top five leagues this season.

Both Southgate and Koeman recognise that their defence can offer a solid base but the beauty is in the balance. Both teams should be looking to be more creative at the Amsterdam Arena and it should make for a more fascinating spectacle than most international friendlies, especially with the stakes so high for the visiting players.

Team to watch – Italy
The Three Lions may be on foreign soil but England, specifically Manchester, still plays host to one of the most eye-catching match-ups this weekend. And like the meeting in Amsterdam, the Etihad clash pits a fallen European giant embarking upon a rebuilding mission against one of the World Cup hopefuls, even if Argentina only just scraped through to Russia.

Italy were not so fortunate and their new era begins in Manchester. The Azzurri are taking their sweet time to appoint a replacement for Gian Piero Ventura – it seems likely they are waiting for Antonio Conte to wrap up the season at Chelsea – so Luigi Di Biagio is in temporary charge and has made a conservative start with his squad. Despite the curtain coming down on his international career after the qualification play-off disaster against Sweden, Di Biagio has brought Gianluigi Buffon back for an Azzurri encore, though the Under-21 coach resisted the temptation to roll the years all the way back to 2014 by recalling Mario Balotelli, much to Mino Raiola’s disgust.

Instead, first call-ups have been handed to AC Milan forward Patrick Cutrone and Federico Chiesa of Fiorentina. Of course, it will be a Fiorentina absentee that will be on every Italian’s mind, with this being the first international since the death of Davide Astori. Although he played only 14 times, the defender, whose No.13 shirt will remain unoccupied this weekend, was named in 58 squads and it will surely be another emotional test for the teammates left behind.

Including Astori, Di Biagio is without four centre-halves, with Giorgio Chiellini a late withdrawal; he joins Mattia Caldara and Alessio Romagnoli on the sidelines. Angelo Ogbonna was called up as a late replacement, making it three Premier League representatives in Di Biagio’s squad, though the job of stopping Lionel Messi is likely to fall to Daniele Rugani and Leonardo Bonucci.

Player to watch – Paul Pogba
“He cannot be happy with what he is going through with his club,” said Didier Deschamps of his midfielder before France’s clash with Colombia in Paris on Friday. “There must be numerous reasons.”

Chief among them is the fact that Pogba has been in utterly wretched form. Whether the 25-year-old acknowledged that during talks with Deschamps this week is anyone’s guess, but he won’t be able to pull the wool over the France coach’s eyes if the World Cup winner has bothered to watch the £89million man over the last six weeks.

At least Pogba can forget Jose Mourinho for a week or so, but on his first international appearance, the midfielder should be champing at the bit to prove a point to his club manager. Given his international absence since the 0-0 draw with Luxembourg last year, and the fact he has not been directly involved in a France goal since November 2016, Deschamps is looking for a response too.

Also looking to make the most of a break from his club woes is Alexis Sanchez. The Chile forward faces Sweden and United team-mate Victor Lindelof on Saturday, despite initially asking for permission to swerve these friendlies because of his struggles since moving to Old Trafford.

Manager to watch – Alex McLeish
“Let’s not kid ourselves, we can’t create a team who play like Barcelona,” said the manager ahead of his first game back in charge. But McLeish, as you would expect of an incoming coach, was otherwise very positive, telling his side to play with “gallus” – which we just learned means to be bold, cheeky and flashy. Every day is a school day…

But McLeish doesn’t want his young players to be thinking too much at Hampden Park on Friday. He wants them to play with the freedom of youth, not like the weathered senior pros who eventually become too bogged down by the expectation that goes with the national team.

“I’ve felt in recent years that perhaps we haven’t had that swagger,” said McLeish, perhaps forgetting that Scotland have had few reasons to be cocky of late. Costa Rica, though, may well strut into Hampden given they won the only previous meeting of these two nations – the Italia ’90 humbling from which McLeish may well still suffer ‘Nam-style flashbacks.

With the emphasis on youth and the UEFA Nations League which starts in September, in addition to a positive result, McLeish will be expecting a positive performance, one that marks a clear line in the sand between the old era and the new(ish).

1-v-1 battle to watch – Justin Kluivert v Kyle Walker
A first senior call-up for Patrick Kluivert’s boy was the headline in Koeman’s first Holland squad, with the Ajax star looking to follow in his father’s footsteps in the national team, and maybe go one better if he can net on his debut.

But Justin is forging his own path. The 18-year-old is not a burly centre-forward like his dad, rather a smaller, nippier winger. Although he does seem to have inherited an eye for goal, having scored seven goals this season in 24 Eredivisie appearances, 18 of them from the start.

The teenager points to his pace and the ability to go either side of his defender as his greatest strengths. Kyle Walker may well match him for speed, but the Manchester City right-back (or Ashley Young, perhaps, if Kluivert decides to dabble on the Dutch right) will have to get close enough to the debutant to dictate which channels he can be funnelled into. Allow Kluivert the choice and the early evidence suggests he will punish you.

European game to watch – Spain v Germany
Germany are holders and favourites to retain their World Cup this summer, though Joachim Low is more immediately occupied by the prospect of facing another “top favourite” in Dusseldorf on Friday.

No one will accuse the Germans of being under-cooked come the summer. Since qualifying for Russia with 10 wins out of 10, Low has turned up the heat on his players, with this meeting with Spain and Tuesday’s clash with Brazil coming on the back of draws against England and France.

After their last two tournament failures, Germany’s predecessors as world champions are emerging again under Julen Lopetegui. His players, who’ve scored 21 goals in five games, were told this week “there are a lot of players who deserve to join up with the national team and they are not here.” The three amigos at Chelsea – Alvaro Morata, Cesc Fabregas and Pedro – to name but three.

Still, Low has identified a Spain team that combined the best of what La Liga has to offer: “Their best 11 to 13 players come from Atletico Madrid, Barcelona and Real Madrid, uniting all these virtues. You have Atletico’s pressing game, Real’s high speed and quick counter-attack with Barca’s possession.”

The sum of those parts versus the defending world champions, is a clash for which it is well worth flicking between BT Sport and England on ITV.

Football League match to watch – Luton Town v Barnet
Martin Allen is back for a fifth time to become Barnet’s fourth manager of the season as they look to pull off a great escape. The Bees are currently seven points adrift at the bottom of the League Two table with eight matches remaining, starting at second-placed Luton on Saturday evening.

Allen wasted no time since being re-appointed on Monday in trying to provoke an improvement from his players. He has cut the squad to 20 players, changed the captain and appointed a new assistant as he embarked upon what he admitted looked like ‘mission impossible’.

But Allen takes his rock-bottom side to Kenilworth Road at an opportune time. The Hatters remain favourites to go up, but only four wins in 12 matches since an FA Cup third-round defeat at Newcastle has seen them drop into second place, with 12 wins in 14 taking Accrington to the summit.

Allen will be well aware that Luton haven’t won in five games, but they have only lost one and shown some resilience to score late levellers in three others. This will be a lot tastier than the league table suggests.