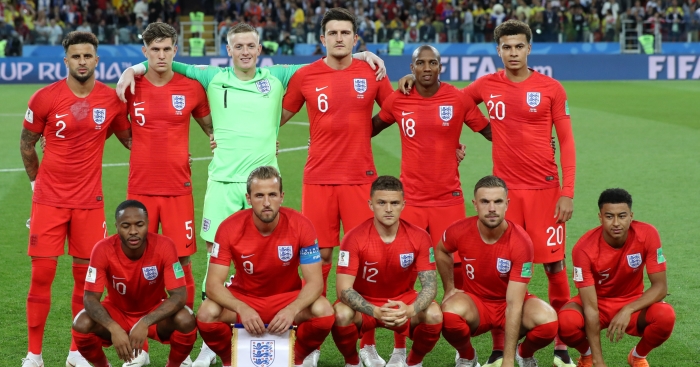 Game to watch – England vs Sweden
Before this chaotic, magical tournament began, England would have been happy with a quarter-final exit. We all said as much. This was not quite a free roll of the dice for Gareth Southgate, but part of a wider vision in which we built towards eventual major tournament success. The quarter-finals, England’s pinnacle since 1996 and best World Cup performance since 1990, would do. No criticism, no root-and-branch review, no scapegoating.

Except that it never really works like that. Expectations are never set in stone, and so they change as our experiences change. Now England are actually in a quarter-final, exit would be hugely disappointing. It is true to say that there would be no victimisation – or at least I bloody hope not – but goodwill has led to optimism, optimism has become genuine hope and hope is a short step from expectation. We can smell the semi-finals and we are desperate for this jubilation to never end.

That’s obviously a little harsh on Southgate, who might feel a victim of his own success in getting England here after the outright apathy of Euro 2016. But it should be taken as a compliment. This progression through the tournament – and yes, England haven’t beaten a very good team yet – is so enjoyable not least because it is so unexpected. We had guarded against failure, not prepared for elation.

In any case – and I cannot believe that I am tempting fate so readily – England should beat Sweden. They have more talented individual players, and Southgate has started the process of turning that talent into a team. Janne Andersson has done a fantastic job in making his own side greater than the sum of their parts, including knocking out Italy and Netherlands en route to this World Cup – but on talent alone they are outmatched.

That is not to say that England will win, nor too that there are not concerns for Southgate. I raised five questions here, but another is how England respond when they go behind. They have not won a World Cup match having conceded first since 1966, and suffered a significant lapse of belief following Colombia’s equaliser. That’s entirely understandable, but Southgate will want to eradicate it.

Saturday will not be easy. It will be long, nervous and tense again, partly because World Cup quarter-finals always are and partly because that is how England past and present do things. For all the improvement and change, some things always stay the same.

But this must – and I hope will – be seen as an opportunity to prove their strength, not hide their weaknesses. England are one victory, or one more nerve-shredding penalty shootout, away from a place in the World Cup semi-finals. After the mood they have garnered during this tournament among the country’s entire population, all we can ask is that they do themselves proud.

Player to watch – Neymar
Just what football needed really: a divisive superstar footballer who many believe allows his own ego and celebrity to cloud his judgement. Cristiano Ronaldo might have left Russia after the last-16, but Neymar is perfectly prepared to take on his mantle.

Neymar is not just the perfect modern footballer, he is a super-charged, parody version of it. It has been calculated that he has spent almost 14 minutes of this World Cup on the floor apparently afflicted by serious injury. While there’s no doubt he is subject to rough physical treatment, the reaction only entrenches the view that Neymar is spoilt. This is both extremes of the same conscience, warring with one another in a yellow shirt and blue shorts.

But see if he cares. Neymar was named Man of the Match against Mexico having scored one goal and assisted the other. While you remember him flapping about on the floor as if an elephant had trodden on his leg, Tite and the Brazilian population remember their talisman leading them into the quarter-finals.

Four years ago, Neymar suffered the back injury that ruled him out of the semi-final against Germany and the Selecao fell apart. If the team is after redemption, Neymar will be determined to make up for lost time. Play a pivotal role in knocking out Belgium, and he’ll be the new favourite for the Golden Ball.

Either way, it will be worth watching. Neymar always is, as much as you might refuse to admit it.

Manager to watch – Stanislav Cherchesov
Cherchesov’s management is by now beginning to look like a piece of performance art. Russia went into this tournament as the lowest-ranked nation with the most miserable recent results. Pre-tournament friendly defeats were endured with a central defensive three and two wing-backs, the coach insisting that this was his strategy and that he was sticking to it.

Then, against Saudi Arabia in their first group game, Cherchesov picked a flat back four and Russia thrived against weak opposition. Understandably, he stuck with that shape as Russia qualified from Group A. Any doubts that Russia might be the worst ever World Cup hosts had been quickly allayed.

Having landed on a plan that worked, Cherchesov ripped it up for the last-16 match. To the surprise and concern of Russia supporters, he went back to the central defensive three and hoped to hold out through resilient defence. Those who had watched Russia defend – and Igor Akinfeev try and save shots – over the previous two years held little hope of them achieving it. But they did.

Now we don’t know what Cherchesov will do. Croatia have been as dangerous as Spain in this tournament, but can Russia really carry out the same plan twice, hope that Croatia concede a silly penalty, score with their only shot on target and go through on penalties again? Or will the coach ask the full-backs to become wing-backs? Or even revert to the back four?

Your guess is as good as mine, but Cherchesov has surpassed all expectations in this tournament, more so than even Southgate. Rumours of Poland wanting him to replace Adam Nawalka would allow him to leave this job with his head held high. Few thought that possible three months ago.

Team to watch – France
We’ll only be convinced that Didier Deschamps is a decent coach when he’s holding that World Cup trophy aloft for the second time, but even then it will come with the caveat that this group of outrageously talented players won the tournament despite their manager, not because of him.

France were absorbing and enthralling to watch against Argentina, but for all the plaudits they won through Kylian Mbappe’s individual brilliance and even then conceded three times to a team wrought with disharmony that had lost 3-0 to Croatia and dawdled against Iceland. Like England, we still don’t really know how good France are.

Deschamps will know that his and France’s tournament will not be defined by last-16 results, but progress deep into the competition. To achieve that you need to win matches in myriad different ways.

Argentina and Uruguay might share a border, but their football teams have disparate styles. Argentina were as close to a one-man team as you could get at this level, but Uruguay are the embodiment of unity. Argentina were chaotic, every one of their matches post-Iceland a cacophonous circus. Uruguay will be far more pragmatic and far less accommodating of France’s strengths.

Head-to-head records, particularly at international level, are mostly a nonsense, covering a vast time period and involving a regularly changing cast of players and coaches. But it is interesting that the last five games between these two countries have produced only one goal in total, because it could be just as tense on Friday afternoon.

Deschamps has proven he can win the contest of attacking aesthetics against a flawed Argentina. Now he must prove that he can win the battle against Oscar Tabarez and his band of brothers. It will be damn interesting finding out the answer.

One-on-one battle to watch – Emil Forsberg vs Kieran Trippier
Trippier has a case to be considered as England’s best player at this tournament (Harry Kane’s display against Colombia notwithstanding), but he has also been dealt a good hand. Trippier has always been a better attacking full- or wing-back than a defensive one, and has had carte blanche to overlap at will in Russia.

Tunisia and Panama barely attacked at all, while most of Colombia’s play came through Juan Cuadrado (right) or Juan Quintero (central). If Quintero drifted, it was more to the right than left to try and create an overlap for Cuadrado.

Now Trippier could be tested. Forsberg is Sweden’s most talented attacking player, and prefers to start on the left and drift. That could curb Trippier’s attacking instincts and reduce his crosses into the box that have been so effective in this tournament.

Of course Southgate now feels the benefit of his back three, Walker as a natural right-back able to shuffle over and cover for Trippier if he gets caught upfield but also to look after Forsberg when he drifts infield and avoid Trippier being dragged out of position to create space in behind him.

Then there’s the flipside argument. If Trippier is so keen to attack and Walker can cover for him, Forsberg is going to have to track him or England could have a great deal of fun down the right wing. They also have an issue on the left with Mikael Lustig suspended and Danny Rose a possible starter for England.