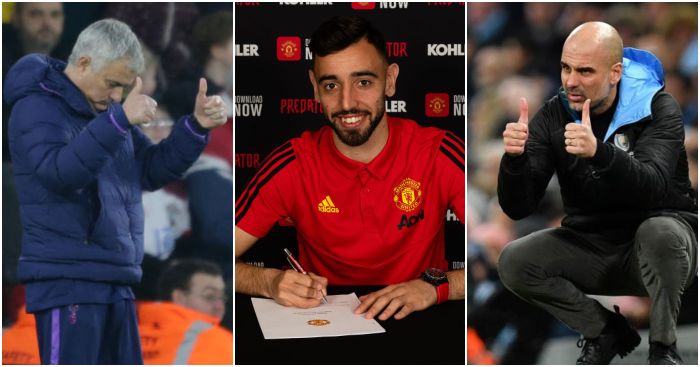 Their most recent game was hardly befitting of such a generational rivalry. A 3-1 City win, during which Anthony Martial’s consolation penalty was United’s only shot on target, sparked a run of one win in six games culminating in Mourinho’s Old Trafford sacking. The 14 months without a meeting in the interim is the longest such run since Guardiola came to the Premier League. And in truth, it has been somewhat refreshing.

Neither are in particularly fine fettle. Tottenham have stuttered to a draw and a win against Watford and Norwich in their last two games, while a City side in the midst of their most prolonged unbeaten Premier League run of the season showed a familiar vulnerability against United in midweek.

And if Guardiola was guilty of “overthinking little things” before and during a home cup tie he went into with a two-goal advantage, a reunion with his nemesis will see his tactical whiteboard struggle under the sheer weight of ideas. Tottenham unfathomably frustrated City in August and could do the same again.

Mourinho will be encouraged by the defeat to Liverpool earlier this month. The Reds were irresistible for large swathes of that game but were outshot by a Tottenham side who sought to stay competitive for long enough to create and then feast off chaos in the final half an hour. It almost worked against the world and European champions; it surely would have against an inferior side.

Enter City. They should know what to expect but that makes it no easier to combat. Tottenham will thwart and foil, sitting deep, ceding possession but starving space in the final third. Serge Aurier will be relied upon to provide width, Giovani Lo Celso to offer control and impetus and whichever poor sap they sign before Friday lunchtime to play up front – if indeed they do sign anyone – will lead the line. Steven Bergwijn will threaten a pregnable defence whether he starts or is introduced from the bench.

So the onus will be on Guardiola. He has never lost an away league game to Mourinho. Tottenham’s last Premier League win over City came in October 2016 with Harry Kane injured. Don’t be surprised if that points gap is shortened to 14 rather than extended to 20.

Player to watch – a Bruno Fernandes debut
The temptation is to ease a new signing in, to let them acclimatise, allow the dust to settle and ensure not to add to the weight of expectation. But Manchester United must discard all their old toys as soon as they can play and with their expensive, state-of-the-art gadget.

Wolves could even be the perfect debut opponent for Bruno Fernandes’ debut, what with their Portuguese contingent. There should be no immediate trepidation at whether such a renowned sh*thouse can adjust to a more physical style.

And there really is no excuse not to strike while the iron is hot. United were clearly reluctant to sign anyone in January but Jesse Lingard, Andreas Pereira and Juan Mata collectively forced their hand. They need the inspiration and impetus of a Fernandes debut as soon as possible.

Manager to watch – Frank Lampard
Chelsea have won just two Premier League games against teams that started the day above them in the past 12 months. The Blues will look back far more fondly on how they overcame third-placed Tottenham in February when they themselves were sixth than they will beating 12th-placed Norwich after a poor start to this season left them 16th.

That in itself shows that their current issues are not isolated to Frank Lampard’s reign. Some residual problems that set in under Maurizio Sarri continue to linger throughout a squad in drastic need of freshening up.

But the Chelsea manager really needs a statement victory, one he can point to as a sign of progress, personal and collective development and lessons learned during his short tenure. A win away at Leicester would feel genuinely transformative.

It is certainly possible. As inconsistent as Chelsea have been – their only successive league victories all season came in that six-game winning run from September to November – the Foxes are also stumbling. Matches against West Ham have accounted for two-thirds of their league wins since mid-December, and defeat in the League Cup semi-final will have stung.

Not since September 2017 have Chelsea beaten Leicester in the Premier League. Both have changed managers twice and exponentially improved their squads since. Yet they share a tendency to self-implode under the sort of pressure that will be generated with another setback.

Team to watch – Arsenal
“We are in a process and are going in the right direction but I think tonight is a special night for everybody,” said Mikel Arteta. “Time will tell if this is a stepping stone, but at least I saw a reaction.”

That rather neatly sums up the conflicting emotions surrounding Arsenal’s 2-2 draw with Chelsea almost a fortnight ago. The general feeling was of a club pulling together, rallying and rebounding when another disaster was imminent. But this is an optimism doused in caution, equal parts positivity and wariness. Fingers have been burned too often before.

Much of it depends on the chosen perspective. Arsenal have won just one of seven Premier League games under Arteta; they have lost only one, too. They have scored as many goals as relegation-battling West Ham since the Spaniard’s appointment, but have conceded fewer than Manchester City in that time. The glass, as it stands, is either half full or half empty.

A visit to Burnley is a perfect opportunity to tip the balance further in favour of the former. The fallacy of Turf Moor being ‘a tough place to go’ should be exposed by a side that has theoretically found its feet. The Clarets beat Leicester earlier this month but have taken five points from their last 21 games against Arsenal, Chelsea, Liverpool, Manchester City, Manchester United and Tottenham at home, scoring 12 goals and conceding 45.

Football is a fickle beast. Win and discussion will only be of progress and possibilities. Fail to do so and questions might start to surface.

Football League game to watch – Wayne Rooney’s Derby v Stoke
Were the Championship table comprised only of each club’s last six results, there would be an understandable deluge of complaints, and Derby and Stoke would both be in the play-off positions.

The reality is that 16th hosts 20th on Friday evening, but both have shown recent signs of a renaissance. Derby had a seven-game unbeaten run curtailed by Luton in midweek, while Stoke have won three of their last four games with a hat-trick of successive clean sheets. Only Nottingham Forest have been as impressive since the turn of the year.

August’s meeting produced a compelling 2-2 draw, with which Nathan Jones was “devastated”. His November sacking for Michael O’Neill has heralded the sort of turnaround Derby wish Phillip Cocu could emulate across the Midlands.

But their form at Pride Park offers more than a glimmer of hope. Only Preston have won more points at home than Derby; only Wigan, Barnsley and Luton have lost more games away than Stoke. It is a script designed to be ripped up.

European game to watch – Ajax v PSV
Not since 2013/14 have either Ajax or PSV finished outside the Eredivisie’s top three. While de Godenzonen are holding up their end of the bargain this season, de Boeren are struggling.

PSV are hardly battling relegation, mind. Even with Mark van Bommel’s mid-December sacking they are fifth and one point behind third-placed Feyenoord. Ernest Faber, unbeaten in his opening three games, is not fighting an uphill battle.

But Ajax are one of two clubs that have pulled clear of the chasing pack. They and AZ Alkmaar have established a healthy cushion to the rest in the Champions League qualification spots, with only an unexpected Champions League exit marring an otherwise fine season for last campaign’s semi-finalists.

Erik ten Hag does have to address a domestic slump that has dragged over the winter break. Ajax lost two of their three games before the league’s pause, returning with a win over Sparta Rotterdam and defeat to Groningen. PSV will relish the opportunity to make matters worse.